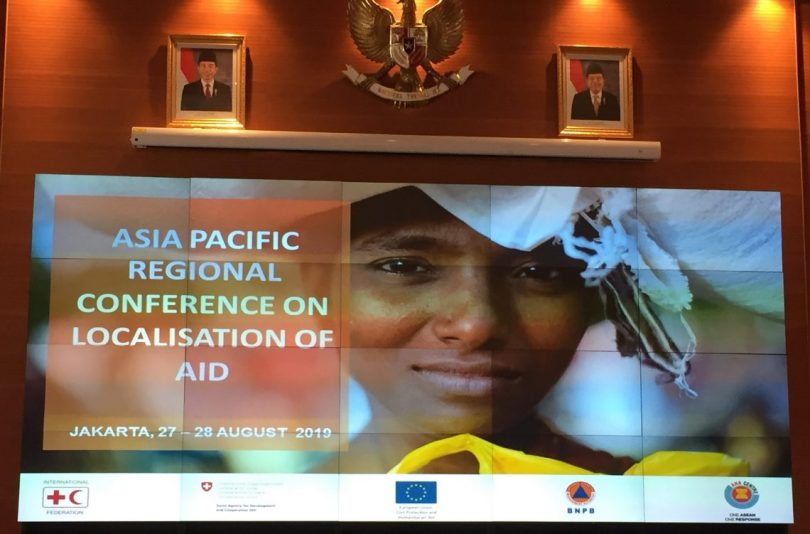 The international humanitarian sector has in recent months been undertaking another round of reflection and soul searching. Dialogue at the recent Humanitarian Affairs Segment at ECOSOC and findings from the Grand Bargain independent 2019 report from ODI paint a mixed picture of progress against global humanitarian reform commitments. In August, Jeremy Konyndyk at the Centre for Global Development published Five takeaways on the future of humanitarian reform, a summary of recent high level discussions on modernising the humanitarian model. He presents a sobering analysis of the ongoing challenges and increasing pressures on the humanitarian system, and the inability of the system, and lack of political will and space, to make fundamental changes.

One of the key reform areas championed by the humanitarian sector in Australia is the localisation of humanitarian action, documented here and here. While the most recent Grand Bargain report identifies that localisation has become a key normative principle in humanitarian action, it counters by arguing there has been no system-wide shift in operational practice. Funding direct to local humanitarian actors remains low, sitting at 8% in 2018, far short of reaching the target set by the Grand Bargain of 25% by 2020. A key challenge for the Australian sector is making sense of this global data and dialogue and testing the findings in our region.

In an attempt to shine a light on national and regional experiences of localisation in our region, a multi-stakeholder conference of more than 20 countries from Asia and the Pacific was held last week in Jakarta. It looked to “ground” the vertical global policy discussions on localisation and identify where and how shifts in humanitarian practice are taking place at the country level.

Over the two days, a number of key themes emerged: the strong role of ASEAN states in developing national state capacity for management of natural disasters; the increased mandate of the ASEAN Coordinating Centre for Humanitarian Assistance (AHA) taking on regional logistics and coordination, a role usually reserved for the UN; a call for good donorship to incentivise flexible localised financing models less encumbered by excessive compliance; and a call to radically reconceptualise capacity strengthening away from the current focus on capacity building. A strong narrative emerged confirming that localisation is in fact a driving issue in the region. This was captured by the Executive Director of the AHA Centre, Adelina Kamal in her opening statement that “localisation is the new norm of humanitarian action in the region.”

Lessons from Asia and the Pacific

A panel of senior government officials and civil society from Indonesia reflected on the significant shifts and lessons that have emerged following the response to earthquakes in Lombok and Sulawesi in 2018. One of the most striking features of this response is that the Government of Indonesia did not request international assistance, instead looking to national and local responders, including large domestic civil society organisations such as the Muhammadiyah Disaster Management Centre and the Indonesian Red Cross. This should not have come as a surprise to the international humanitarian community, given the significant investments the Government of Indonesia has made in the last decade to re-shape its national disaster management capacity. As a case study of localisation in action, the experience in Sulawesi provides important insights.

The emergence of potentially disruptive localised funding approaches was another key topic. The START Fund Bangladesh presented its model for the rapid and targeted distribution of funding to local NGOs, with its first national disbursement taking place in June. Funds were disbursed in less than 72 hours directly to local responders, reducing the time and costs normally associated with multi-layered international funding mechanisms. This rapid disbursement process is backed by the START network’s own mapping and assessment of local capacity and domestic fundraising. The Shared Aid Fund for Emergencies in the Philippines (SAFER) also presented on its consortium model of national agencies using digital fundraising and crowd sourcing to directly support local and first responders.

Speakers from Pacific countries noted that localisation is not a particularly new concept for them. Rather, there is a long history of local disaster response in Pacific countries, reinforced by local coping mechanisms and traditional knowledge. The Head of the National Disaster Management Office in the Solomon Islands highlighted that Pacific countries have developed coping strategies and good regional cooperation, with which the international system needs to align, and not replace. As such, humanitarian dialogue and practice needs to be strongly integrated within national and regional policy frameworks, such as the Pacific Resilience Partnership.

In an emerging but important discussion about the impact of localisation on the role of Australian-based organisations, Australian Red Cross shared its experience of transforming its international program model. This new model is focused on reducing the organisation’s direct footprint while strengthening the capability of local partners, which has meant embedding support through core funding and institutional strengthening across key areas of governance. This includes investments in legal systems, human resources, financial development and local fundraising – areas that have typically been ignored and underfunded by donors and partners in the past.

Lessons from the local to the global

The regional conference was a useful step in identifying how and where localisation is taking place at the country level in Asia and the Pacific. In the absence of a regular forum for discussing humanitarian reform in our region, it was an opportunity to assess change and progress. Thankfully the debates around definitional issues, which have tended to stall some of the global level discussions on localisation, did not surface. Rather, the conference identified strong appetite and capacity for, and positive examples of, localisation, and underlined the changing humanitarian architecture in the region – all important findings to inform the global dialogue.