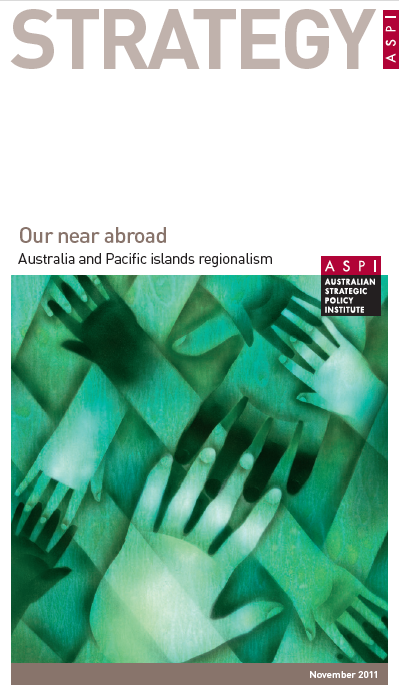 Australia needs to change its strategy in relation to Pacific islands regionalism, according to a new report by the Australian Strategic Policy Institute (ASPI). The report’s authors, Professor Richard Herr and Dr Anthony Bergin, argue that Australia should repair its relations with Fiji, downplay the Pacific Plan, seek to engage China and sub-regional organisations such as the Melanesian Spearhead Group, and facilitate labour mobility for Pacific islanders.

Our near abroad: Australia and Pacific islands regionalism, details the dwindling support for a regional system established with considerable effort by Australia. It outlines, with some concern, how Pacific island countries are instead pursuing their objectives bilaterally and through sub-regional groupings that exclude Australia.

The report has made headlines in the Pacific islands press. The anti-Australian Fiji Sun ran the headline: Australia’s Fiji folly damned, for an article written by Graham Davis, a well-known critic of Australia’s sanctions on Fiji. The Pacific News Service chose a title that was only marginally less critical: Australia told it has to repair relations with Pacific states.

The report is more measured than these headlines suggest, with a comprehensive assessment of Australia’s role in Pacific islands regionalism.

The report does find that the Australian Government is responsible for a decline in Pacific islands regionalism, given its use of the regional system to censure the most important member of the regional family, Fiji. This has led to paralysis within the Pacific Islands Forum (PIF), with regional discussions instead moving to other regional fora (such as the Secretariat of the Pacific Community (SPC)). At the same time, sub-regional groups such as the Melanesian Spearhead Group (MSG) have benefitted from the Australia-Fiji conflict, with Fiji using its voice in such groups to undermine Australia’s regional integration agenda.

Other factors are also significant. The increasing presence of China in the Pacific islands, for example, together with its exclusion from the regional architecture, is partly to blame for the decline in regionalism. The report recommends promoting Chinese engagement in the regional system, possibly though participation in law enforcement processes.

A third reason for the decline in regionalism relates to the Pacific Plan’s attempts to rationalise the regional system. Herr and Bergin argue that the Pacific Plan, in seeking to establish a better integrated and coordinated regional system, has instead exposed that system’s problems. In doing so, it has failed to address the bifocal nature of Pacific island regionalism. The SPC continues to provide capacity supplementation (the report eschews the term “capacity building”) to its broad membership base; assisting countries meet the obligations of statehood. At the same time, there exists a parallel form of regionalism with the PIF at its centre, which focuses on political integration, albeit with a membership restricted to independent states.

Herr and Bergin also argue that the Pacific Plan has been poorly implemented, and has become associated with an Australian agenda for donor coordination. They consequently argue that Australia should downplay the PIF initiative, instead engaging with sub-regional organisations.

One issue the report downplays, in my opinion, is the divide between Melanesian and Polynesian countries. This results in a tendency to exaggerate the role of Australia in the decline of Pacific islands regionalism.

The Melanesia/Polynesia divide is an important reason for the rise of sub-regionalism in the last decade, as well as the decline of regionalism. A clear divide has existed since independence. Descriptions of the “Pacific Way”, first articulated in a United Nations address by Fiji’s Prime Minister, Ratu Mara, have always emphasised established hierarchies that are more representative of Polynesian rather than Melanesian polities. The “Pacific Way” has also been far more accommodating of colonialism than have been proponents of Kastom in Melanesia (see Stephanie Lawson’s paper on the “Pacific Way” and post-colonialism).

The report’s recommendations are generally valid, despite this oversight. A useful suggestion is that Australia should engage more effectively with sub-regional entities, including the MSG. This makes sense, considering the newfound importance of the MSG and the importance of Melanesia to Australia. Also valid are recommendations that will lead to better understanding of Pacific island countries in Australia, and support for a more effective Pacific islands labour mobility scheme.

Re-engagement with Fiji is a more controversial recommendation. Australia’s re-engagement with Fiji would facilitate regional integration, but could also serve to legitimate Fiji’s military government. The report argues, helpfully, that a compromise could be for the PIF to re-instate Fiji as a member, thereby facilitating dialogue between Australia and Fiji. This would reinvigorate the regional integration agenda, without seeming to legitimate the military coup, or requiring loss of face on the part of either the Australian or Fiji government.