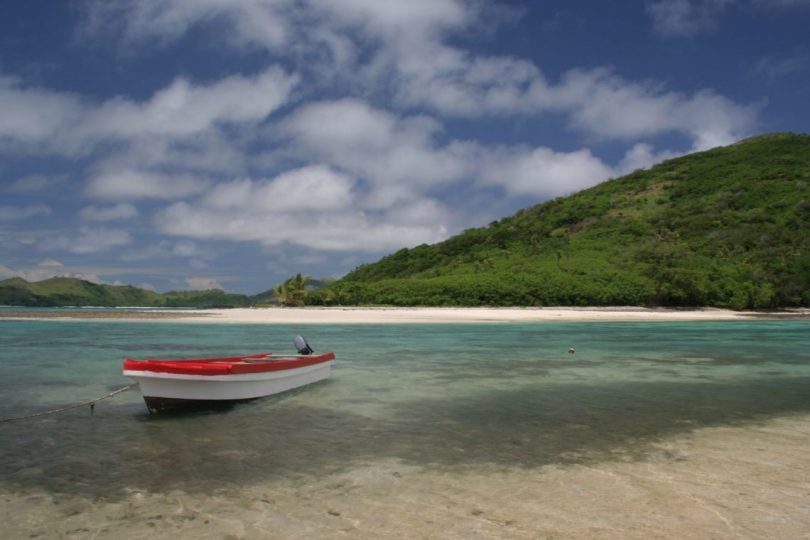 Fiji’s fiscal year begins in August, and the government brought down its 2020-21 budget in July. The most striking feature of that budget is that total expenditure in the coming year is budgeted to be virtually unchanged compared to the preceding two years. Adjusting for (mild) inflation, expenditure in 2020-21 is budgeted to be just 0.5% below expenditure in 2018-19, the year before COVID-19; in 2019-20, it was just 3% below the 2018-19 baseline. (You can see all the graphs in this blog or go straight to our Pacific Covid Economic Database.)

From one point of view, protecting total expenditure is an achievement. After all, Fiji has taken a massive hit to revenue, which fell by 16% (after inflation) in 2019-20, and is projected to fall by another 39% in 2020-21. What that means is that in the new year government revenue will be just a half of what it was two years earlier. This partly reflects some tax cuts given in the perhaps vain hope of stimulating the economy, but mainly the cessation of tourism. Fiji is projecting a 22% fall in GDP in the coming year.

Fiji gets minuscule amounts of foreign aid in the form of grants, so its only hope is to borrow, and that is what it is planning to do. In 2018-19, it had a deficit of 3.6% of GDP; in 2019-20, that increased to 8.2%, and in 2020/21 Fiji is projecting a whopping 20.2% deficit. This will be financed, it is planned, by a mix of domestic commercial and overseas official loans. The country is heading into uncharted territory with a projected debt/GDP ratio of 83%, and other problems – like having to bail out the country’s airline – adding to its fiscal stress.

Australian government revenue is also taking a hit, but nothing like the contraction Fiji is experiencing. Australian revenue in 2020-21 is budgeted to be at 93% of its pre-COVID 2018-19 level (compare Fiji’s 51%).

Australia, like Fiji, is also borrowing heavily. Our deficit is heading to 10% of GDP. We’re able to finance as much social protection as we want without having to cut expenditure at all.

These figures might seem abstract, but the implications are very practical. Fiji’s workforce has been badly hit by the collapse in tourism. The Fijian government estimates that 115,000 Fijians are unemployed or on reduced hours, which is one-third of the workforce. However, there is very little by way of a safety net to support these workers. Fiji is only budgeting $100 million in funding for unemployment assistance in 2020-21. That is 1% of GDP, one-quarter of the 4% of GDP that Australia will be spending on JobKeeper and other COVID-related income support.

The unemployed in Fiji are largely on their own. They are only eligible to receive government support once they have completely exhausted their own superannuation funds, and even then, will receive only FJD220 per fortnight. This is less than 20% of what an unemployed Australian will receive, even after the COVID-19 supplement is reduced in September. And if you didn’t have a formal superannuation-paying job to begin with, then you won’t get any support at all.

Could Fiji do more to help its poor, vulnerable and unemployed? It is cutting expenditure elsewhere in the budget. It has closed several embassies, and all politicians and heads of department are taking a salary cut. Even funds to pensioners, farmers and school kids were reduced in the new budget. Fiji’s government is borrowing as much as it can from all available sources. The country’s charities are certainly stepping up, providing school lunches and other support. But it is not enough.

Fiji needs more external support. Australia’s efforts so far have been tokenistic: $12 million in budget support is hardly going to make a difference. Offering to support the roll-out of a vaccine (out of existing aid funds) is good, but we can’t just sit back and wait while the people of Fiji suffer, perhaps for another year or more.

We can borrow as much as we want, and cheaply. We should offer some of that to Fiji, preferably at a concessional rate. Mat Tinkler of Save the Children has argued for a Pacific JobKeeper scheme. I agree. We should allow Pacific governments to set their own priorities, but make it clear that we will provide more funding in return for more assistance for households.

What we should not do is leave Fiji, and its thousands of unemployed, to flounder.

For more, see the Pacific Covid Economic Database and the other blogs in this series.