Fiji, Samoa and Tonga are three Pacific countries that start their fiscal year about mid-way through the calendar year. As we have analysed in earlier blogs in this series, all Pacific countries announced immediate fiscal responses to the arrival of the COVID-19 pandemic in March or April. While these short-term policy packages were important, they are not fully comparable. A budget gives a much more integrated basis for analysis.

Only Tonga is planning to boost expenditure in the coming year. 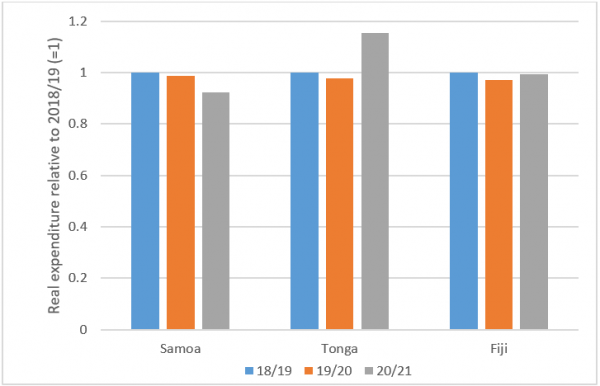 Why these disparate outcomes? The three countries have very different economies, with Fiji being much bigger, more reliant on tourism, and less aid dependent than either Samoa or Tonga. Fiji has taken a much bigger economic hit from the pandemic. Samoa and Tonga are also facing an economic contraction, but of a much smaller magnitude. As discussed in our first blog, this is primarily due to Fiji’s greater reliance on tourism, though Samoa’s projected small fall in GDP looks optimistic.

COVID-19 is wreaking more havoc in Fiji than in Tonga or Samoa. 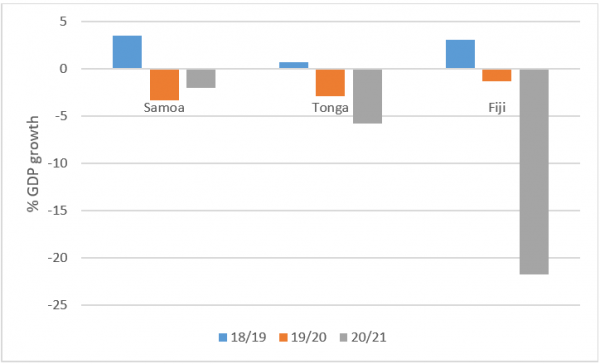 This differential growth impact is reflected in the countries’ own-revenue performance, with Samoa and Tonga experiencing moderate declines, and Fiji a major one. (Own revenue is total revenue minus aid.)

As a result, Fiji’s own revenue is taking a much bigger hit. 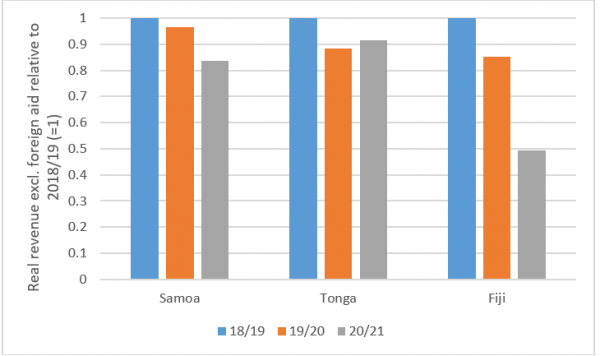 Samoa and Tonga are both aid-dependent, and both are projecting increases in their aid budgets, which will help offset their revenue declines. Tonga is projecting a larger increase, but, more importantly, aid in Tonga is about 80% of own revenue, whereas in Samoa it is only 40%. In Fiji, grant aid is just too small to make much of a difference.

In Samoa and especially Tonga,  aid increases help offset the decline in own-revenue; in Fiji, grant aid  is too small to make a difference. 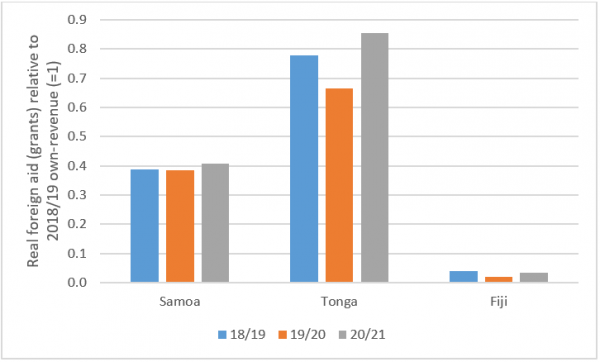 With their greater access to aid, Samoa and Tonga have not resorted to much borrowing. By contrast, Fiji’s deficit is blowing out to 20%.

Fiji’s deficit is about to go through the roof. 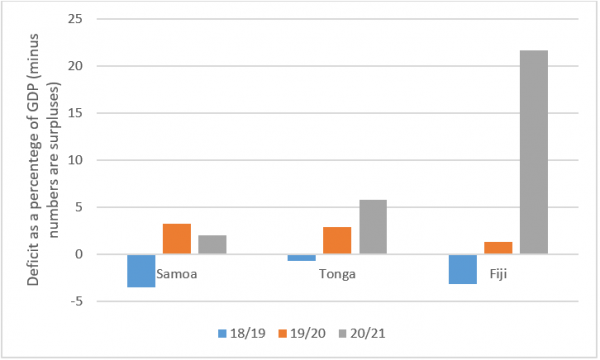 Official assistance is also important to Fiji, but it is receiving support largely “below the line”, in the form of a mix of concessional and non-concessional official loans from the World Bank, ADB, IMF, AIIB and Japan. Fiji is also able to borrow domestically, and is planning to meet about one third of its US$ 1.3 billion gross financing requirement locally.

As an inevitable consequence, Fiji’s debt stock is projected to increase from 50% to 80%, whereas Tonga shows a much more moderate increase, and Samoa actually a decrease.

So is Fiji’s debt 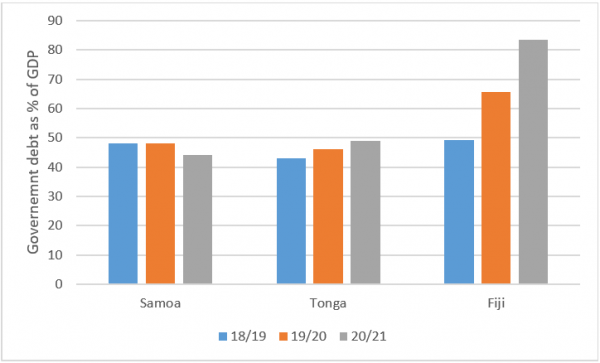 In summary, although superficially Samoa and Tonga look very similar to each other, and both different from Fiji, in fact all three countries lie on a spectrum. Tonga, with the smallest projected hit to own revenue and greatest aid dependency, is able, with increased support from donors, to increase aggregate expenditure at a time of need. Samoa, with a bigger own-revenue hit, lower aid dependency, and similarly limited borrowing capacity, sees a slight fall in aggregate expenditure. Fiji, with a massive hit to revenue and little grant aid, is able to protect government expenditure only by a massive amount of borrowing.

It all makes sense, but the tragedy is that Tonga is the only one of the three countries to be increasing expenditure at a time when all countries need to. Australia provides a useful benchmark. With only a minor decline in revenue, and virtually unlimited domestic borrowing capacity, Australia is increasing its aggregate expenditure in 2020/21 by 32% after inflation relative to 2018/19. That’s twice Tonga’s expenditure increase of 15%; Fiji shows no increase at all, and Samoa an 8% contraction in expenditure.

These different aggregate expenditure outcomes translate directly into the level of support that these countries can offer their people. Because it is so constrained, Fiji’s safety net support budgeted for 2020/21 is marginal: only directed at the formal sector and just 1% of GDP.

What more could these countries do? Only Fiji can borrow domestically at a significant level, and it is. Commercial foreign borrowing at the current time is off the table. All three countries have engaged in some expenditure restructuring, but this is hardly the time to push through radical expenditure reforms. That leaves the option of more external support, whether in the form of grants or concessional loans.

All Pacific governments need to be able to increase their aggregate expenditure to respond to the COVID-19 crisis. Of the three whose plans we have seen for 2020-21, only Tonga is planning to do so. This is a sure sign that more external support is needed at this time of crisis. Australia is the major donor for the region, and needs to step up.

This is the fourth Pacific Covid Economic Database blog, part of the #COVID-19 and the Pacific series.