The economic pain being inflicted by the COVID-19 crisis in the Pacific is unprecedented, certainly in the post-colonial era.

Unlike East Asia, which has transformed itself over the last 40 years into an economic powerhouse, income per capita today in PNG and the Pacific islands is not that much higher than it was in 1980, and in Timor-Leste (which we also include in this analysis) not much higher than at independence. High levels of underemployment and weak health systems made the Pacific island region highly vulnerable going into the COVID-19 pandemic.

Economic growth in individual countries over the last five years is shown in the figure below. Fiji is the standout performer, but its growth has been slowing since 2018. Other countries show recent average growth of about 1% or less. The PNG economy – the region’s giant – has been struggling since 2013, with weak growth outside of the resources sector and declining employment. 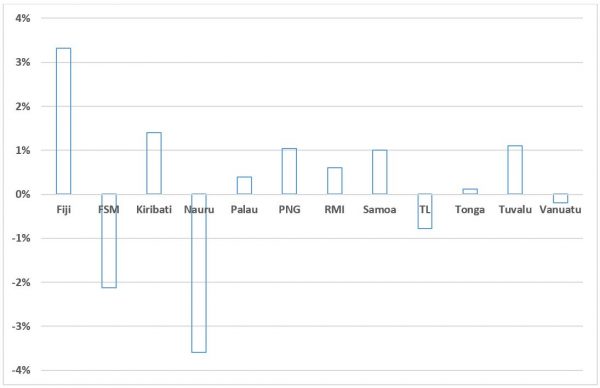 Source: World Development Indicators and country documents. Non-oil GDP for Timor-Leste and non-resource GDP for PNG. Growth for 2015-2019 for most countries.

And then came the pandemic. The figure below shows GDP growth for the current year for 14 countries, first as projected before COVID and then since. Overall, the differences are stark, and some of the post-COVID numbers still look optimistic. The range is also striking: Tuvalu and Kiribati are still projected to grow in 2020, while other countries are set to experience contractions ranging from mild to massive.

Economic growth in the Pacific: pre- and post-COVID

No doubt the variation reflects a high level of uncertainty about how the pandemic is playing out, but it also correlates with the reliance of various countries on tourism, the sector most affected by the pandemic, with a virtual cessation of international travel.

The figure below ranks countries by their percentage point hit on growth from COVID-19 on the vertical axis, and their tourism/GDP ratio on the horizontal axis. It’s not a perfect fit, but the three tourism-intensive economies of Fiji, Palau and Vanuatu have the biggest falls in GDP. In fact, the Fijian government reckons that one-third of the country’s workforce is now either unemployed or on reduced hours. At the other extreme, GDP is least affected in the countries with the least exposure to tourism (such as Kiribati and PNG). The other countries are in the middle. (By this approach, the downturn in Samoa looks underestimated.)

Reliance on tourism and the hit to GDP 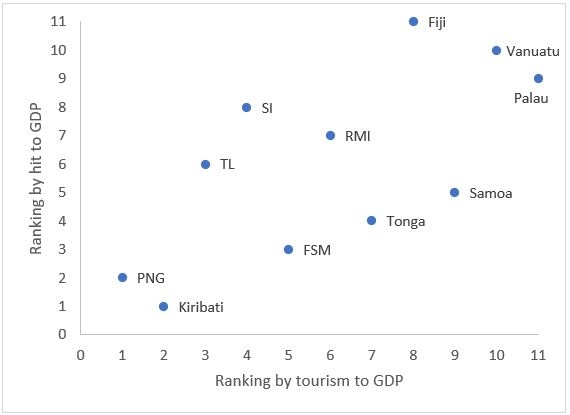 It is largely but not all bad news. One surprise is that many commodity prices have held up, including for timber, coffee and tuna, though not for oil and gas, and palm oil. (In the figure below, we show only the oil price since the gas price is linked closely to it.)

Commodity prices before and during the pandemic (January 2020=1) 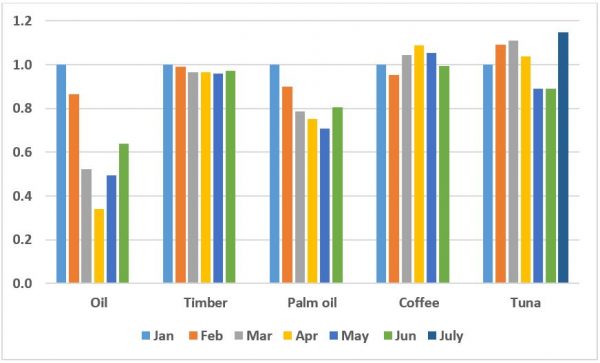 The oil and gas price fall is a good thing for most Pacific countries, who are oil importers. But most of Timor-Leste’s and almost half of PNG’s exports are oil and/or gas. Its export earnings have plummeted, something that isn’t captured in the constant-price GDP growth rates, but which can be seen from the fact that PNG is anticipating government revenue to fall by 15% due to the pandemic. (Recent mine closures will lead to a further decline in PNG’s GDP.)

The region’s aid dependency, in general a mixed blessing, is a strength at the current time. Ten Pacific island countries and Timor-Leste are in the top 20 aid dependent countries in the world. Aid, whatever its problems, tends not to follow the business cycle. While there is no sign that rich countries will increase their aid budgets, there is no sign of aid to the Pacific falling either. Most of this aid is not provided as flexible budget support, but rather is tied to particular donor projects. Nevertheless, this still provides an important source of support at a time of crisis, and donors are shifting as a result of the crisis towards budget support. 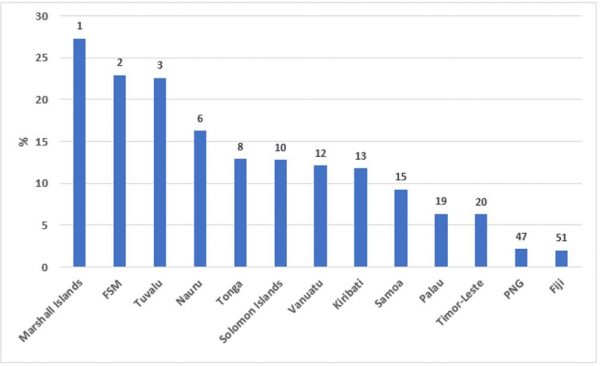 Finally, remittances, important to most Pacific economies, are expected to decline as Pacific migrants lose their jobs. One sign of hope though is a suggestion from the data that remittances may in fact be holding up. As the figure below shows, remittances to Fiji plummeted in April, but recovered in May and June. Samoan numbers show the same trend. Perhaps the diaspora is rallying, or perhaps this is an indirect benefit of the large stimulus packages being provided in countries such as Australia, which has actually led to aggregate consumption growth. 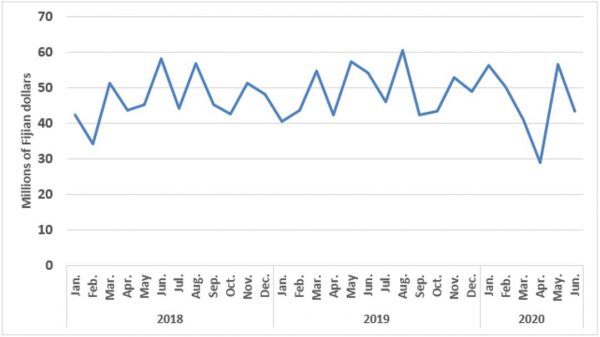 Even if aid and remittances stay strong, until travel is restored, Pacific economies will struggle. The most effective measures for growth are border reopenings: as Vanuatu is doing by participating in the SWP Northern Territory pilot, and as Fiji is attempting to do with its “Bula Bubble” pathway for tourists. But it takes two to travel, and any reopening will be gradual. In the meantime, the most potent tool Pacific governments have to cushion the COVID-19 economic blow are internal reopenings, and fiscal and other economic stimulus measures.

In this regard, the region is advantaged by the fact that many countries in the region have been running fiscal surpluses for several years, in part because of the enormous increase in fishing licence revenues. In several cases, these surpluses have been massive (as the figure below shows), and have led to the development of healthy cash balances, an ideal source of funding for emergencies. Where there have been deficits, they have mainly been moderate (though PNG is a notable exception – its deficit is underestimated due to a build-up of arrears). In addition, some Pacific countries have access to sovereign wealth funds – Timor-Leste, Kiribati and Tuvalu.

To assess what, given these various impacts and starting points, countries are doing on the economic front to respond to COVID-19, we have created the Pacific Covid Economic Database. There is no shortage of such databases, including ones of Pacific COVID policies, and of post-COVID aid to the Pacific. There are also regional and global databases maintained by the ADB, the IMF and the Growth Centre.

We wanted to create something that would allow us to make comparisons of economic policy across Pacific countries. Our focus is the stimulus packages countries have announced, and their 2020–21 budgets, as they are brought down. Our coverage is restricted to the larger economies of Fiji, PNG, Samoa, Solomon Islands, Tonga, Timor-Leste and Vanuatu.

We’ll be launching the Pacific Covid Economic Database on Wednesday 19 August, and sharing some analysis based on it in forthcoming blogs. We’ll also be hosting an online seminar on Wednesday where we’ll be discussing some of the findings, along with experts from DFAT, PNG and Fiji. Details here.

This is the first blog in the Pacific Covid Economic Database series. You can find the second blog here, third blog here, and firth blog here. It is also part of the #COVID-19 and the Pacific series.

Note: An earlier version of this blog contained misleading information about Timor-Leste’s oil exports. This has now been corrected [02/09/2020].