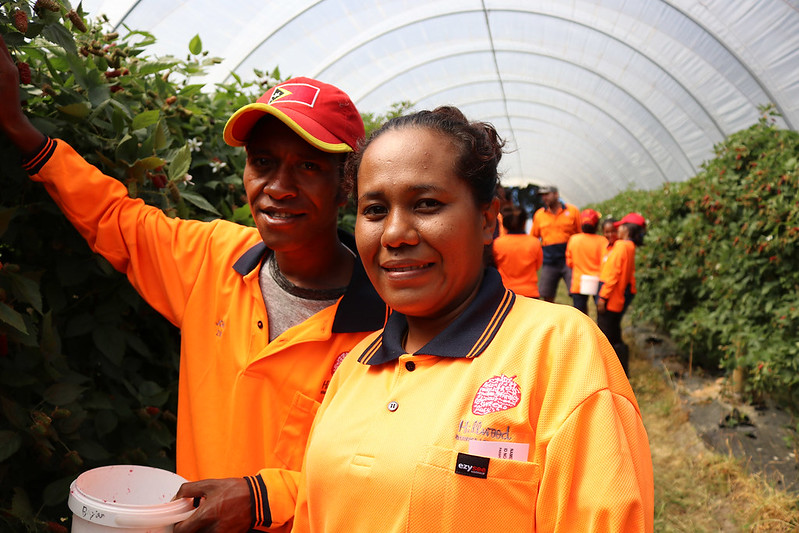 When our team at the World Bank set out to measure how temporary migrant workers from the Pacific had coped with the impacts of the COVID-19 pandemic, the survey data showed some surprising results about the resilience and sacrifices of migrant workers.

Despite significant disruptions to employment, earnings losses and health impacts, remittances from Pacific migrant workers seem to have weathered the storm of the pandemic. This is welcome news, because this lifeline will remain essential for the region for some time to come.

Our team conducted a series of phone surveys between June and September 2020 – at the peak of the first wave of the pandemic – to assess its impacts on temporary labour migration from the Pacific. The surveys covered temporary migrant workers from six countries (Fiji, Kiribati, Samoa, Timor-Leste, Tonga and Vanuatu), their households, employers, and the Pacific diaspora in Australia and New Zealand, with the findings published in our new report, Pacific labor mobility, migration, and remittances in times of COVID-19.

Here’s a quick summary of what we learned about workers employed through the Pacific Australia Labour Mobility scheme and New Zealand’s Recognised Seasonal Employer (RSE) scheme.

The pandemic and lockdown measures caused significant disruption to the employment of migrant workers. Two-thirds of seasonal workers reported a reduction in work hours, losing 18 hours a week on average, equal to a 37% decrease. Consequently, 68% of seasonal workers reported that their earnings between March and August 2020 were lower than in the pre-COVID period. Workers in the semi-skilled Pacific Labour Scheme (PLS) were also affected by the crisis, but to a lesser extent. This was likely due to their longer, non-seasonal contracts and higher income levels.

While 68% of seasonal workers saw their earnings fall, only 47% sent less money home. Similarly, 36% of PLS workers experienced income losses, yet only 18% reduced their remittances. Notably, about 40% of workers who earned less during the crisis either maintained or even increased their remittances, often at the expense of their own consumption and savings.

Impacts of the crisis on migrant workers were not only economic. Seasonal workers reportedly experienced high mental health burdens due to uncertainties related to their visa, repatriation, infection risk and the wellbeing of their families back home.

Turning to the households of migrant workers, the economic fallout of the COVID-19 pandemic led to decreases in the incomes that the households earned at home. In extreme cases, about 12% of surveyed households reported having no income since lockdown measures were first imposed in their countries.

In this context of hardship, remittances proved critical in supporting the livelihoods of worker households. About 91% of households mainly used remittances for food and daily expenses. Households with seasonal workers overseas (and thus, those who could receive remittances) reported lower levels of financial anxiety and spent about 17% more on consumption than those with workers whose trips were cancelled due to the pandemic. They were also significantly less likely to resort to coping strategies that would adversely affect them in the longer term, such as reducing consumption, depleting savings, selling assets and livestock, taking a loan, or pulling children out of school.

Across all surveyed countries, our study records cases of severe hardship associated with seasonal work cancellation. In Kiribati, for instance, several workers reported that their household’s only income source was copra cutting; and one reported their major source of livelihood since March 2020 was the senior citizen’s benefits that elderly family members received from the government. In Tonga, various workers had no alternative means of making money, and some had to harvest and sell their kava prematurely, while others pulled their children out of school.

Despite the overall negative impacts of the COVID-19 crisis and challenges with international travel, demand for labour mobility schemes has remained strong. The majority of seasonal workers surveyed (95%) wanted to return the next season, and employers (98%) were just as eager to have them back, with about 50% of all employers wanting to increase recruitment. Demand was particularly strong among labour hire companies, with 80% hoping to increase their intakes.

Workers also remained positive about their experience in Australia and New Zealand. When asked how satisfied they were with the schemes on a scale of 1, ‘not satisfied at all’, to 10, ‘extremely satisfied’, the average score was 8.0 among PLS workers, 7.8 among Seasonal Worker Programme (SWP) workers, and 8.2 among RSE workers. This high level of satisfaction was similar to findings from an earlier World Bank survey of SWP workers, with no clear pattern of changes.

This is positive for Pacific island countries and Timor-Leste. As the Pacific tourism industry and broader economies take time to recover in the years ahead, overseas employment will remain a vital source of income for many households in the region.

Future policy interventions to protect Pacific migrant workers from the ongoing impacts of COVID-19 – which have so far been limited in both home and host countries – could include the following:

The World Bank report, Pacific labor mobility, migration, and remittances in times of COVID-19, explores the impacts of the crisis and prospects for Pacific labour mobility in further detail.

This is an edited version of a blog originally published on World Bank Blogs, East Asia & Pacific on the Rise.

Dung Doan is an Economist in the World Bank’s Social Protection and Jobs team, focusing on jobs and labour market issues in the Pacific region.

Kirstie Petrou is a Research Associate with the Climate and Sustainability Research Group at Flinders University, and a Consultant with the World Bank’s Social Protection and Jobs team.