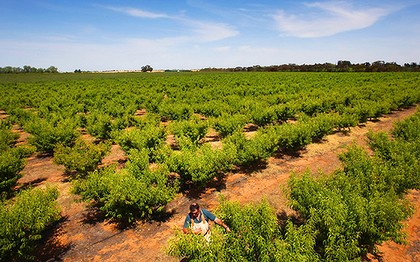 This is a guest post by Nic Maclellan. A version of this article appear first in Islands Business. It is published here as part of a series of articles on making migration work.

The Australian government has announced changes to its troubled seasonal worker scheme, in an effort to encourage more employers to recruit temporary workers from the Pacific islands.

Under the pilot, which runs until 2012, there are 2500 visas available for workers from four Pacific countries—Tonga, Vanuatu, Kiribati and Papua New Guinea—to work in vineyards and orchards across Australia.

As reported in Islands Business last August, Papua New Guinea had also signed a Memorandum of Understanding (MOU) with Australia to join the pilot, but no PNG workers have yet been recruited.

In contrast, the New Zealand Recognised Seasonal Employer (RSE) scheme draws up to 8000 workers a year, mostly from Pacific nations.

In the lead-up to the pilot, the National Farmers Federation stated the industry needed tens of thousands of extra workers for work in orchards and vineyards across Australia.

The announcement of the pilot in August 2008 was welcomed by the Pacific Islands Forum governments.

In Australia, unions and community organisations also cautiously welcomed the seasonal work programme as long as wages and conditions are maintained and “pastoral care” issues addressed (from providing adequate housing to assisting with social, sporting or spiritual care outside of work hours).

Since then, only small numbers of growers have worked with middlemen known as “Approved Employers” to recruit islands workers.

An interim evaluation of the first phase of the pilot prepared by TNS Research was submitted to the government in July 2010, suggesting changes to the scheme.

But approval of these changes was delayed until December by the Australian elections and the formation of a new government in Canberra.

The TNS evaluation notes that: “The biggest issue for the pilot moving into phase two is increasing the participation of growers and Approved Employers (AEs).

“Changing labour market conditions, prevalence of alternative sources of labour, together with relative costs of alternative labour, have emerged as issues impacting demand for PSWPS workers.”

The evaluation found that “the length of stay and guarantee of minimum hours for PSWPS workers may have prevented some growers and AEs from participating in the pilot.”

It also notes that the horticulture industry raised concerns about the lack of marketing of the pilot to growers and about the experience of some AEs in placing seasonal horticultural workers.

Officials blame the slow start on the global financial crisis and the surge in working holiday makers arriving in Australia in recent years, with the TNS interim evaluation noting: “The pilot was implemented during the global recession, which at the time was having a significant impact on Australian and global economies, resulting in increased rates of unemployment (peaking at 5.8% nationally in 2009, from lows of 4% in 2008), reduced job vacancy advertisements in 2008 and 2009, self-funded retirees re-entering the workforce and an increase in seasonal workers who arrived on holiday and work, and student visas.”

However, New Zealand went through the same financial crisis (without the benefit of Australia’s mining boom) yet still managed to recruit thousands of workers each year under its RSE programme.

In contrast, just 10 ni-Vanuatu workers came to Australia in 2009-10, so there’s growing concern about the commitment to this key plank of Australia’s engagement with the region.

According to Senator Evans, the changes announced last month “better meet the evolving needs of the horticulture industry and mean a greater number of Pacific seasonal workers will have the opportunity to participate”.

Until now, Approved Employers (AEs) had to guarantee a minimum of six months work at 30 hours per week.

But according to the interim evaluation, there was widespread concern that the requirement for work over a six-month period was too long.

“This requirement was seen as the most significant barrier to the engagement of growers and AEs, who generally only need workers for three to four months.”

With these changes, Pacific workers may be away from home for a shorter time but will have to work longer hours each week in the vineyards and orchards to meet the guaranteed minimum.

Another change to the pilot scheme is shifting a greater amount of the cost for international and domestic travel to the overseas worker rather than the Approved Employer or grower.

Until now, Approved Employers have paid upfront for international airfare but can recover up to half the amount from the seasonal workers.

With airfares from Port Vila more attractive than the long trip from Tarawa, this arrangement disadvantages i-Kiribati workers.
Under the new regulations, employers can recover varying amounts of the workers’ return airfare depending on the country: Kiribati (35 percent); Tonga (50 percent): Papua New Guinea (55 percent) and Vanuatu (80 percent), with the worker paying the remaining amount.

Darren Hooper, of the Department of Education, Employment and Workplace Relations (DEEWR), says: “The aim is that employers will pay roughly the same dollar amount for international airfares whether the workers come from Tonga, PNG, Vanuatu or Kiribati, so no country has a competitive advantage purely based on airfares.”
Previously, Approved Employers also paid all transfer costs from the point of arrival to the location where workers are housed. In contrast to New Zealand—where horticulture regions are close to international airports—many sites in rural Victoria, NSW and Queensland are located some distance from major cities.

The new changes mean that an extra charge can be levied on the Pacific worker to pay for domestic as well as international travel. Approved Employers can now recover up to $100 from each Pacific seasonal worker for these travel expenses within Australia.

Even with these new changes, which shift the burden of some costs away from the growers towards the workers, sectors of industry are still unenthusiastic.

Frank Battistel, chair of the growers group Riverina Citrus, told ABC Radio: “I’m happy the government is listening and making changes and hope they continue to do that.

“But the changes they’ve made to-date are not something that’s going to knock us all over and say let’s rush out and employ a heap of Pacific islander people.”

As well as providing guaranteed temporary labour to Australian and New Zealand employers (reducing training costs if workers return for a second or subsequent years), these schemes are designed to increase remittance flows to Pacific households and communities.

New Zealand’s RSE programme has shown clear development outcomes for workers from Vanuatu and Tonga.
Researchers led by Professor John Gibson of Waikato University have surveyed 900 households in Tonga and Vanuatu and found that per capita incomes of households participating in RSE increased by over 30 percent relative to comparable groups in both countries.

There are also educational benefits from increased remittance flows: in families of RSE workers, school attendance rates for 16-18-year olds increased by 20 percent.

Beyond monitoring wages and conditions, there is a crucial need for “pastoral care” for overseas workers in seasonal workers scheme.

But the TNS interim evaluation of the Australian pilot, looking at the experience of the first 56 workers (50 from Tonga and six from Vanuatu), found “consistent concern from government and industry stakeholders that pastoral care provisions were inadequate in phase one.

“Generally, it was felt that having the responsibility for pastoral care sitting with the employer was inappropriate to meet the needs of PSWPS workers without an over-arching framework and external monitoring.”

Since that time, extensive work has been put into strengthening support programmes, drawing on local government authorities and community organisations. But government monitoring of conditions is resisted by some employers, who regularly cite the need for “flexibility” and a reduction in government regulation.

DEEWR officials are hopeful that another 300 visas may be issued before mid-2011, but Pacific countries are required to exchange letters with the Australian Government to amend their Memoranda of Understanding and reflect the changes announced in December.

Further delays will limit the number of people recruited before a final evaluation of the scheme scheduled for August 2011, when DEEWR and the pilot taskforce will make recommendations to government on the future of the Pacific seasonal worker recruitment.

When asked whether enough people will participate in the scheme for a proper evaluation to be conducted, a spokesperson for Senator Evans stated.

“We believe that an appropriate evaluation can be undertaken with the numbers that are expected to come through the pilot over the next six months.”

The Australian government has stressed that the seasonal work programme is dependent on employer requests for overseas labour, and that local workers should not be displaced.

Senator Evans states that “The pilot will continue to be demand driven so that Australian job seekers have first access to available job opportunities.”

In contrast, there have been calls from the Pacific for guaranteed access for unskilled labour to be locked in through a treaty such as PACER-Plus.

Government officials declined to discuss whether the government consider the use of quotas or formal commitments for set numbers of seasonal workers, with the spokesperson for Minister Evans stating: “The final evaluation of the Pacific Seasonal Worker Plot Scheme will consider arrangements to be put in place for any ongoing scheme.

“As PACER-Plus discussions are at a very early stage, it would be premature to comment on the likely outcomes of the negotiation process.” Evans’ spokeperson said.

Nic Maclellan works as a journalist and researcher in the Pacific islands and is co-author of La France dans le Pacifique (Editions La Découverte) and After Moruroa – France in the South Pacific (Ocean Press).