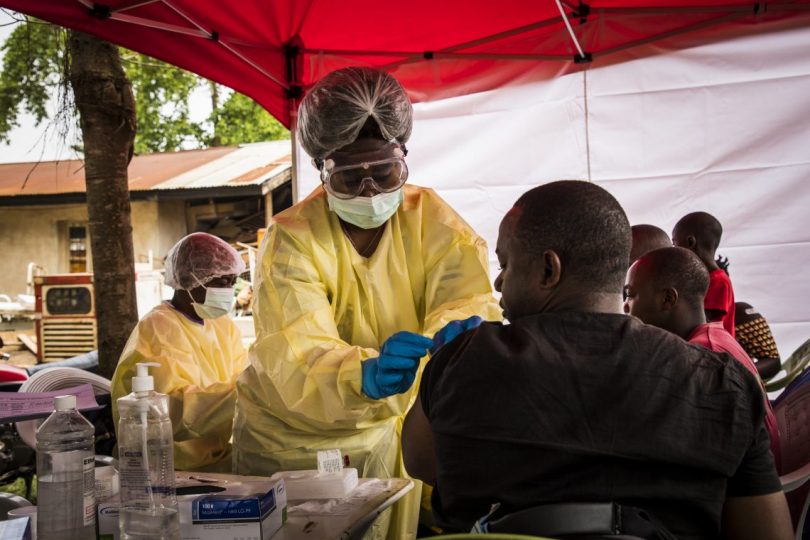 You wouldn’t know living in Australia, but the world is in the grip of a second major Ebola outbreak in five years. Ebola, a virus spread through direct contact with body fluids such as blood from infected individuals, kills about half of those infected. The current outbreak – which started in the Democratic Republic of the Congo (DRC) and which, as of last week, has crossed into Uganda – has killed more than 1,400 people and infected at least 2,000.

That epidemic and the consensus that the response by the World Health Organisation (WHO) and others was inadequate, led to multiple major reviews of WHO and global policy, capability and response mechanisms, and led to significant restructuring including development of a new WHO emergency framework.

At the time, as fear of a global outbreak spread, Australia instituted enhanced screening of incoming passengers at international airports (inappropriately and inaccurately focusing on all those coming from the continent of Africa even though there were Ebola cases in Spain and the USA, and a country like South Africa is more than 5,000km away from Liberia).

Like much of the global community, Australia was slow to act in addressing the epidemic at its source in West Africa. Eventually, the Australian government contracted a private company to set up and staff a treatment centre in Sierra Leone.

The evident shortfalls in Australia’s response and preparedness and the increased recognition of global risks, led DFAT to create the Indo-Pacific Centre for Health Security in 2017, a $300m initiative over five years that represents one of the government’s largest and highest profile aid commitments.  The Centre recognises the need to better prevent, detect and respond to outbreaks and has funded projects across the region and product development for priority diseases.

The Australian government has clearly made health security and outbreak response a national priority.

Yet, amidst one of the greatest and scariest disease outbreaks since the government’s flagship commitment to infectious disease control, there has been nary a peep out of this country.

Not one press release, not even a tweet from DFAT or the Centre or Australia’s Health Security Ambassador.

The outbreak in the DRC and now Uganda represents the future of infectious disease outbreaks: occurring and spreading in fragile states which, in this case, is also an active war zone.  Eastern DRC has been enmeshed in a decades long conflict that has involved multiple other countries to the point where the conflict is locally called World War Three. Such outbreaks are more likely to occur in parts of the world where health services are poor and where people do not trust government: indeed, in this outbreak, more than 40% of people are dying in communities, not in health facilities.

It is no coincidence that the 2014 Ebola outbreak occurred in Liberia, Sierra Leone and Guinea, countries that, like DRC, had endured conflict, regional war and coups amidst general instability.

The only engagement by Australia was a May 2018 commitment of $4m to the WHO’s Contingency Fund for Emergencies which could be allocated to the DRC Ebola outbreak as well as a contribution to the World Bank’s Pandemic Emergency Financing Facility.

It is important – amidst the complete silence by the Australian government – to ask why Australia might be ignoring this crisis.

The Australian Centre is called the “Indo-Pacific Centre” and Australia might be taking its regional commitment as a firm line in the sand in terms of engagement. This line in the sand seems to extend to even publicly acknowledging the outbreak and expressing solidarity. This would be in line with Australia’s complete neglect of Africa since 2012.

Another possibility might be that the DRC outbreak is regarded as simply too hard and too scary. An active war zone with health workers being targeted and with international agencies cautious about how to engage might just lead Australia to put this one in the “too hard basket”.

A last possibility is that the outbreak has still not been declared a “public health emergency of international concern”.  Despite three reviews and extensive criticism, WHO has not deemed this outbreak to warrant a statement that it requires a “coordinated international response”. Perhaps Australia is waiting patiently while WHO and a few NGOs bear the brunt of the crisis.

Sydney is hosting the world’s first Global Health Security Conference this week with a large number of the most senior stakeholders in global health converging on Sydney. Australia is ready to demonstrate its global leadership in health security through this conference.

But with leaders such as John Nkengasong, the Director of the Africa Centres for Disease Control and Prevention, in Sydney, can Australia legitimately remain silent about the greatest health security crisis facing the global community?

There remains a large funding shortfall which is likely to increase with the crossing into Uganda of cases. And Australia does have a diplomatic presence in Kenya, one of Uganda’s neighbours and could assist the US Centers for Disease Control and Prevention in its efforts to help prepare neighbouring countries for possible spread.

Future outbreaks are most likely to emerge in such fragile settings – not only in Africa but in environments such as Papua New Guinea, Southern Philippines or Myanmar where health systems are weak and trust in government is low. Gaining experience and expertise would strengthen Australian capacity to be prepared for the inevitable future infectious disease crises looming on the regional horizon. Staying silent and inactive makes no sense and undermines the leadership credentials Australia is trying to establish in the global health security space.