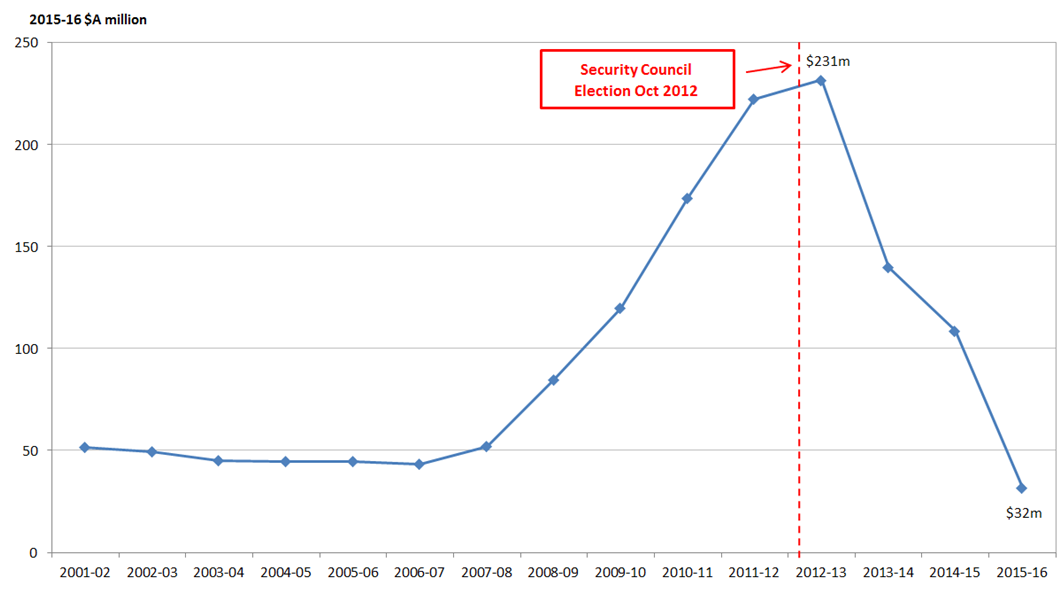 The Australian aid program to Africa is – for all intents and purposes – no more. The Africa program has been sliding down a cliff top for a couple years and it has now hit the ground with a thud. From a high of $231 million (adjusting for inflation) in bilateral AusAID/DFAT spending in 2012-13 (and more than $400m including all Australian aid ), the estimated spending on African programs for 2015-16 is now $32 million ($94 million when including global spending).

So effectively, Australian bilateral aid to Africa is finished.

Australian aid to Africa was very stable from the early 1980s through about 2006 – representing a small percentage of total ODA. A dramatic increase in African aid commenced with the Rudd Labor government in 2007 with the biggest escalation occurring in the 2010-11 and 2011-12 budgets.

The cuts started in the Abbott government’s first budget of 2013-14 when aid to Africa was slashed 40% and was continued with another 23% cut in the 2014-15 budget. At its height, as a percentage of total aid, total Australian ODA to Africa was just above 7%. Now it is just 2%.

The cuts are most often seen as part of the Abbott government’s focus on the Indo-Pacific region (more on that later) and a repudiation of the Labor government’s aid expansion. Indeed, the dramatic increase in aid to Africa has been cited as one of the reasons for rationalising aid spending. So one angle to explain the reduction is the change in government and a change in focus to emphasise “our region” as the Foreign Minister often repeats.

Overlaying the date of the election for a seat on the Security Council (18 October 2012) onto the figure of Australian aid to Africa tells a different but clear story. In the two years before the election, aid to Africa skyrocketed and then, after the seat was secured, aid to Africa plummeted just as rapidly. By the time Australia vacated its temporary seat in New York at the end of December 2014, African aid was back down to where it was before the campaign for votes began.

As someone who has long campaigned for increased aid to Africa and a deeper Australian engagement in Africa – on the basis of need, opportunity, genuine Australian expertise and a growing role for Australia as an important global actor – the figure below pains me in how clear it is and how evident the cynical conclusion must be. In retrospect, Australian aid to Africa looks like a (successful) political machination to get Australians a seat in New York.

Looked at through the lens of the Security Council seat explains some of the characteristics of the expansion of Australian aid to Africa. First of all, the expansion was not characterised by a dramatic deepening of country level collaborations but rather the implementation of a 54-country roll-out. Scholarships and short-courses quickly expanded to reach almost the whole continent; promises of aid were made to countries like Togo where Australia had little capacity to invest wisely; and new aid offices were opened in Accra and Addis Ababa. The 2011 Independent Review of Aid Effectiveness rightly criticised the continent-wide expansion and argued for deep and substantial country-programmable aid to only a small number of countries.

It must be noted that if the push for a Security Council seat was actually one of the main drivers of the increase in aid to Africa, that was driven not from then-AusAID but rather by DFAT priorities. Indeed in all the discussions I had with aid program officials, they all quietly confirmed that the pan-African 54 country strategic push was driven by DFAT, not AusAID.

So for the Foreign Minister and commentators to criticise and punish AusAID for uncontrolled expansion and use that as a rationale for subsuming the agency under DFAT when that expansion was driven by DFAT is like putting the fox in charge of the henhouse and blaming the hens for provoking the appetite for the fox.

As the death dirges are sounded, it is appropriate to look back at the past. Despite the cynical conclusion above, the Australian aid program in Africa achieved a considerable amount and was, in my opinion, characterised by some of the most committed and hard-working aid officials that I have seen within AusAID/DFAT.

For the first time, Australia developed a clear strategy for Africa that embraced the Indian Ocean more directly titled Looking West: Australia’s strategic approach to aid in Africa 2011-15. In addition, contrary to AusAID practice at the time, a number of senior aid officials were retained on the Africa desk or in an African post for more than the normal three years. This meant that at least part of the Africa team was not subject to the rapid turnover that weakens aid practice. It also meant that the Australian aid program in Africa benefitted from institutional knowledge and a deeper understanding of African aid issues.

The Zimbabwe program stands out as a model of what could have been achieved more broadly in Africa. The biggest bilateral program on the continent of about $50m per year, a small but committed team of aid officials in Harare were able to help Australia “punch above its weight” as noted by the head of the DFID program in Zimbabwe. Focusing on food security and water and sanitation, the aid program helped the country recover from the cholera outbreak that was driven by a total breakdown of water systems. Australia, despite its size and remoteness, was able to contribute meaningfully to policy discussions in a number of sectors and be seen as an honest broker and collaborative partner.

Despite the complexity of the massive expansion of the scholarships program, one cannot deny that the Australian aid program provided opportunity to a large number of Africans to build their capacity and skills in Australia and in Africa through masters level study and short courses. My own work on the topic leaves little doubt to the individual-level impact of such scholarships on the recipients.

The African expansion also led to a notable shift in how African postings were regarded by DFAT staff. Where they were previously regarded as a dead-end posting, they came to be seen as an opportunity for learning, growth and impact.

The Africa program also served as a precursor to the shift to the aid for trade paradigm with a massive investment in support for extractive industries on the continent. The Australian government provided substantial levels of funding to training of mining officials on tax, trade, mining practices, social impacts of mining and other related activities. Indeed, on DFAT’s current African aid page, “extractives for growth” comes first as the leading priority. Agriculture – another sector that can be easily linked into the vague aid for trade definition – comes second.

So what does the future hold for the African aid program?

Perhaps some limited maintenance of extractives and agriculture as part of Australia’s contribution to aid for trade. Perhaps some scholarships. Perhaps the engagement with Africa will become one of humanitarian assistance only – delivered through global funding and NGO partners.

There is a glimmer of hope in that DFAT’s recent Performance of Australian Aid 2013-14 finally defined the Indo-Pacific region and explicitly included countries “bordering the Indian Ocean in East and Southern Africa”. So as long as Africa is part of the Indo-Pacific, then aid to countries such as Kenya, Mozambique, Tanzania, South Africa, and Somalia would allow DFAT to meet its performance indicators. But this does seem to mean that aid to Zimbabwe is likely to be cut or deprioritised – largely because the waves of the Indian Ocean do not touch Zimbabwe – which is not a strategy grounded in effectiveness but rather adherence to an arbitrary made-up definition of “our region.”

In terms of the longer term future, there are already murmurs about the government planning its next Security Council bid so we can cynically assume that aid to Africa will be in the uptick about three years before that election. Whether anyone on the continent will take Australia’s call when that time comes after the “now you see me, now you don’t” Security Council dance that Australia performed, is hard to know.

Thankfully, Australian engagement with Africa never was and currently isn’t limited to the vagaries of the aid program. Over the past few years, business links, NGO/community links and people-to-people links have superseded the government’s caution and politics to build networks across the oceans. The African diaspora in Australia is strong; the Australian community is increasingly recognising the rich social, cultural and sporting linkages that can be built; and economic opportunity abounds. African aid might be drawing its last breath but the links between the two continents are only getting started.