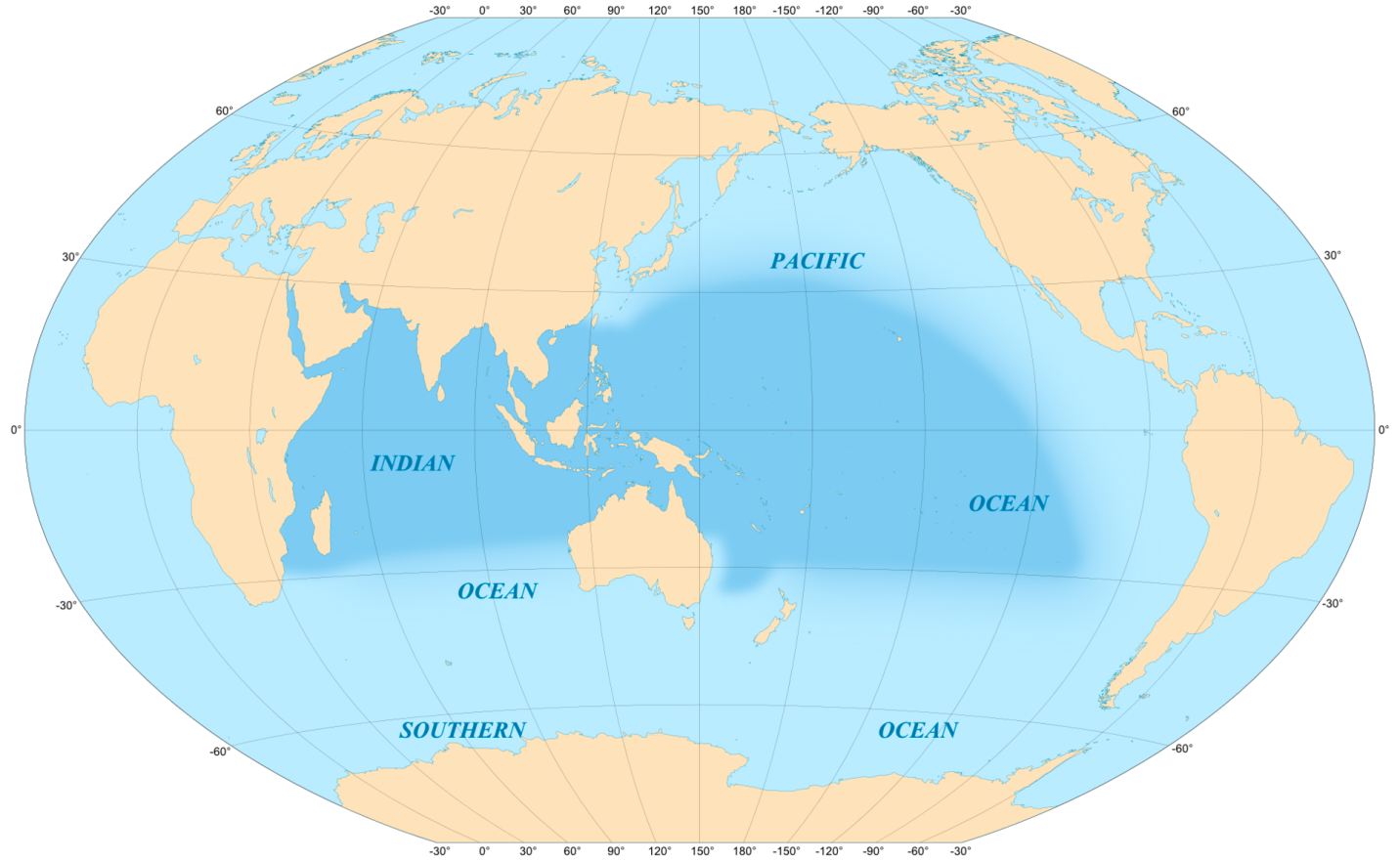 In describing the region of the world in which Australia is focused in terms of aid, the Foreign Minister has assiduously adhered to the clunky “Indian Ocean Asia-Pacific”.  In her speech to the National Press Club however, she seems to have settled on “Indo-Pacific.” This term appears throughout the documentation released by the aid program in conjunction with the new strategy. So just what is the “Indo-Pacific”?

Our friend Wikipedia defines the Indo-Pacific as “a biogeographic region of the Earth’s seas, comprising the tropical waters of the Indian Ocean, the western and central Pacific Ocean, and the seas connecting the two in the general area of Indonesia” and helpfully includes a map.

The term Indo-Pacific was endorsed in the previous government’s 2013 Defence White Paper [pdf] and has been actively used [pdf] by the Indonesian Foreign Minister.

But how does the aid program define the Indo-Pacific? This is clearly an important definition given one of the performance benchmarks for the new aid program is that 90% of bilateral aid will go to this Indo-Pacific region.

The DFAT documentation released, strangely, does not provide a map – long a favourite visual for aid programs. Without a map, it is hard to know how this region is defined. Does the aid program use the Wiki definition?

A clue to the definition of the region is provided by the assertion in a recently released performance benchmarks document that this 90% goal is already being reached in 2014-15. We can agree that the Pacific, most of East Asia (excluding Mongolia which is touched by neither the Indian or Pacific Ocean), and parts of South Asia are certainly in the Indo-Pacific. We can also agree that Latin America, the Caribbean, Iraq, Afghanistan and a few other countries are not in the Indo-Pacific. So in order to get to the 90% figure in the 2014-15 budget, we see that sub-Saharan Africa must be included in the aid program’s definition of the Indo-Pacific. 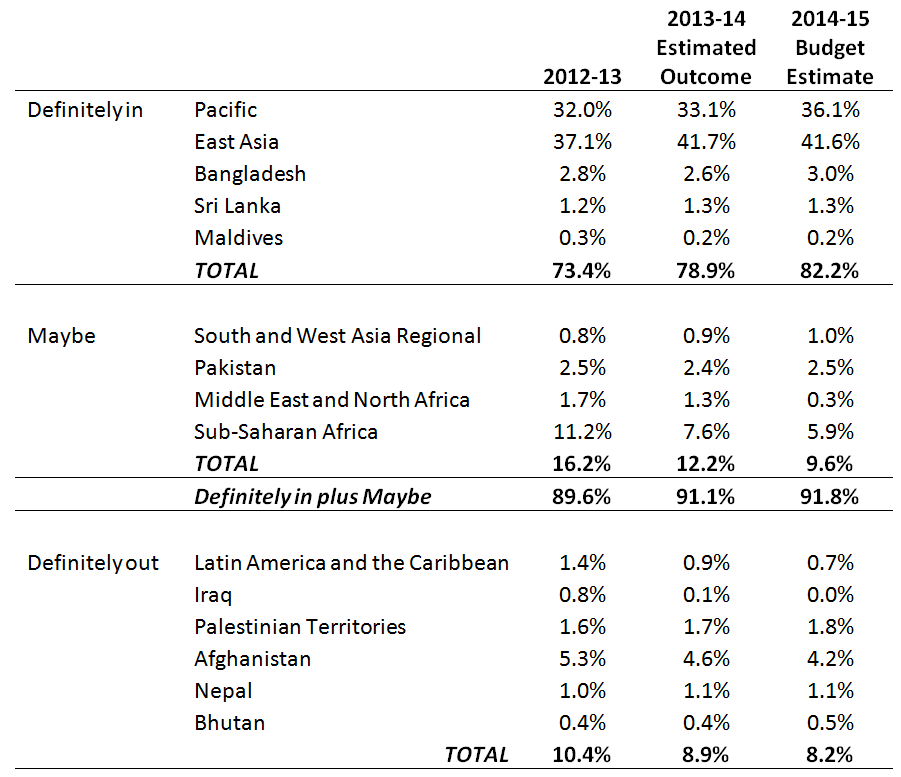 Of course, not all of sub-Saharan Africa is touched by the waves of the Indian Ocean. South Africa, Mozambique, Tanzania, and Kenya certainly are. Current recipients of Australian aid such as Zimbabwe and Ethiopia are not lapped by Indian Ocean surf and neither is West Africa of course. So to meet the 90% benchmark, the Africa program will need to be refocused on Indian Ocean countries.

The current government has been rightly critical of the previous government’s aid push across the African continent which saw aid being delivered to 40-plus African countries. The African expansion occurred not because anyone at AusAID thought that was effective but rather due to the DFAT-driven push for a Security Council seat. It also provided diplomatic cover for our miners who were piling into West and Central Africa.

But a focused African aid program targeted to our traditional partners in East and Southern Africa would be very appropriate. The Indo-Pacific strategy acknowledges that Australia is not only a Pacific nation but part of the Indian Ocean community as well. The Foreign Minister – representing Western Australia – seems to genuinely see the Indian Ocean perspective as an important part of Australia’s future as evidenced by a May speech in Perth.

The idea that Africa is too far away would not resonate with many Australians. Western Australians – the fastest growing part of the country economically and demographically – would be rightly confused by the notion of Samoa (7562km away from Perth) and Japan (7932km away) being in “our neighbourhood”, while South Africa (7860km away) is not. In terms of trade, most Australians are happy to state that Beijing (8961km away from Sydney) and Delhi (10439km from Sydney) are part of our region even though the distances are huge.

Importantly, Australia has a very positive reputation in Africa. Many Africans with whom I have worked view Europe cautiously both due to their colonial heritage and their political hypocrisy over the years. Australia does not carry such baggage (which incidentally they do in the Pacific). It is rather seen as a vibrant young country unencumbered by the past.

In the paper [pdf] that I wrote with my colleague Glenn Denning for the Independent Review of Aid Effectiveness back in 2011, we recommended that the Australian aid program adopt an African aid program focused on 4-6 countries with sufficient depth to build lasting, impactful, aid-effective partnerships around one or two key sectors (rather than the wide but shallow engagement that was adopted in the end). Returning to this proposed model in the new Indo-Pacific paradigm would acknowledge the vast development needs of East Africa, as well as the massive potential for trade and growth (noting GDP growth rates of 8.4% in Mozambique and 7.0% in Tanzania in 2013) and the current NGO engagement in the region.

If the government is serious about being a major player in aid and growth in the Indo-Pacific region, then an African aid program needs to be welcomed in from the cold and given the support it needs to contribute to Australia’s interests and reduce poverty in the region.