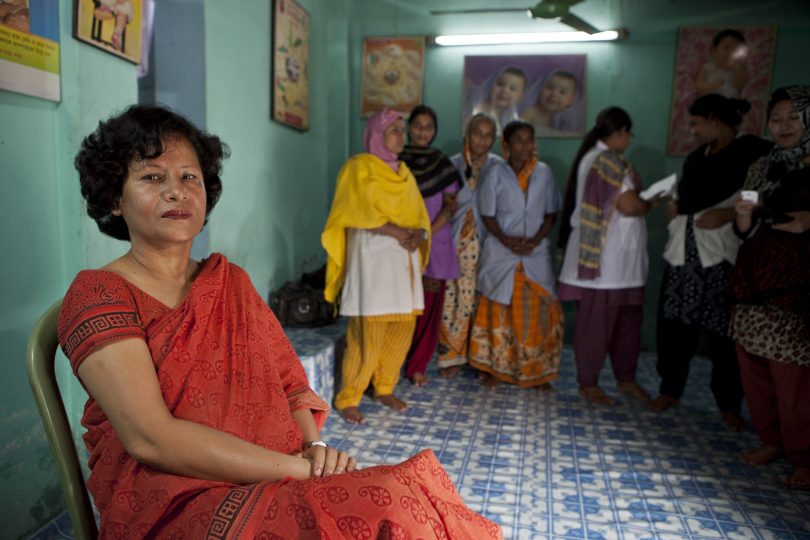 References to the ‘Indo-Pacific’ are ubiquitous in contemporary policy statements on Australia’s international relations, including when it comes to the development program. According to the government’s current aid strategy, Partnerships for recovery, “Australia will stand with our partners in the Indo-Pacific as we attempt to minimise the human, economic and social costs of this pandemic, and chart a course to economic recovery.” The Labor opposition has also embraced the concept, which stands in contrast to the bipartisan emphasis on the ‘Asia-Pacific’ throughout the 1990s and 2000s.

How has this important shift in geographic frame been reflected in Australia’s aid program and budget allocations? One of the immediate difficulties in answering this question is that there is no standard cartographic definition of what constitutes the Indo-Pacific. Indeed, according to one proponent, “the margins will shift according to the issue at hand.” Notwithstanding this flexibility, the government’s 2017 Foreign Policy White Paper does offer a useful, rule-of-thumb definition of the Indo-Pacific construct: “the region ranging from the eastern Indian Ocean to the Pacific Ocean connected by Southeast Asia, including India, North Asia and the United States.”

In terms of how Australia’s official development assistance (ODA) allocations are structured, this definition would suggest the Indo-Pacific comprises three principal regions – PNG and the Pacific; East/Southeast Asia; and South, West and Other Asia. Unsurprisingly, these three regions have, combined, consistently made up the majority of Australia’s aid over the last 20 years – accounting for 62% of total aid in 2001-02, 56% in 2006-07 (the last full year of the Howard Government), 59% in 2012-13 (the last full year of the Rudd/Gillard/Rudd Government) and an estimated 70% in 2021-22.

However, within the ‘Indo-Pacific’ category there has been some change, particularly when it comes to Australia’s aid to South, West and Other Asia. Under Labor, the share of ODA to this group of countries rose significantly, increasing from around 5% of total aid in 2006-07, to 11% by 2012-13. But in 2021-22, it is expected to fall back to around 6% of total aid, excluding flows through humanitarian and global programs. 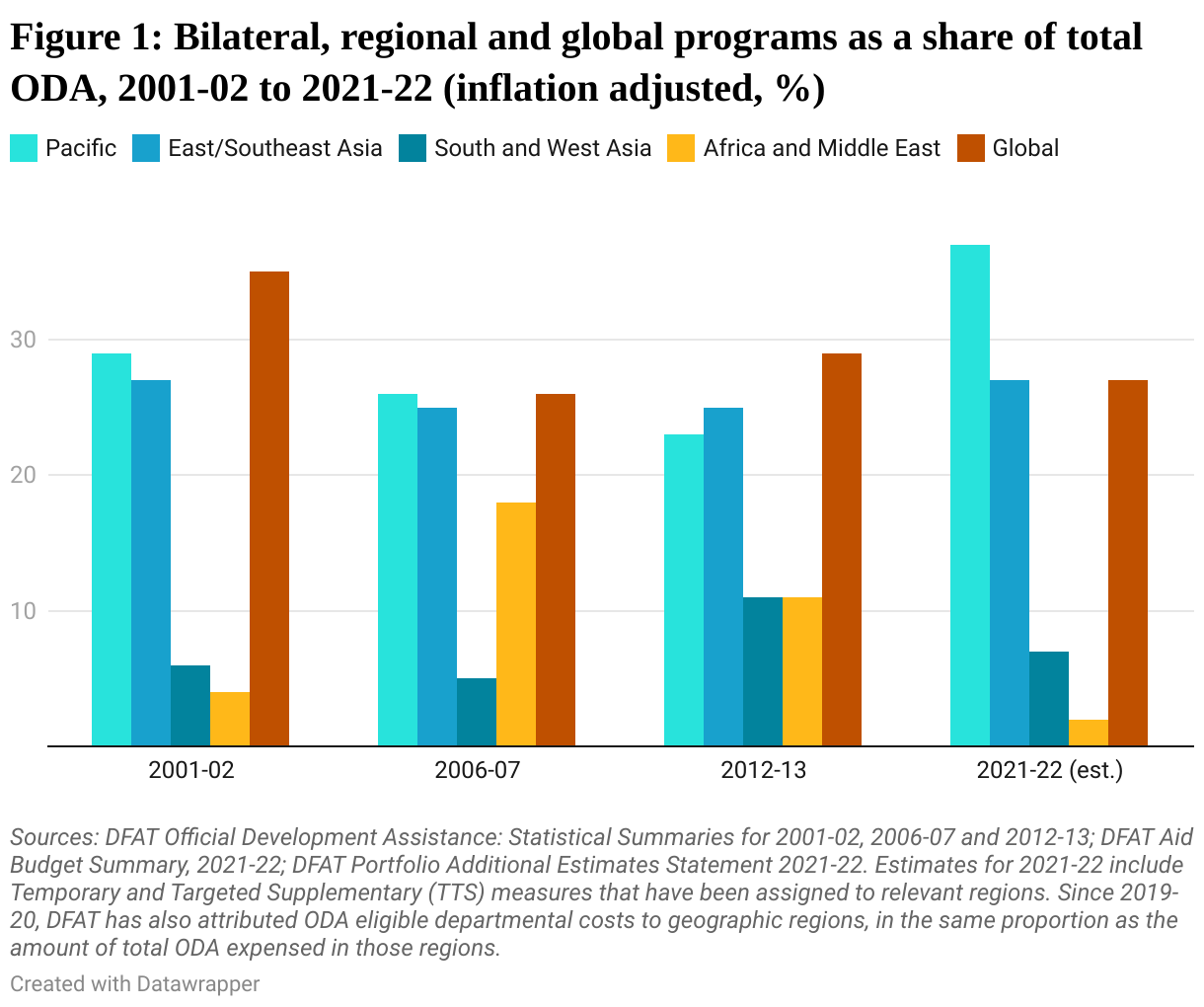 The change reflects the fact that, in the wake of successive cuts to the aid budget over much of the last decade, the large increase in the share of total aid provided to the Pacific has not just come at the expense of Africa and the Middle East and global programs. It has also, partly, come at the expense of other parts of what might reasonably be considered the ‘Indo-Pacific’, including South and West Asia. This includes significant cuts to Australia’s bilateral aid programs to Bangladesh and Sri Lanka, both of which have more than halved in real terms since 2012-13. Australia’s bilateral aid program to Pakistan was ceased 2020-21. And Australia’s assistance to Afghanistan is now, in real terms, around a quarter of what it was a decade ago. 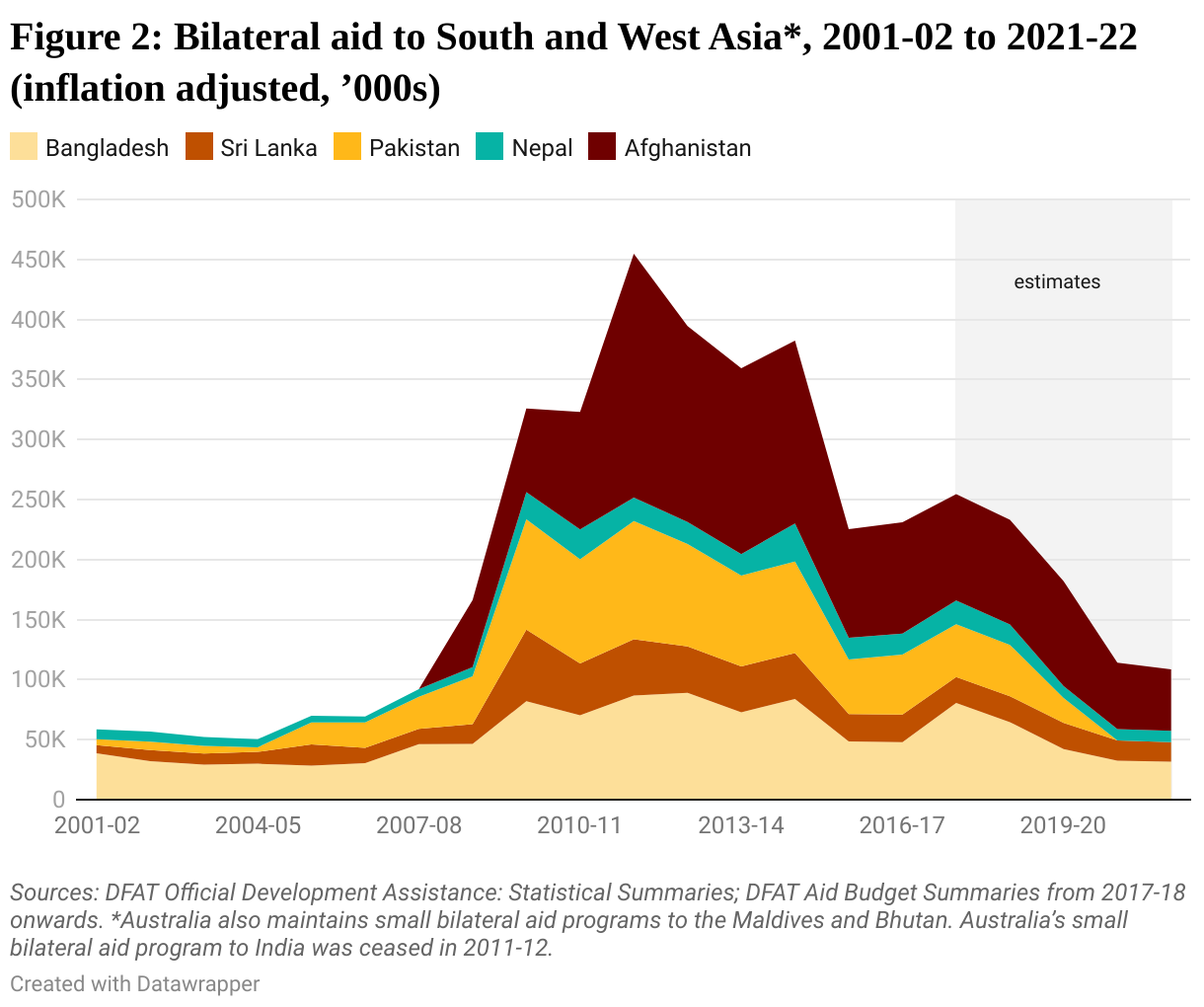 Despite high levels of poverty that have been exacerbated by COVID-19, South and West Asia has not featured in the government’s additional, “temporary and targeted” measures to assist Australia’s neighbours during the pandemic. The exception has been the small, one-off package of additional humanitarian assistance for India ($37.1 million) that was announced in the May 2021 budget. Nor has the region benefited from Australia’s commitment to share 60 million COVID-19 vaccines with the Indo-Pacific by the end of 2022, all of which have been earmarked for the Pacific and Southeast Asia. Australia’s $100 million contribution to the Quad’s (Australia, India, Japan and the US) vaccine-sharing initiative is focused on Southeast Asia.

In terms of composition, and including aid provided through regional and global programs, almost a third of Australia’s $374 million in total aid to South and West Asia reported in 2020-21 was in the form of humanitarian assistance – principally, Australia’s substantial ongoing support for the hundreds of thousands of displaced Rohingya populations in Bangladesh, and continued humanitarian assistance to Afghanistan.

In the context of a smaller overall aid budget, it is perhaps unsurprising that Australia’s development program still predominantly reflects an Asia-Pacific rather than an Indo-Pacific frame. Indeed, there are good development effectiveness arguments for concentrating Australia’s scarce aid resources on our more proximate Pacific and Southeast Asian neighbours. With the prospect of further, real reductions in total ODA under the Coalition as the temporary and targeted measures cease, and uncertainty regarding the scale of aid budget increases under Labor, ambitions for a truly ‘Indo-Pacific’ development program are likely to remain constrained, whichever party wins the upcoming election.