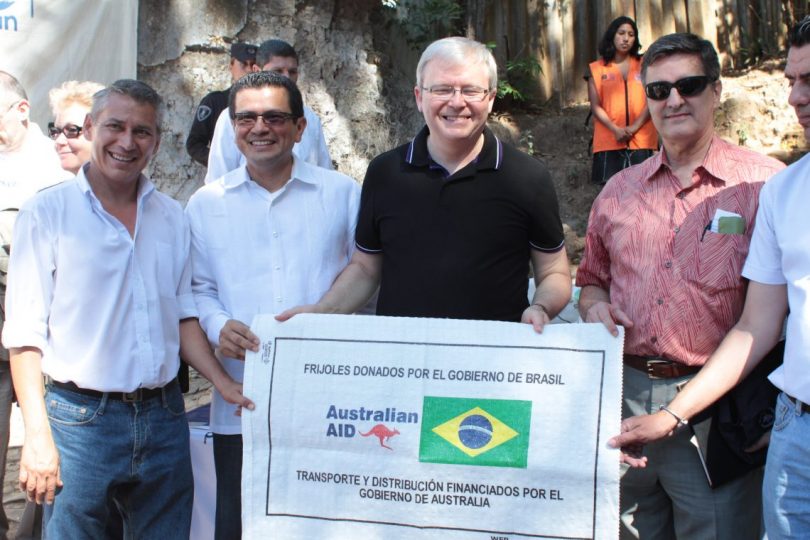 As my coauthors and I explained in our recent report on aid flows, the Australian government focuses much of its aid on just a few countries. By doing this, it’s following best practice. Australia is one of the world’s leading donors in this respect. But that’s not quite the end of the story. Although Australia focuses on a few key recipients, it sprinkles the rest of its aid far and wide. In 2018, there were 144 eligible aid recipient countries. Australia gave aid to 129 of them.

Australia’s habit of giving to so many countries raises questions. Are all donors like this? Has Australia always been like this? Most importantly, is there a risk that all those recipients are coming at a cost to aid effectiveness?

The chart below answers the first question: are all donors like this? It compares donor size with the number of countries that OECD DAC donors gave aid to in 2018. (Donor size is measured as total aid given.)

Donor size versus number of recipients 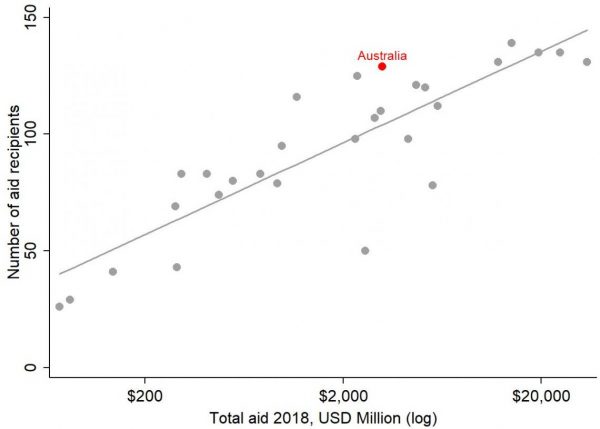 The answer to the question “was Australia always like this?” can be seen in the next chart. 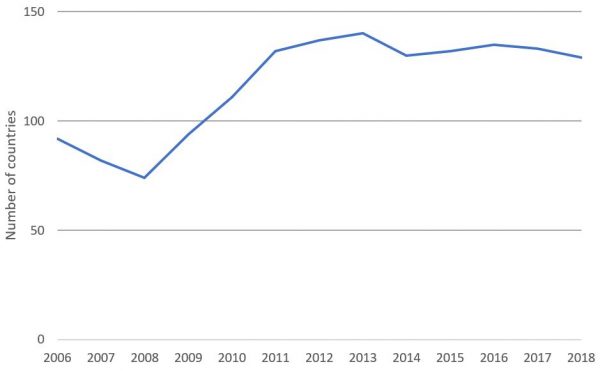 The next – and most important – question is whether giving aid to so many recipients is potentially reducing Australian aid effectiveness? The answer depends, in part, on how Australia gives its aid. If most recipients receive conventional bilateral aid, it may well be an issue. Unless aid is being given without any care for scoping, planning, processes and monitoring, each additional recipient will add to the aid program’s administrative burden. Australia’s presence may add to aid management costs for recipients too.

The next chart shows how many countries Australia gives aid to, with those that only receive aid via multilateral organisations or Civil Society Organisations (CSOs) shaded in different colours.

Number of countries over time – mode of giving 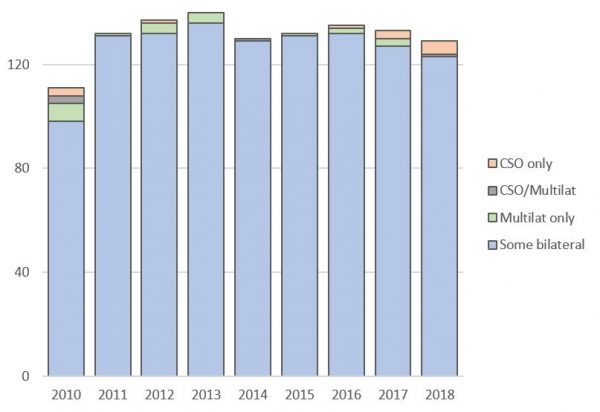 Very few countries receive Australian aid solely through multilaterals or NGOs. (Coding issues mean I’m not sure all CSOs in these data are Australian NGOs, but almost all are.)

Another possibility is scholarships. I don’t think scholarships are an ideal form of aid, yet they’re easy for donors and recipients to manage. However, in 2018 it seems that no countries received scholarships alone from Australia. (I say “seems” because identifying scholarships in OECD data is not easy.)

Another source of country proliferation suggested to me was Australia’s Direct Aid Program (DAP). The development merits of the DAP can be debated. In its favour, it gives staff in overseas posts the flexibility, with minimal admin burden, to give small grants when they see a need. However, in countries where the Australian Aid Program doesn’t have a sustained presence, there’s also a risk that lower country knowledge will lead to projects that fail, or fail to focus on real needs.

With this debate in mind, I dug into OECD data trying to distinguish DAP projects from everything else. I was aided by some tidy coding from DFAT, but my numbers won’t be perfectly accurate. You can see my findings below. 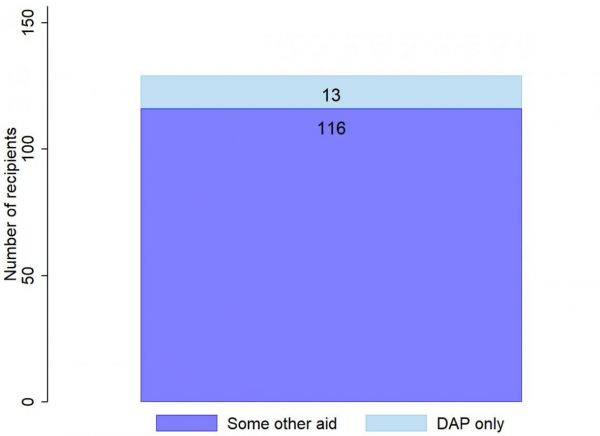 Most countries don’t receive aid through the DAP alone. Nine further countries get aid solely via a combination of the DAP and multilaterals or Australian NGOs. Thanks to challenges with scholarships, I may have missed a few countries which only got scholarships and the DAP. Even so, while the DAP clearly contributes to Australia’s high number of aid recipients, it’s not the main driver.

It’s true, most countries Australia gives aid to only get small amounts. In 2018, 88 countries got less than $2 million US from Australia. In dollar terms, the problem I’m describing does not affect the bulk of Australia’s aid. Yet the money in question is still aid. It should be used as effectively as possible to help people. And scattering aid around as much as Australia does probably reduces effectiveness.

Australia does a great job of focusing most of its aid on a few major recipients. This is important. It seems to me, however, that there’s a persuasive case – from an aid effectiveness perspective – for building on this achievement and reducing the total number of countries Australian aid is spread across.

(All numbers in this post exclude responses to humanitarian emergencies. This post is based on 2018 and earlier years because more recent data were not available when I conducted my analysis. 2019 data are now available, but changes are minimal. Data used in this post can be downloaded here.)