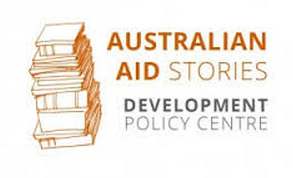 As part of a new project for 2014, the Development Policy Centre is looking for stories about Australian aid. Our aim is to put together a body of information on aid activities that have Australian links and that, according to members of our readership group, are for some reason notable. Notable because they have achieved something important at a local, national, regional or even global level, or in some cases because they have failed to do so in a way that is instructive.

We are looking for stories in which people actually involved in the development and implementation of aid activities do the talking, and in which it is explained not only what results were brought about, but also how. We know our readership group includes a lot of people who have played central roles over a long period of time in connection with specific aid activities, many of which were very considerable in terms of funding, reach or duration. Most such people have only ever been able to describe the results of their efforts in unpublished reports, owing either to confidentiality restrictions or simply the lack of any appropriate public outlet.

The Development Policy Centre has been, since 2010, a source of critical commentary on Australian aid in most of its forms. Worry not: such commentary is not about to dry up. Indeed, as noted above, stories about aid activities that missed their marks are more than welcome. However, we hope by means of this new project to add weight to the other side of the scales as well. In the process, we want to recognise some innovations and achievements that might otherwise have vanished without trace. And we want to recognise the contributions of some individuals who might likewise recede rapidly into history. The best stories often revolve around remarkable, resourceful and determined individuals.

We encourage anybody and everybody who has a notable story to tell to consider telling it now, under whatever name or description they choose (‘Anonymous’, if you like). It might concern an aid activity that in large measure achieved what it set out to achieve, or achieved something entirely unanticipated, or wreaked havoc, or merely fizzled. The key thing is that it should be a story about an experience that, in your view, mattered and deserves to be remembered.

What purpose is served by the collation of such stories? For one, a purely historical purpose. Australia’s aid program, though it just might be alive and well, undeniably reached the end of an era on 31 October 2013 when the Australian Agency for International Development was abolished a month shy of its fortieth birthday. Now is an appropriate time to catalogue such of its achievements and misadventures as can be recalled. Nobody has yet written a history of Australian aid, and it would be a mammoth task to write a comprehensive one in academic mode. We would hope at least to procure some colourful ingredients for any future such effort by means of this project.

Moreover, stories about what has and has not worked in Australian aid might conceivably influence thinking about what should be done now and in the future. They might help to cut through sterile, general debates about whether aid should target macroeconomic growth, social service delivery, private sector development or something else. It is our conviction that Australian aid has both worked and failed in all these areas, in countries both more and less poor, and we would hope to bring to light concrete examples that show how.

We also think Australia’s official and non-government aid organisations are—no offence intended—pretty terrible at telling rounded and credible aid stories. No-one wants to talk about the project that failed. And success stories tend to get hollowed out as successive revisions remove anything that might smell of imperfection or accident. There are sensitive political hides to protect, or funds to be raised. In addition, recording things done is inevitably accorded lower priority than planning for the next thing, particularly where staff turnover is high and decision-makers demand a constant flow of ‘announceables’. And, finally, there is the black-box effect: a determination to highlight results and little else leaves people unsure just how activities actually work, and thus unconvinced that they do work.

We are well aware of the potential pitfalls of this sort of exercise. The aid world has too many best-practice stories that don’t stand up to closer scrutiny. See, for example, this deconstruction of the oft-told story that empowering communities with information dramatically reduced the leakage of funds intended for schools in Uganda. As Dennis de Tray said of this story, ‘if it looks too good to be true, it probably is’.

But the way to avoid this risk is not to shun the ‘aid anecdote’. On the contrary, we need a multitude of stories rather than boxed sets of  best-practice tales. And we need them to be credible, warts-and-all stories in which evidence is adduced and problems acknowledged. Both unblemished successes and unmitigated failures are rare in aid.

We think the Development Policy Centre is the right organisation to embark on this exercise. As an independent policy research organisation, the Centre has no vested interest in the production of propaganda about Australian aid. At the same time, the Centre would not exist if its staff did not believe that aid, in considerable volumes and provided through a variety of channels, can achieve important outcomes at a range of scales.

Our approach will be the simplest possible one. We will keep the present blog post available on the Devpolicy blog’s home screen for about two months, as one of the five posts featured in the box at the top of the screen. You can use the comments field at the bottom of this post to provide an initial sketch of your story, or nominate an activity whose story deserves to be told—ideally with pointers as to how we might find out more about it. Alternatively, if you would prefer to remain entirely out of the limelight, you can send an email to devpolicy@anu.edu.au.

In all cases, once we hear from you, we will discuss with you what might be the best way of presenting your story more substantially. In some cases this might involve your writing it up, or our doing so with some help from you. In other cases it might involve your recording an audio or video interview with us. The latter method is particularly easy to manage and has the added advantage that people will literally hear you doing the talking.

Of course, some of us at the Centre know from personal experience how complex it can be to present a compelling and honest account of an aid activity. We are not, however, looking for chapter-length written contributions, but pithier accounts in whatever format works best for you. Each story, when fully developed, will need to incorporate some basic, brief information about the size, location, vintage, duration, funding source and management arrangements of the relevant activity. It will also need to convey a clear sense of the activity’s achievements, or in some cases failings, and include a discussion of how these were caused, together with evidence for any major claims made. But stories certainly needn’t be complete in every detail, nor must they conform to a template.

We would like as many stories as possible but we reserve the right to reject accounts if we have concerns with respect to quality, veracity or relevance. We will interpret the notion of an ‘Australian link’ quite broadly (for example, to include both non-government and government aid) but we are not, as a general rule, interested in projects that have started only in the last five years or so. Normally a longer time period will be required to establish real success. The overall emphasis, we expect, will be on activities in Asia and the Pacific, but we impose no geographic limitations.

If we can rustle up a reasonable number of interesting stories, we shall publish them in a series of blog posts, podcasts and/or short videos. Beyond that, our hope is to organise and polish them a bit, add some broad historical context by way of introduction, then publish the result in booklet and PDF form.

Finally, we encourage you to consider mailing any associated background documents, provided you are free to do so, to devpolicy@anu.edu.au, clearly specifying the story with which the documents are associated. We will make all such documents available on our static web site (https://devpolicy.crawford.anu.edu.au/) as the nucleus of a new collection of historical documents on Australian aid.

So please look at the empty box below and consider moving something from your medium- to long-term memory into it. Your contribution will help fill a substantial gap in Australian history. It could influence thinking about how, where and for what Australian aid might be used now and into the future. And, by no means least, it might be a ripping yarn.