Now that the budget has confirmed the aid cuts announced by the government in December, it is clear that the history of the Australian aid program can be written in three parts:

The third period cuts cancel out much of the increases of the second. The graph below shows the three different eras, with actual aid in red, and then the three trend lines for the three periods. The final blue line shows where we would have ended up if, rather than scaling up and then cutting back, we had just continued with the trend or growth rate of the first era. You can see that it is pretty close to where we are probably going to end up.

Note: The red line shows actual aid. The three “era” lines are trend lines showing the growth rate for that period. The “1st era continued” line shows what our aid volume would look like if aid had continued to grow at its average for the 1st era. Underlying data available here.

It’s a deflating finding. All the excitement first about doubling aid under Howard, then about reaching 0.5% of GNI, first adopted by Rudd, then supported as a bipartisan consensus. All gone.

It was not all for nothing. That triangle in the boom-and-bust years is worth about $16 billion: that’s a lot of assistance. And the additional resources and exuberance transformed the Australian aid and development sector, giving rise to the creation and growth of a number of institutions, including, to give one small example, our own Development Policy Centre. The questions now are which of these innovations and expansions will last, and which will be lost in the shake-out.

Another question is why we were as a nation unable to sustain our increased generosity. Is it a measure of our pragmatism or of our stinginess? Or is it just that we are a relatively low taxed economy, and so cannot afford a large aid program?

Whatever, the reason, it is certainly a case of Australian exceptionalism. The West as a whole has been able to sustain a large increase in aid since the early 2000s. But not us. 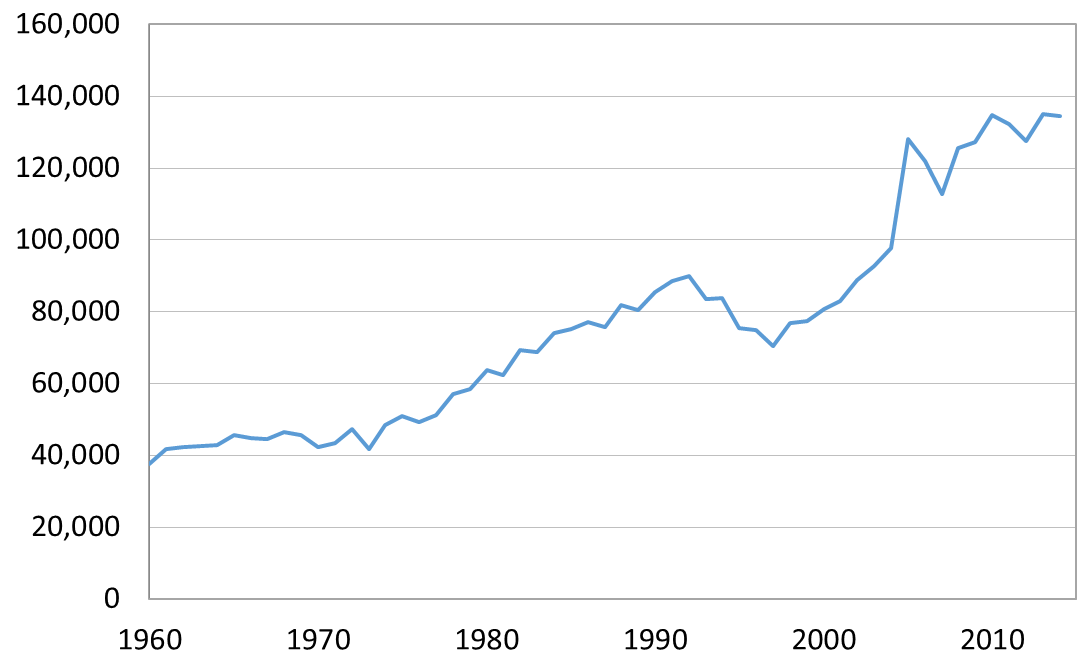 With three rounds of cuts inflicted on aid in the last 18 months, it would be foolish to rule out a fourth in the next year or two. But it is also possible that the political realities have by now reasserted themselves over the aid budget, and that, following this recent and jarring adjustment, we will be back to a situation in which our aid spending once again tends to fall as a percentage of the budget and the economy, but at least keeps pace with inflation, or perhaps, after a few years, does slightly better.

Would Labor, if elected, resurrect the scale-up? In the discussion following her speech to the 2015 Australasian Aid Conference, Shadow Foreign Minister Tanya Plibersek noted that aid would have to take its place in the queue, behind important domestic spending priorities such as health and education. So I’m not holding my breath on that one, though of course it should be an important campaigning objective.

In sum, in the coming years aid might lie above or below an extrapolation of old trends. In my view, however, the most likely scenario for aid  –  the new normal –  is a return to the way we were. It’s hardly impressive, and it is certainly not fair, but it could be worse.