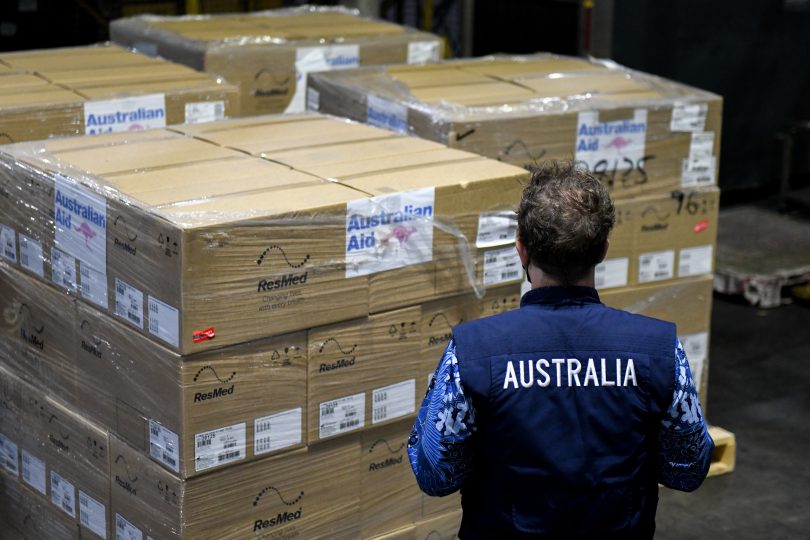 Less than 1% of Australian government spending is devoted to aid. Aid’s effects are felt in other countries, and its impacts are rarely directly noticeable to Australians. Australians have views about foreign aid nonetheless. At times, aid receives a surprising amount of public attention.

Despite this, systematic study of Australians’ attitudes to aid has been scarce. Nearly a decade ago now the Development Policy Centre set out to change this.

In a recently released discussion paper I have summarised what we have learnt. Here are some of the key findings.

I start the paper by examining whether public opinion about aid really matters. Although the Australian public has views about aid, it’s always possible that politicians and other decision-makers simply ignore them. Public opinion clearly isn’t the sole determinant of high-level decisions about aid. Politicians’ own beliefs, for example, also matter, as the contrasting fortunes of aid under Kevin Rudd and Tony Abbott demonstrated.

In the paper I outline both quantitative and qualitative evidence from Australia that points to public opinion playing a role in influencing high-level decisions about aid. The quantitative evidence comes from a 2017 advocacy campaign. In the campaign, aid advocates tried to meet all of the MPs and senators in Australia’s parliament, and persuade them of the benefits of aid. I gathered data from this exercise and analysed it. The results show that MPs from electorates where surveyed public support for aid was higher were more likely to meet with advocates, and more supportive in meetings. 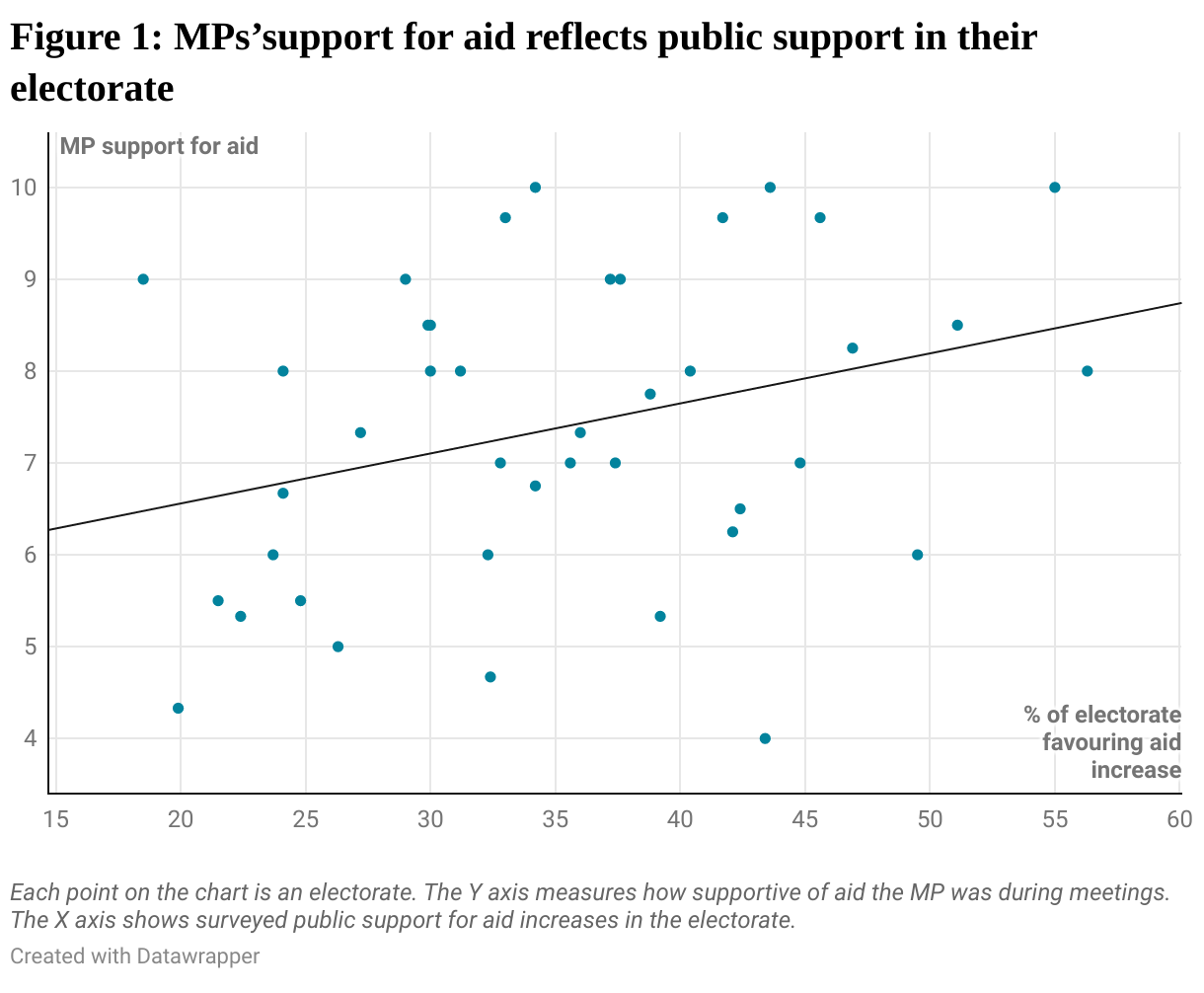 The relationships between public support, MP willingness to meet, and MP supportiveness aren’t perfect, but they are clear and statistically significant. Of course, simple bivariate correlation doesn’t conclusively demonstrate that public opinion influences MPs’ attitudes to aid. However, in the paper I show the relationship mostly continues to exist when sensible control variables are included.

Even then, the relationships are still only correlations, not conclusive evidence of cause and effect. But qualitative evidence that politicians consider public attitudes also exists. The best can be found in excellent research conducted by Benjamin Day and Tamas Wells. In 2020, Day and Wells interviewed Australian politicians about aid. They described what they heard as follows: “Fear of public backlash [against increasing aid] from the Australian public featured prominently in all interviews often as the first response to an open question about the pandemic and Australian aid.”

Public opinion isn’t the sole determinant of major decisions about aid, but decision-makers do pay heed to it. 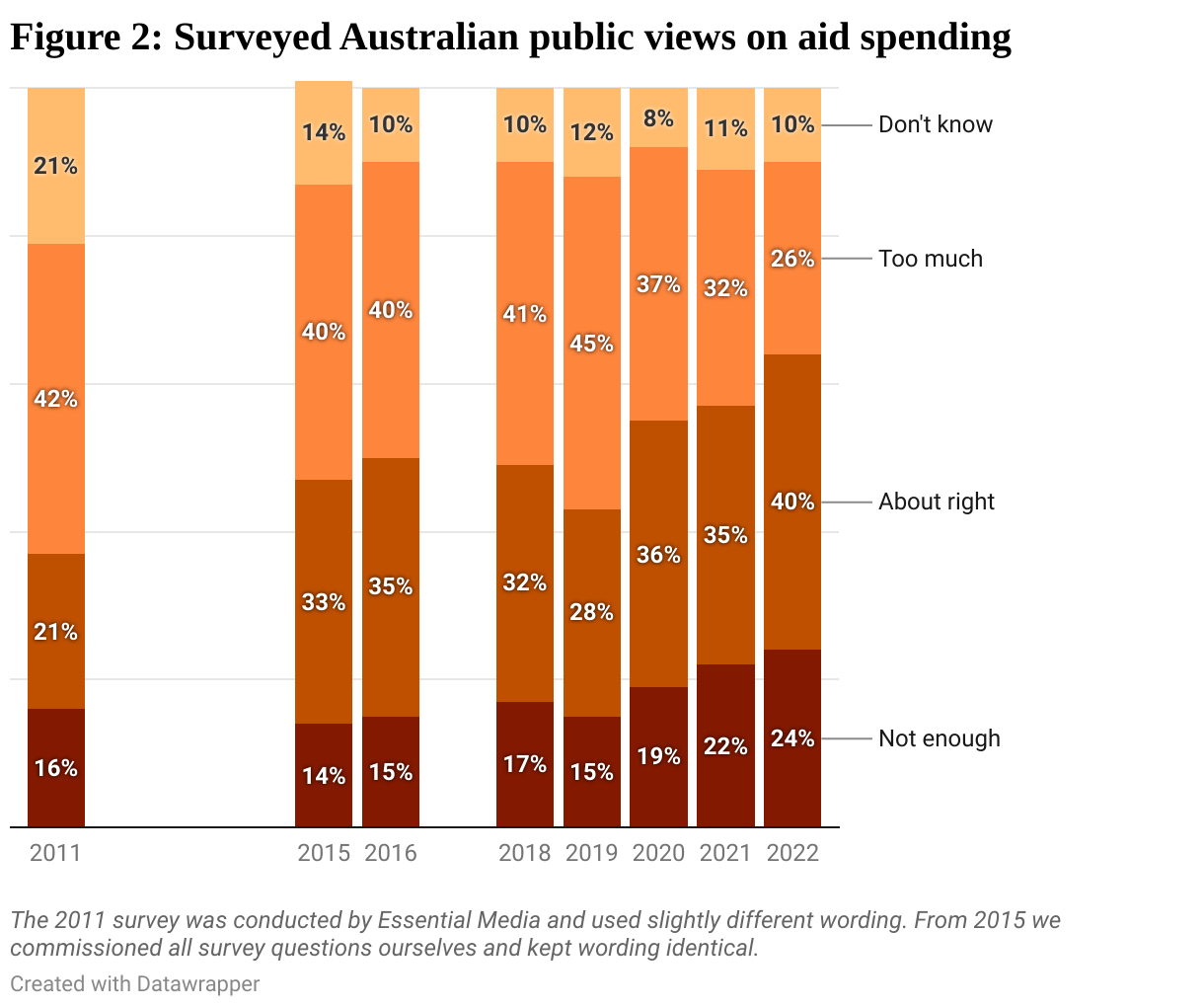 In the paper I look at why attitudes have changed in recent years, concluding that the main reason for the change is probably COVID-19.

One reason is timing. COVID-19 was the most obvious global change between 2019 and 2020 when attitudes to aid first started to shift. And when I looked at Google Trends data, the most plausible alternative explanation – China’s presence in the Pacific – didn’t fit. China’s role in the Pacific was a story prior to the increase in public support for aid, and it only became a major story in Australia after support for aid had started to rise.

Another reason for thinking COVID-19 is the main driver of more positive attitudes to aid is the results of survey experiments that I summarise in the paper. In one experiment we told a treatment group about a large Australian aid-funded initiative focused on tackling infectious diseases. This led to a substantial increase in support for aid compared to people who weren’t told about the initiative. The experiment took place before COVID-19 and was based on the Indo-Pacific Centre for Health Security. But it still shows how getting people thinking about global health issues can increase support for aid. Also, in the paper I discuss two other survey experiments we ran, focused specifically on COVID-19, which found that discussion of COVID-19 led to a fall in the belief that Australia gives too much aid.

There’s a lot more in the paper, including other topics such as what Australians think the purpose of aid should be. It’s all written for a non-technical audience, but also contains full details on methods and findings for interested social scientists.

If you want a simple take-home point from our eight years of work, it’s as follows. Public opinion matters. It influences high-level policy decisions about aid. For a long time many Australians had fairly hostile attitudes to aid. However, attitudes can change. Indeed, in recent years attitudes have changed. Probably because of the pandemic, hostility to aid has been falling.