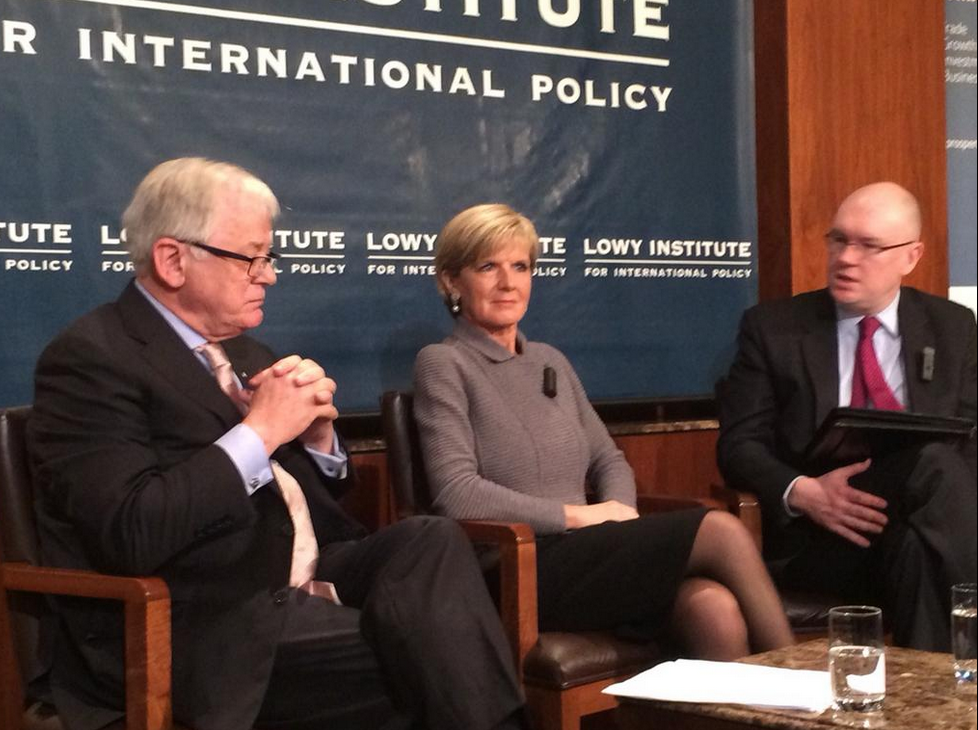 Australia’s economic diplomacy provides an overarching narrative for the government’s foreign, trade and aid policies and approaches. By promoting the four pillars of international trade, economic growth, investment and the interests of the private sector, the government anticipates greater prosperity for Australia and the world.

The economic diplomacy policy articulates an appealing vision of Australia effectively leveraging resources and know-how through these four pillars for mutual benefit within our region and beyond. There is nothing to disagree with in the aspirations in the policy document. It is useful to see the Australian Government’s efforts in international affairs given this coherence, particularly in the year Australia chairs the G20 and has a seat of the UN Security Council.

The government’s shift in aid policy suggests an impatience for the world to move ‘beyond aid’. The MDGs were successful in creating significant impetus to reduce poverty. But as the time frame for the MDGs draws to a close and the world comes to grips with the huge shifts in economic power that have taken place over the last two decades, there is a strong sense that we need a different agenda.

It is an unfortunate fact that it is too early to declare victory against poverty. Estimates suggest that some 1 billion people will still live in extreme poverty in 2015 and around 2.4 billion people on less than US $2 a day, the average poverty line in developing countries and another common measurement of deep deprivation.

While Official Development Assistance remains a powerful tool for combating poverty, the idea that a broad range of rich-country policies impact on poverty is not new. The 2002 Monterrey Consensus recognised the important impact the international monetary, financial and trading systems all have on poverty. The Center for Global Development has, for over a decade, published a “Commitment to Development Index” which ranks all OECD countries on aid, trade, investment and financial transparency, migration, environment and promotion of international security, acknowledging that wealthy countries’ policies across all these areas impact on development and that aid alone will not overcome poverty.

It is generally accepted that in the long run, open economies fare better in aggregate and this is beneficial for development. However, welfare gains can be unevenly distributed, meaning that some segments of society may be left behind. In addition, in the short run, openness can harm some actors in the economy, and the poorest are most vulnerable (see for example Santos-Paulino, 2012 [pdf]).

A recent World Bank Policy Research Working Paper (Le Goff and Singh, 2013 [pdf]) reviews the empirical evidence for the impact of trade on poverty across 30 African countries between 1981 and 2010. This paper suggests that trade does tend to reduce poverty, but only where financial sectors are deep, education levels are high and governance strong. The benefits of a more open trade regime do not automatically accrue across societies and for beneficial impacts on poverty other policies and investments are necessary, such as governance, health and education.

Likewise, it is generally acknowledged that economic growth is necessary for developing countries to reduce poverty. However, the same rate of economic growth can have very different impacts on poverty under different conditions. The key challenge for those committing to poverty reduction is to promote policies that stimulate growth while also adopting policies and programs that enable the poor to participate in the benefits flowing from that growth. For example, in Papua New Guinea, indicators of poverty such as access to clean water have changed little over a decade of strong economic growth and PNG does not appear to be on track to meet any of the Millennium Development Goals.

For economic growth to reduce poverty, there must also be a strong focus on environmental sustainability – something this document is silent on. Our region is highly vulnerable to climate change and natural disasters. According to the UN, natural disasters have affected 4.4 billion people and caused $US 2 trillion in economic losses over the past two decades. The economic cost of disasters is only likely to increase, with a growing share of the world’s population and economic activity concentrated in disaster prone places.

Foreign direct investment dwarfs aid flows and has the potential to play a far greater role in reducing poverty. However, in many developing countries where property rights are poorly defined and implemented, major investments in infrastructure, agriculture or mining can lead to displacement of local populations without appropriate compensation, worsening poverty. Organisations like the World Bank and Asian Development Bank have adopted strong policies around displacement and resettlement to ensure activities they fund do not adversely affect local populations.

But these policies are not always followed. A project to rehabilitate Cambodia’s railways, jointly funded by Australian aid and the ADB, was found (by the ADB’s Compliance Review Panel) to have led to impoverishment of resettled people. The recent case of the ANZ Bank’s funding of a sugar plantation in Cambodia was another example of an Australian investment having awful consequences for poor people.

Illicit financial flows out of developing countries in many cases outweigh flows from FDI and aid. According to Transparency International, over the last decade developing countries have lost around US$5.9 trillion in illicit outflows.  Measures to address money laundering, tax evasion, bribery and base erosion are critical if international investment is to stimulate lasting and inclusive economic growth and poverty reduction.

Does the private sector reduce poverty?

The growth of labour intensive industries in Asia has increased prosperity for millions who have been able to leave rural areas with few prospects and become a first generation of wage earners. However, CARE’s work with young women in urban areas across the Mekong has highlighted some of the vulnerabilities they face. Contracts are often short term, labour laws are lax or not implemented and there may be little attention to occupational health and safety. Unfortunately there are fairly regular exposes in the media about Australian goods being manufactured using child labour or other abusive practices.

The vast majority of the world’s poor operate within the informal sector and much more could be done to help reduce the costs of doing business for small and micro entrepreneurs and promote formalisation as driver of poverty reduction. In fact, micro, small and medium enterprises are fundamental drivers of economic growth, innovation and economic resilience in developing countries, accounting for between 70% and 95% of employment.

The new economic diplomacy approach calls for aid, trade and foreign policy to work together to drive positive outcomes for Australia and the world. From the perspective of aid and development, there are some things I would like to see more clearly articulated:

Australia stands to benefit from having prosperous and resilient neighbours that we can trade with, invest with and do business with. Ensuring real development outcomes and reductions in poverty from the economic diplomacy agenda should be the measure of its success.

Julia Newton-Howes is CEO of CARE Australia. This post is based on her remarks at the launch of the ‘Australian Government’s Economic Diplomacy Agenda‘ at the Lowy Institute on August 18.