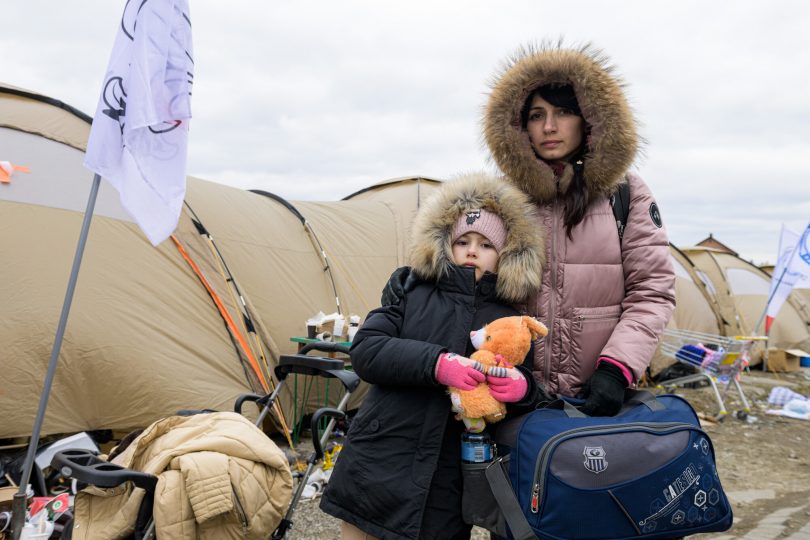 A mother and daughter, from central Ukraine, at the Polish border on 8 March 2022 (©Anthony Upton/DEC)

Innovation in the aid and development sector is often found at the agency level but rarely is transformative across the sector. The recently created Emergency Action Alliance (EAA) represents an important exception, bringing together 15 of many of the best-known Australian NGOs in a creative collaboration that will increase humanitarian reach and impact during large-scale global crises.

The Australian NGO sector has for decades attempted to create a joint mechanism that could be activated under one fundraising ‘umbrella’ to respond to humanitarian crises. The 60-year old Disasters Emergency Committee (DEC) in the UK is the best known global example of this model. Around the world there are now 10 similar disaster alliances. In 2021, Australia became the 11th nation to establish a joint funding mechanism with the launch of the EAA.

The foundation for the EAA was set in 2018 when a collection of ACFID CEOs gathered to reinvigorate previous work to explore this innovation. All ACFID members were invited to participate in developing a pilot: 17 agencies stepped forward to participate in the development of the model and provide seed funding.

There were several drivers for this important reform. These included a more challenging fundraising environment with decreasing returns on investment, and declining numbers of donors and total donations. Another driver for the change was the forecast increase in humanitarian crises in the coming years, due in large part to the impacts of climate-related disasters. Finally, localisation trends and recent host government responses to disasters in places like Indonesia revealed a shift towards only allowing NGOs with pre-existing local presence to participate in disaster response. This shift necessitates a joint approach to ensure the best-placed EAA members can respond.

Central to EAA’s success is the principle that shared agency objectives are more important than individual agency brands. In other words, there was a view that success would be achieved if the EAA as a whole could raise more money and get it to the communities in crisis through the best-placed agency to deliver programming. Collaboration, not competition, in times when the needs are greatest is the best way to maximise positive humanitarian impact.

There are many reasons why people don’t give to international emergencies. Uncertainty about where the money goes and confusion about which charity to support lead to hesitation. Many Australians feel overwhelmed in the face of the scale, complexity and multifaceted nature of large scale disasters. The EAA aims to address these barriers by creating an easy way to give – through one coordinated appeal.

Early in the EAA development process it was agreed that government, media and ACFID support were essential elements for success. Leaders in DFAT had been supportive of the initiative from the outset, helped provide seed funding alongside member investment and have confirmed that EAA will be a key partner in Australia’s humanitarian response efforts. The Foreign Minister, Marise Payne, underlined government support for the initiative by formally launching the EAA. The ABC and SBS signed partnership MOUs – helping ensure appeal messages are widely communicated. ACFID has also played a valuable role – collaborating to ensure EAA systems align with the ACFID Code and providing strategic insights and advice throughout the startup phase.

The EAA was created with an expectation that – like the DEC model – it would become operational rarely (maybe once or twice per year) when the scale and complexity of a crisis merited the joint appeal approach. The Ukrainian crisis has become the first formal appeal launch for the EAA and, as at 15 April, the EAA had raised more than $3.5 million.

While the huge needs in Ukraine may seem like an obvious impetus for a joint appeal launch, the reality is that our first appeal has not happened in line with our ‘play book’. We had expected our first launch would be linked to a sudden onset emergency (like a major earthquake or tsunami) and thus most of our protocols and simulations had been built around those scenarios. A devastating war and a humanitarian crises involving one of the fastest growing internal displacement and refugee movements since since World War II has required us to make adjustments in real time and have been a credit to our agile structure.

We also had not envisioned simultaneous domestic crises. The timing of the Queensland and NSW floods overlapped with the start of the war and made efforts to secure media and government attention more difficult due to the huge local needs in our own back yard. This situation delayed the ability for the EAA to launch as quickly as it had initially envisioned.

In addition, the EAA had the unexpected challenge that one of our large founding partners, World Vision Australia, announced at the start of the Ukrainian crisis their withdrawal from the EAA without notice or consultation. This created additional work and complexity for a small, already stretched, secretariat in the midst of the first EAA launch. This diverted resources away from the humanitarian response.

We expected a start-up innovation like the EAA was going to face significant challenges and a steep learning curve as it went to market for the first time. However, the slower than expected ‘rolling start’ has actually allowed us to refine systems, apply lessons in real time, and negotiate adjustments with key stakeholders. As a result, in addition to the positive public response, we have secured $2 million in support from DFAT, strong ABC support, and better than expected corporate support.

The EAA members have been heartened by the funds that have been raised to this point by what is an unknown new agency which is yet to secure wide brand recognition. Despite the challenges and the steep learning curve, this first launch has reinforced the strong case for the EAA.

Looking to the future, the EAA will benefit from our strong relationships with the 10 other nations which have similar joint fundraising mechanisms and the opportunity to leverage these relationships. This includes new partnerships with large multi-national digital platforms that will expand our reach globally and in Australia.

The EAA is truly our sector at its best – being both innovative and collaborative under a common vision. The EAA will continue to build on the understanding that we are better together – and that by working collectively under a unified brand we can achieve our individual mission statements in new, better and bigger ways.

Matthew Maury is the CEO of Tearfund Australia, Chair of EAA, Deputy President of the ACFID Board and a Board Member of the Integral Alliance (a global disaster response network of Christian agencies).