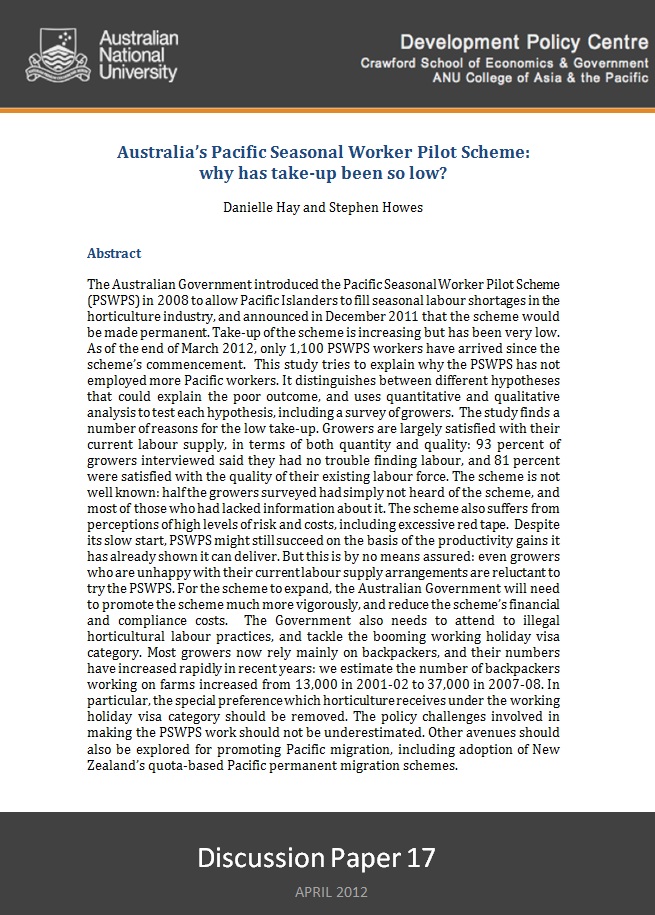 The Australian Government introduced the Pacific Seasonal Worker Pilot Scheme (PSWPS) in 2008 to allow Pacific Islanders to work in Australia as fruit and vegetable-pickers for periods of up to six months.  Take-up of the scheme has been low; as of the end of March 2012, only 1,100 PSWPS workers have arrived since the scheme’s commencement.  This is well below the cap of 2,500 put in place for the Pilot’s duration which runs up to June 2012. It is far below the 7,000 Pacific workers New Zealand attracts every year through its Pacific seasonal worker program, and it is miniscule compared to the estimated 37,000 backpackers who work on Australian farms every year.

The Australian Government announced in December of last year that the PSWPS will become permanent, and changed its name to the simpler Seasonal Worker Program (SWP). Will SWP grow into something much bigger, or will it stay a tiny program? It’s an important question. Both the Australian and NZ seasonal worker schemes have been intensively evaluated. There is no doubt that the PSWPS is a great scheme per participating worker, but if the number of workers stays small, so will its total impact.

The study on the PSWPS which we have just released is the first comprehensive attempt to try to understand why the PSWPS has not taken off. The scheme is demand-driven: if employers don’t want to use Pacific workers, they won’t. So we went out and asked 183 growers (by phone) half way through last year if they had heard of the scheme, if they were using it, whether they would consider using it, and why or why not.

The first very simple finding is that the scheme is not well known. Half the growers surveyed had simply not heard of the PSWPS, and half of those who had said they lacked information about it.

But unfortunately the answer is not simply more publicity. Only 2% of our growers who had heard of the scheme were using it, and only another 2% were thinking of using it. Most (about 70%) said that they just had no need for it. The rest were worried about risks with the scheme and with costs.

No need for the scheme? In fact, according to our survey, only 7% of growers said they had difficulty finding sufficient seasonal workers. What about those claims made at the time of the scheme’s introduction, and still being made today, that Australian horticulture is short of 22,000 workers? And those headlines about Australia’s “ag-labour crisis”? Most growers (73% according to our survey) now rely mainly on backpackers, and the number of backpackers working in agriculture has exploded over time, from, we estimate, about 13,000 in 2001-02 to 37,000 in 2007-08. This seems to have largely solved the horticultural labour shortage problem.

There’s a bit of interesting history to all this. In the mid-2000s, the Howard government was coming under a lot of pressure to deal with labour shortages in relation to horticulture, but didn’t want to start up a Pacific seasonal worker program. So it relaxed the backpacker visa conditions in relation to agriculture, and said that, if you worked for 3 months in your first year on a farm, you could get a visa for a second year. Since then, the number of backpackers visiting Australia has soared, and many more are working on farms. In 2010, some 25,000 backpackers applied for a second-year visa on the basis of agricultural work.

It’s not that there is no hope for the PSWPS. Most of the growers who have used it like it, the numbers participating are growing, and some 19% of growers we surveyed said they were unhappy not necessarily with the quantity but the quality of the workers they currently employed – the backpackers who are up and  off to the next city or party. These are the growers the PSWPS should appeal to: Pacific seasonal workers are a lot more reliable and productive than backpackers.

But even among this group of growers, the picture isn’t too rosy, with half of them saying that the PSWPS is either too risky or too expensive to use. More generally, only just over a quarter of the growers surveyed who had heard of the PSWPS thought that it had a good reputation – the rest either didn’t know enough to say (about a half), or thought it had a poor reputation (another quarter). Participating growers complained about compliance costs – it has been a highly regulated scheme to date.

It is good that the Government hasn’t given up on the PSWPS but reforms will be needed to help it expand. In the paper we suggest five.

First, a lot more publicity is needed to reach the 75% of the growers who either hadn’t heard of the scheme mid-way through last year or didn’t know enough to reach a judgment on it.

Second, compliance costs are too high, and the scheme needs to be streamlined and its red tape reduced. For example, to engage Pacific workers, growers must first demonstrate that they can’t fill the jobs using Australian labour. Yet every grower we surveyed uses foreign labour. Pacific workers are competing with other foreign workers, not Australians. The labour market tests and other onerous compliance requirements, including monthly reporting, should be dropped.

Third, the financial costs of the scheme to growers could also be reduced. The very strong Australian dollar has made the scheme even more profitable for Pacific workers. Perhaps they could be made to bear more of their international travel costs than the roughly 50% they currently cover.

Fourth, if the Government is serious about the Seasonal Worker Program, then at some point the incentive currently provided for backpackers to work on farms by offering them a second year in Australia in return needs to be removed.

Fifth, there needs to be a crackdown on illegal labour. This is obviously a sensitive subject, but only 12% of the growers we surveyed were prepared to say that there was no use of illegal labour in the horticultural sector. The routing out of illegal labour arrangements – not only employment of illegal migrants, but the use of cash payments – is said to have been an important part of the success of the NZ scheme.

These reforms won’t be politically easy. The troubles faced by the PSWPS scheme have a broader lesson as well. Seasonal labour schemes  are prescriptive by nature. The government has to step in and put in place all sorts of conditions and regulations around any such program. Picking winners is always a risky policy path, as the PSWPS experience itself shows.

An alternative or complementary strategy would be to approach the twin goals of alleviating our labour shortages and increasing migration from the Pacific more directly, by creating a Pacific window in our permanent migration regime. This is something NZ has long had (through a system of visa lotteries for the Pacific), but which has never been considered seriously here. Yet think of aged care. You don’t find many backpackers in aged care, and you wouldn’t want to. It’s not a job for seasonal labour, but it could be an occupation for Pacific islander migrants.

Fixing the PSWPS is important. But it is only part of the story. Australia has shortages in low-skill labour and the Pacific needs more opportunities for labour mobility. As the World Bank has recently advised us, we need to reduce barriers to both short-term and permanent migration from the Pacific region.

Stephen Howes is the Director of the Development Policy Centre. Danielle Hay is a Research Associate at the Centre. Other papers and presentations discussed at the Making Pacific Migration Work conference will be made available shortly. This blog is a part of a series on the Pacific Seasonal Worker Program. Other blogs in the series can be found here.