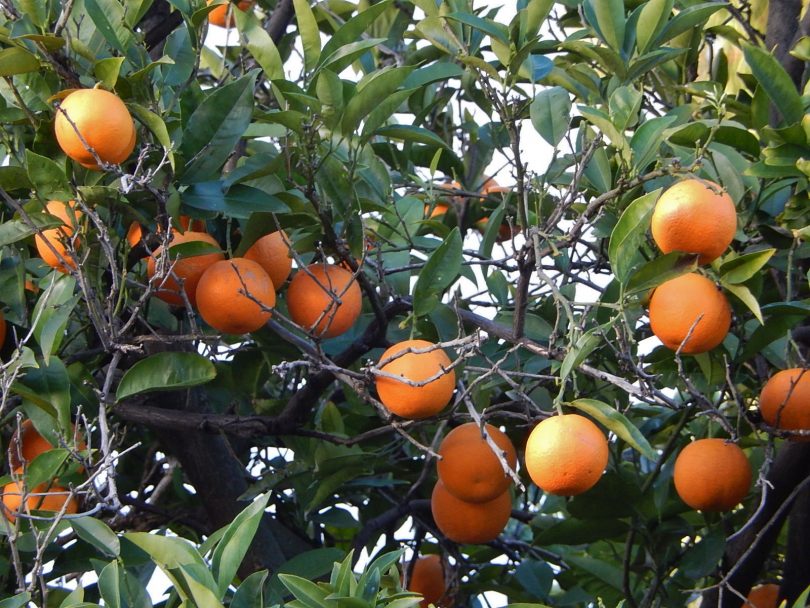 In my previous post, I argued that the far-reaching reforms to the backpacker visa announced at the start of November effectively amount to the introduction of an agricultural visa. In this post, I examine the implications for the Seasonal Worker Program (SWP) targeted at the Pacific, which, according to the Prime Minister, is meant to be our first priority for sourcing horticultural labour.

The government is projecting that recent growth in the SWP will continue. Clearly the scheme has momentum, with 40% growth per annum in recent years. We know there are a large number of employers waiting approval. But for how long will the growth continue? Simply projecting forward recent experience doesn’t do justice to the sweeping nature of the new backpacker reform package.

Some reforms to the SWP to make it more attractive were also announced, but these are tweaks by comparison  (an increase in the maximum stay from six to nine months, and a reduction in the employer contribution to plane fares from $500 to $300). Last year seasonal workers provided about 4,200 years of farm labour in Australia. That is less than half of the years worked on farms by backpackers to get a second visa, estimated in the previous post at 8,750. Will that 4,200 or even more still be needed if another 8,750 backpacker years are mobilised as a result of the new reforms, as was projected in the previous post?

By far the majority of workers recruited under the SWP have been employed by labour hire companies. What is to stop these labour hire companies from recruiting from Taiwan instead of Tonga, or Korea instead of Kiribati? Hiring backpackers is a much cheaper and easier proposition than hiring seasonal workers. The table below summarises the differences in employer responsibilities. (In addition, unions are notified whenever a seasonal worker arrives in Australia; this is of course not the case for backpackers.) 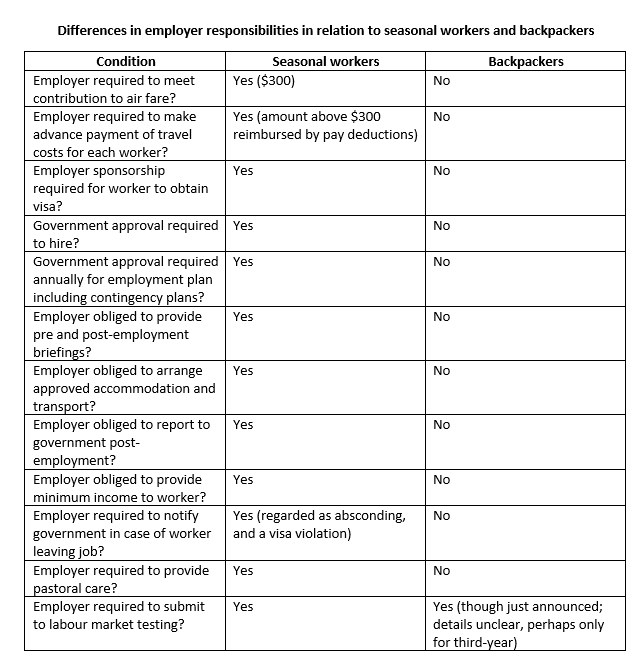 Why would anyone hire a seasonal worker? Clearly some do. The compensating attraction of seasonal workers is that they are more reliable as a source of labour and, over time, with return visits, become more productive. But now, with the reforms, backpackers will become more like seasonal workers, but without the associated hassle and expense. Increasingly, backpackers will come to Australia wanting to work in agriculture. Within their first year, they will become trained, and while it is true that, unlike seasonal workers, they won’t be able to return in subsequent years to the same employer, thousands of experienced second- and third-year agricultural backpackers will be available for hire. Even if they don’t want the full three years in agriculture, at a minimum, thousands will be willing to work for three months at a stretch in their first year to get their first visa extension, and six months in their second, to get their second extension, thereby becoming more dependable as a source of labour.

One thing that will continue to protect the SWP is the assurance farmers have that if they use it they will not be involved in illegal practices, because it is so highly regulated. The preference to use a regulated scheme (whether to avoid exploitation, government action, or bad publicity) has clearly been growing over time, and has been driving SWP growth. Interestingly, Woolworths has laid down a rule that farmers supplying to it can only use labour hire companies registered under the SWP. But labour hire companies and employers can find other ways to assure themselves they are avoiding exploitation. Increasingly, Australia’s states are introducing licensing for labour-hire companies. As labour-hire companies become more reputable, expect this comparative advantage of the SWP to fall away. Labour hire companies might register under the SWP, but that doesn’t mean they will only hire under the SWP.

So will employers turn from Tonga to Taiwan? It’s too early to say. Some employers are very committed to the SWP. And the scheme does have momentum. At a minimum, however, you would have to say that the backpacker reforms are a major risk to the SWP. Even if employers don’t abandon Tonga, why would they go to Pacific countries eligible for the SWP but yet to send large numbers? Taiwan and Korea are certainly going to look a lot more attractive than PNG and Solomon Islands.

In my final post, I will provide an overall assessment of the reform package.

Read part one of this series here and part three here.