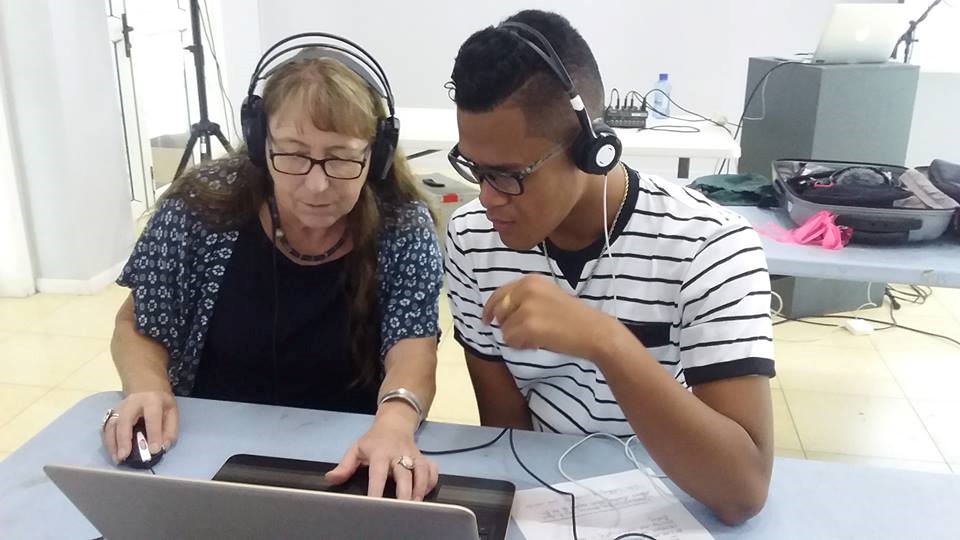 Behind the (gender) lens: participatory film in Samoa

So many of us look at films, be them long or short, in the cinema or on YouTube, and for each, the story stimulates a response ranging from laughter to sadness or even anger. Beyond the obvious entertainment however, films can foster empathy, understanding and widen the viewer’s world view. Participatory research continues to use film as a medium through which sensitive narratives are shared and by talk back, stimulates dialogue with the audience about topics raised. Achievement of these objectives however, requires careful planning, implementation and monitoring. The 2018 Centre for Samoan Studies Film Challenge (Film Challenge) focused on gender issues and for the organisers and participants, provided many lessons on how to implement participatory research using film making, many of these lessons were gained through trial and error.

The idea of the Film Challenge emerged during a team meeting to prepare for the Samoan workshop which was a component of a larger project exploring the use of film to stimulate dialogue on gender issues in the Pacific. Samoa was one of the three countries where a workshop would be held (Fiji and Papua New Guinea being the other two) and in preparation for the workshop, the planning team thought “wouldn’t it be great to showcase Samoan film makers? Any ideas?” After a rather drawn out silence, we faced reality, there was a paltry availability of film content produced by Samoan filmmakers on the topic of gender. The reasons for this rather depressing realisation were lengthy and quick in coming, from lack of training opportunities to cost of equipment to difficulty in screening films to wider audiences.

So we contemplated strategies to address this need, and with two non-filmmakers at the lead, a proposal was drafted and peddled to local and regional agencies. The rejections came in decisively, some with longer explanations than others about why this concept would not be funded, meanwhile the support for the idea of the film challenge remained positive. One direct email to the Pacific Media Assistance Scheme (PACMAS), outside of their funding cycle, led to a skype meetings and funding. This was the first of many lessons learned, that having a good idea regardless of the benefits it can yield, does not equate to securing funding easily. It is a race measured in persistence and determination.

Accompanying the lesson that a great idea does not mean funding will be easily found, was the lesson that interest does not translate to action, on the part of participation. The organisers used all means of advertising at their disposal – TV interviews, newspaper coverage, social media advertising on Facebook groups Makeki Online and Apia Expats, both with high usage by the Samoan public. Flyers were also posted at the university, emails sent out to all staff and the flyers emailed out to personal and professional email networks. Despite these valiant efforts, the number of participants was lower than anticipated and quite difficult to maintain across the time of the training workshops. Difficulties identified by those who participated included the scheduling of the workshops during the academic semester which in hindsight was a significant oversight. Which comes to lesson three – scheduling needs to consider the availability of potential participants, even if it means pushing back the start date of a project.

Sometimes what you envision pales in comparison to what is created, only if you let ideas evolve organically – lesson four. As organisers, who had conducted research in gender in Samoa, we started with what we came to realise were our own thoughts about what films on gender should address, and these were only a few of many ways the participants of the film challenge had experienced gender issues in their lives. As the experienced trainer from the Australian Broadcasting Corporation, Catherine Marciniak, expertly took them through writing their story and producing a shooting script, we sat and observed, with little interjection. Ideas emerged that we could not have imagined; from the rules girls have to abide by compared to boys, the empowering role of sport in a young woman’s life, to the impact seeing parents who shared responsibilities would have on a young man’s choice to be a nurse. These were just some of the topics covered in the films (all films can be viewed on the PACMAS Facebook page).

The films have since been shown on several occasions by a local television company and are readily available via the PACMAS Facebook page. The number of views has varied based on the topic, with Boss at work, Nofotane at home, having been viewed 10,000 times (to date) compared to Becoming a Man which has been viewed 712 times (to date). Presentations on the project have been well received at local and regional workshops and conferences, raising keen interest in potential collaboration and support for film related projects. Beyond the numbers that measure reach, is the impact of the Film Challenge on the participants – those behind the camera who gained confidence in these new skills and expressed pride in themselves at their accomplishment, some of the writers who through telling their story gained cathartic, healing release and ownership of their experience, and the actors who saw themselves and their Samoan reality on screen in a way that is not often seen.

This endeavour provided an opportunity for the organisers to learn as well, to grasp that participatory research using film requires evolving consent, as in the film where a village was identified as the one from which a family was banished after the death of the father (in Samoa, a surviving spouse may be asked to leave the home if that home is in the deceased spouse’s family). It also requires the balancing of the ownership of the personal narrative and the message relayed by the film (if it promotes unhealthy stereotypical messages), as in the film which appeared to promote the stereotypical role of woman as wife and mother. Lesson five – sometimes pilots can be messy and fraught with challenges, but through taking the lessons forward, the next time will be even better.