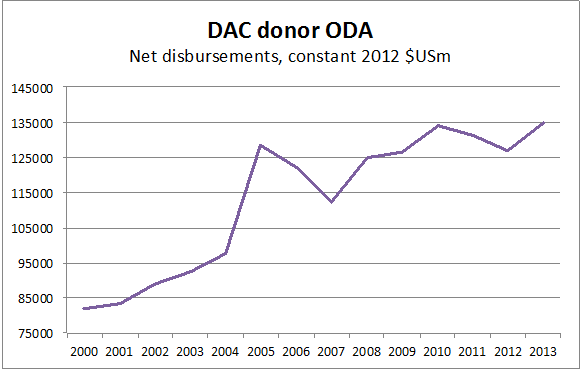 Aid from OECD sources has resumed its visually pleasing ascent, as shown in the figure at left. The OECD’s data on global aid flows in 2013, released on 8 April, show an increase of 6.1 per cent in real terms over the 2012 outcome, with net disbursements of Official Development Assistance (ODA) from OECD donors reaching a new high of $US135 billion at 2012 prices. OECD Secretary-General Angel Gurria said, ‘It’s heartening to see governments increasing their development aid budgets again, despite the financial constraints they are facing’. (Australia rained a little on his parade, reducing aid by 4.5 per cent and dropping from eighth to tenth place in the ranking of donors by aid volume.)

What’s going on here? Are we witnessing an unheralded outbreak of generosity and fiscal bravery? The outcome was certainly unexpected. Our own forecast, based on the budget pronouncements of the 15 largest donors during 2012, and taking into account the announced $US3.9 billion increase in the UK aid budget, was that aid would at best grow by around one per cent. Here’s what we expected to see when we did our forecasting last year: 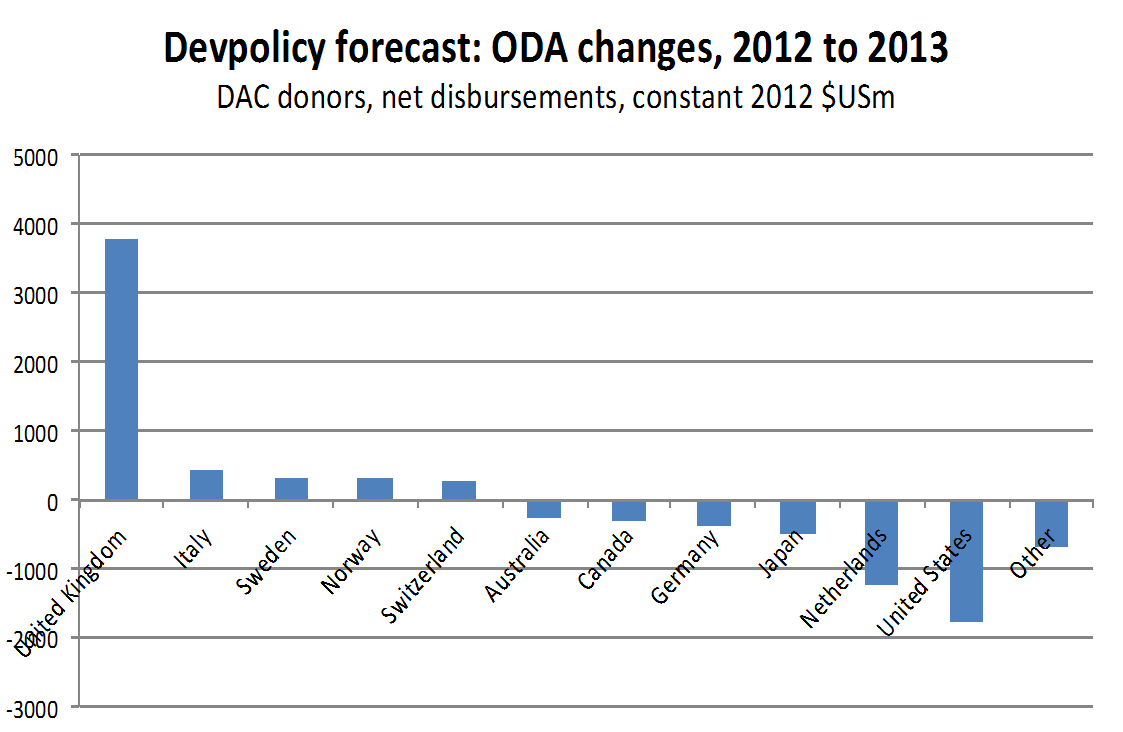 And below you can see what actually happened. Rather than a collective net increase one notch north of nothing, as above, OECD donors delivered a net increase of $US7.7 billion. 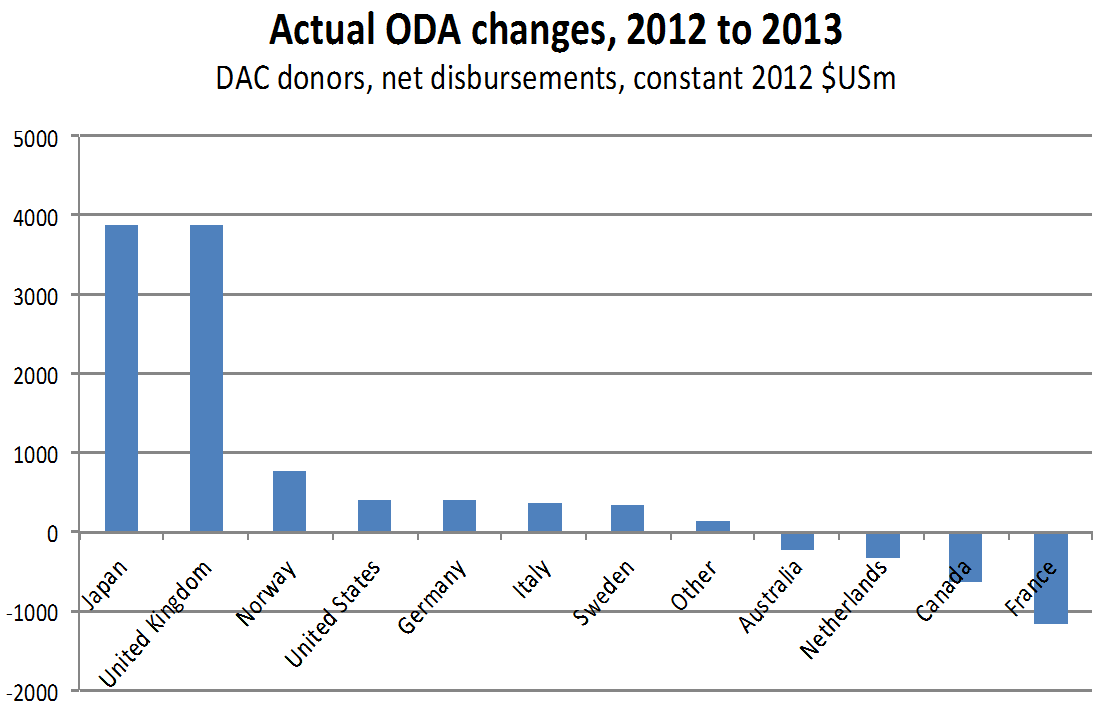 Data for the above and following charts are from OECD.stat and/or OECD statistics on resource flows to developing countries, with some author processing.

That Australia, the Netherlands and Canada—notably likeminded donors these days—were in cutting mode was well known, though in the end the Netherlands cut less, and Canada more, than we had expected. That Norway, Sweden and Italy were on the upswing was also clear, though Norway contributed more than we had expected. With the US and Germany, the direction and magnitude of change was, and for the last few years has been, quite hard to pick—and we picked wrong. In the end both of these donors posted increases, though not large in proportion to their budgets (one and three per cent, respectively).

The $US3.9 billion contribution by the UK comes as no surprise—though it is a wonder the UK government managed to spend it, and it will be interesting in time to find out how. The equally big contribution by Japan—which takes its ODA/GNI ratio from 0.17 to 0.23 per cent in a single year—is a sizeable surprise, on which more below. 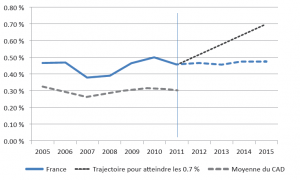 The big reduction in French aid was another. This reduction takes France’s ODA/GNI ratio from 0.45 to 0.41  per cent at a time when it was said to be aiming for 0.46 per cent or more, en route to 0.48 per cent by 2015 (see the chart at left from the report of the 2013 DAC peer review of France’s aid program). We completely missed both of these things, expecting Japan to cut somewhat and France to remain fairly steady.

We’re very happy to be mugged by the 2013 numbers, since they went up rather than down. And we’re inclined to accept that the overall increase is genuinely good news in relation to those donors who provide their aid mainly in grant form, which includes the UK, Norway, the US and Sweden (even if the news was not news in the case of the UK). But we don’t think the 2013 outcome should be interpreted too readily as a collective change of heart. The results at the two extremes of the chart immediately above, for Japan and France, call for some thought. It seems unlikely Japan was overtaken by an exccess of generosity, or that France suddenly turned miserly. A strong hint as to what could be going on is contained in the OECD’s press release, which says:

The same press release notes a four per cent fall in real terms in the level of aid to sub-Saharan Africa from 2012 to 2013, and reports that according to the OECD’s latest survey of OECD donors’ forward spending plans we can expect to see increases in the level of aid to middle-income countries, ‘most likely … in the form of soft loans’.

The OECD data on 2013 aid flows are available only in aggregate. We can’t yet see how flows were divided between various subcategories and in particular how much individual donors spent in the form of loans rather than grants. However, if one looks at data from previous years, it is possible to see quite a strong trend toward greater use of loans by some major bilateral lenders. The chart below shows that three of the four countries that are now the largest providers of bilateral ODA loans—France, Germany and Korea—have been substantially increasing their lending in gross terms since about 2007. Japan’s gross lending has fluctuated within a $US2 billion band but has not exhibited this upward trend: it has essentially been level at around the $US8 billion mark. 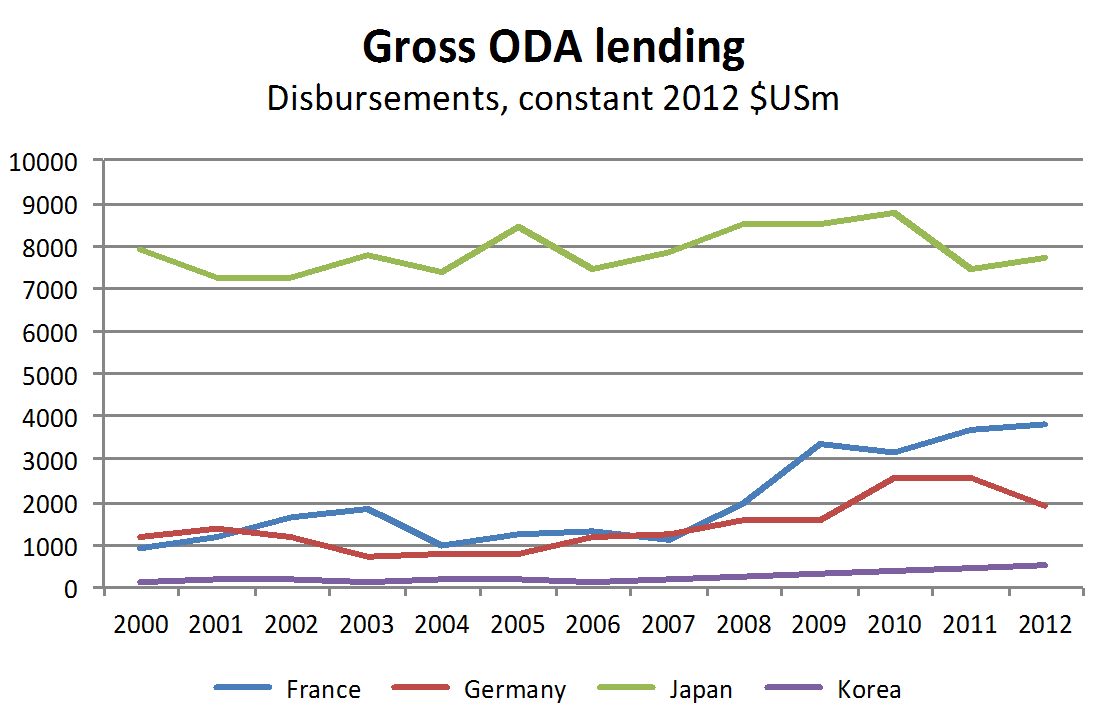 From 2007 to 2012, gross ODA lending from OECD Development Assistance Committee (DAC) donors, not limited to the four named above, increased by nearly one-quarter in real terms (24 per cent) to around $US15 billion, while grants increased by only nine per cent. Meanwhile, total ODA loan repayments to these same donors, which reached almost $16 billion in 2008, have been showing a downward trend and stood at $US13 billion in 2012. As a result, net ODA lending turned positive in 2009 and has been in positive territory for the last four years, standing at about $US2.4 billion in 2012. 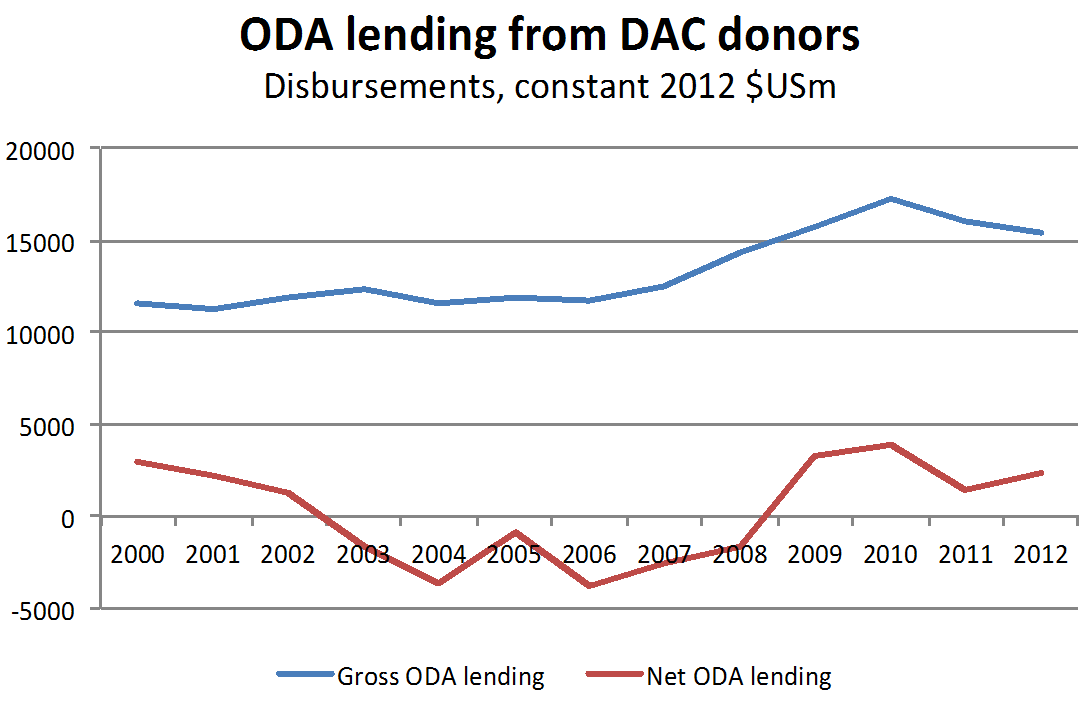 This growth in ODA lending muddies the waters quite a bit for people inclined to celebrate the 2013 ODA increase, for three reasons.

First, there are ODA loans and ODA loans. Most people’s idea of an ODA loan would be something like an IDA credit (pdf), the type of loan offered by the World Bank’s fund for the poorest countries. An IDA credit of the most generous kind has a ten-year grace period during which no principal or interest is payable, zero interest (but minor service charges) and a forty-year maturity. In net-present-value terms, it’s pretty close to being a grant.

However, bilateral donors can and on average do offer loans on much harder terms (that is, shorter grace periods, earlier maturities and/or higher interest rates) and still call them ODA loans (see DAC Table 22 for some interesting numbers). This has been the subject of much controversy within the DAC, particularly after a respected former DAC Chairman, Richard Manning, wrote a damning open letter on the subject. Under current DAC rules, a donor can even make a small profit on a loan and still classify it as ODA—though of course they will still suffer an opportunity cost. France’s ‘hardest’ ODA loan carries an interest rate of 5.2 per cent, has a maturity of 15 years and a grace period of 2.5 years, and conveys no subsidy at all. If ODA grows courtesy of increased net spending on loans such as these, there’s not much cause for celebration.

Second, ODA loans generally get reported as ODA at face value, as disbursements are made. If donor X commits and disburses an ODA loan of $100 million to country Y in 2013, the expenditure is recorded as a $100 million flow of ODA from donor X to country Y in 2013. Somewhat later, when country Y commences repaying the loan, each principal repayment is recorded as a negative ODA flow from donor X to country Y in the year in which it occurs (interest payments are left out of account). This is all logical enough. However, an important implication of this practice is that when there is a surge in lending from one or more of the big bilateral lenders, it causes a surge in net total ODA, which some years down the track must be followed by a surge in negative ODA. It’s like borrowing against future ODA. This is not a large issue when the loans in question are highly concessional, like IDA credits: by the time the money flows back its real value is greatly diminished and it creates only a small negative ODA entry. But a surge in ODA loans on harder terms will be followed, as night follows day, by a significant surge in negative ODA. The less concessional donor X’s loan portfolio is, the more donor X is effectively borrowing from future ODA.

Third, bilateral ODA lending is generally not subject to annual budgeting. The various bilateral development financing institutions operate as banks, capitalised by governments but borrowing funds in international capital markets for on-lending, on terms that more than cover their own borrowing costs, to developing countries. They may establish annual lending targets and they are of course subject to capital constraints, which prevent them from increasing lending beyond certain levels. But they do not receive and disburse predetermined amounts of public finance each year in the way that bilateral development agencies do. Thus it is no easy matter to predict how much they will commit or disburse in a given year. And it is not possible to interpret ODA lending surges as expressions of generosity on the part of their owner governments.

What can be concluded from the above? For one thing, that the surprising outcomes for Japan and France may well reflect fluctuations in gross or net ODA loan disbursements from their development financing institutions in both 2012 and 2013. Japan might have surged in 2013 relative to 2012. France certainly surged in 2011 and 2012 (increasing gross ODA loan spending by over 20 per cent) and might have relaxed somewhat in 2013. Given that France is known to lend on very hard terms, it’s hard to mourn the reduction in French ODA if it is indeed the result of a fall in lending. A surge in Japanese lending might well be a good thing, but we don’t have any information at this stage on the terms and destinations of this lending.

It’s also difficult to avoid the conclusion that forecasting ODA outcomes, while never an easy matter, is now even more of a mug’s game. Where ODA comes from off-budget sources, it is very hard to obtain information relevant for forecasting trends. And where ODA is provided on very hard terms, it’s not really worth predicting anyway. More ODA is only a good thing if it doesn’t entail less ODA later and actually involves real concessionality. We won’t give up on forecasting just yet, but will next time confine our efforts to on-budget, grant-based aid.