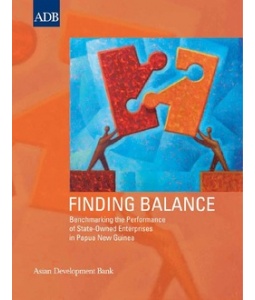 The Asian Development Bank (ADB) recently launched its latest state-owned enterprise (SOE) benchmarking study, entitled Finding Balance: Benchmarking the Performance of SOEs in PNG.  This is not only the first time that PNG has participated in the study series, but the first time that the financial performance of PNG’s SOEs has been made publicly available. The study compares PNG’s SOE portfolio over a 9-year period with that of 5 other countries in the Pacific (Fiji, Samoa, Solomon Islands, Marshall Islands and Tonga), and finds that while PNG’s SOEs have produced net profits that are in the upper range of those in the countries benchmarked, they have done so at a substantial cost to the government in terms of ongoing fiscal transfers and other subsidies, and limited service delivery, particularly in rural areas.

From FY2002 to FY2010, the average return on equity (ROE) of the SOE portfolio was 4.2% in PNG, compared to 5.6% in Tonga , 0.3% in Samoa, –0.6% in Fiji, –11.0% in Solomon Islands and –13.3% in the Marshall Islands. In each country, this rate is not only substantially below the profitability target set by the government, and/or a commercially established risk adjusted return, but is also achieved with subsidized capital. In PNG, the K500 million in cumulative profits generated by the portfolio from FY2002-2010 is net of an estimated K700m in ongoing equity contributions by the government, further underscoring the fiscal cost of the SOE portfolio. By absorbing large amounts of scarce capital stock on which they provide very low returns, crowding out the private sector, and diverting public funds that could otherwise be invested in such high-yielding social sectors as health and education, SOEs in PNG as well as in each of the 5 other countries surveyed act as a drag on economic growth.

That SOEs tend to perform poorly is perhaps not news. They often suffer from weak governance arrangements, conflicting mandates, the absence of hard budget constraints, and lack of accountability. SOEs do not operate with the same efficiency incentives as private sector firms, and are often directed to deliver unprofitable services known as community service obligations (CSOs) without adequate compensation. What is news, however, is that the PNG Government is openly and loudly calling for reform, and allowing the poor financial performance of the SOEs to be made public for the first time in at least a decade. Indeed it is the Independent Public Business Corporation (IPBC), which manages the SOE portfolio, which requested the ADB to conduct the study. It is also the IPBC, working with the former Minister of Public Enterprises, Sir Mekere Morauta, which recently took important steps in strengthening the accountability framework for its SOEs, including the:

In taking these actions the government of PNG is emulating the reforms already underway in a number of the other countries in the survey, most notably Solomon Islands, Samoa and Tonga. Each of these countries has a robust legal and regulatory framework for SOEs which requires the SOEs to operate as profitable enterprises, deliver CSOs on a commercial basis, publicly disclose their financial results and appoint professional directors based strictly on skills and experience. In Samoa, 180 new SOE directors have been appointed in 2012, using an independent selection committee. In Solomon Islands, all members of parliament have stepped down from SOE boards and CSO contracts have been prepared for the major utility SOEs. In Tonga, all elected officials stepped down from SOE boards and the summary financial results of the SOEs are published annually in local newspapers. These measures have raised the transparency, accountability and commercial orientation of the SOEs, leading to reduced fiscal transfers and over time to better services.

In PNG, the new Minister of Public Enterprises, Ben Micah, has endorsed the findings of the study and announced his intention to pursue a number of the recommended reforms, most notably the finalization of CSO, onlending and dividend policies for SOEs. Encouragingly, these are also priorities for the Department of Treasury, in addition to a public–private partnership bill. Taken together, these reforms should not only enable SOEs to improve their performance, but will also lead to increased investment opportunities and expansion of the private sector as a partner for the delivery of infrastructure and related public services.

Other important governance reforms, however, remain particularly challenging. Chief among these is the further de-politicization of the SOE board appointment process. The recent amendments to the IPBC Act, passed in May 2012, give the National Executive Council (NEC) the power to appoint SOE directors on recommendation of the Minister of Public Enterprises. (Previously, IPBC had the power to appoint SOE directors subject only to NEC veto.) It is likely that this new process will result in director appointments being based on political considerations rather than strictly skills and industry experience. Moreover, removing IPBC from the director appointment process undermines IPBC’s accountability for the SOE’s performance. A second key reform, requiring SOEs to have a clear commercial mandate, has also proven elusive. Neither the current IPBC Act nor the establishing legislation of the SOEs require IPBC nor the SOEs to operate profitably, and as such they lack a clear framework to guide the decisions of the board.

Among many politicians in PNG, SOEs are still considered important extensions of political influence, so their financial results are not seen as a relevant performance indicator. Changing this mindset will be critical to achieving meaningful SOE reform, and it is therefore encouraging that both the Department of Treasury and IPBC have stressed the increased commercialization of the SOEs as a key goal. Indeed the CSO policy is designed specifically to allow the SOEs to continue to provide CSOs in a way that supports their commercial orientation.

The experience of PNG and of the other five Pacific countries participating in this benchmarking study demonstrates that SOE commercialization is possible, but requires sustained political commitment to strengthen the underlying SOE legislation, resist the temptation to directly interfere in the business of the SOEs, and allow greater private sector participation in delivering the goods and services traditionally provided by SOEs. These reforms are now underway in PNG, and with increased public awareness of the rationale for and benefits of the reforms, it is hoped that the necessary political support can be garnered to see them sustainably implemented.

Laure Darcy is a state-owned enterprise advisor to the Asian Development Bank and the co-author of a new ADB report: Finding Balance, Benchmarking the Performance of State-Owned Enterprises in Papua New Guinea. SOE reform is one of the key focus areas of ADB’s Private Sector Development Initiative (PSDI), which is co financed by the Australian Government. The initiative supports efforts by developing member countries in the Pacific to encourage private sector-led, sustainable economic growth.

Laure Darcy is a state-owned enterprise adviser to the Asian Development Bank and the co-author of a new ADB report: Finding Balance, Benchmarking the Performance of State-Owned Enterprises in Papua New Guinea.