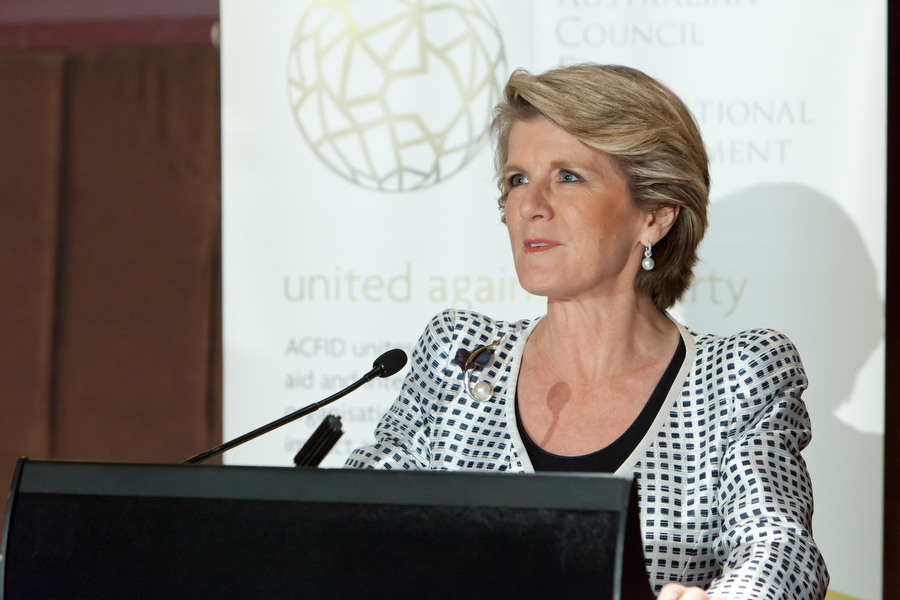 Foreign Minister Julie Bishop’s address to the ACFID Council last week was much anticipated. It was her first major statement on aid since the Coalition won government in September.

1. Will the national interest be given greater weight in aid decisions?

AusAID and DFAT are being merged, the Government says, to better align aid and diplomacy. But what difference will this actually make in practice to aid management? The speech gave few clues since it stuck to the line that aid was both good for the national interest and good for development. For example:

Aid is a powerful tool in our statecraft designed ultimately to protect and extend Australia’s broader interests and we must use it to make the most significant impact abroad and also at home.

The Government’s approach of economic diplomacy brings our aid program together with our foreign and trade policy priorities in the pursuit of broader economic development, which will not only support prosperity and growth in Australia but of course in the wider region.

Branding will be big. It is a “key mechanism for enhancing the visibility of the Australian Government’s international development initiatives” and “a powerful tool in the diplomatic toolbox.” And the DFAT Secretary has ruled out using aid for commercial advantage. But it is hard to believe that there will be no other manifestations of a greater alignment of aid and diplomacy.

2. Why was AusAID merged with DFAT?

Tanya Plibersek has attacked the government for not giving a clear rationale for the merger, and one certainly didn’t emerge from the speech. This is the closest it came:

Australia clearly has a national interest in the way these investments are directed and an integrated DFAT and AusAID will be better placed to pursue that goal from a broad strategic perspective, both in terms of trade and investment and in terms of stability and prosperity in our region.

Some account of why an integrated department would be better placed would have been helpful.

3. How will aid spending change?

The main theme of the speech was that aid will be “focused on contributing to sustainable economic development.” There was a strong emphasis on infrastructure in particular. But if there is going to be more aid for economic development, and, if total aid is not going to grow, what will there be less of? Not education, since there will also be a “renewed focus on education”. That leaves governance and health as the two other major aid sectors. Both got a tick, with a commitment that the aid program will continue to work “in these areas” since weak governments and poor health are also constraints on “the ability of economies and communities to grow.” So, no real sectoral guidance, and also worth noting that decisions have not been made on this year’s $656 million of aid cuts.

Well, some important unanswered questions, but the speech did provide some indication of Government’s thinking on three key issues.

4. Will the merger with AusAID change DFAT?

The assumption so far has been that the merger of AusAID with DFAT is life-ending for the former but business-as-usual for the latter. But Ms Bishop cast doubt on that assumption by her suggestion that, as part of the Government’s focus on education, “diplomats will advocate for education reforms and more effective education spending by partner governments.” Diplomats, not aid managers. I don’t imagine DFAT has done much lobbying in the past for education reform and spending. It would be great to see all of DFAT, and not just the aid staff, engaged with the pursuit of development.

We might not know how aid will be spent, but the speech gave a big hint about who will be spending it:

Australia’s aid program will be driven by government and delivered through NGOs, businesses, and trade partnerships and enterprises and other community organisations with proven records of delivering results.

It is not clear who the other community organizations are, but it may be groups like Rotary. The surprise omission from this list is the category of multilateral and regional organizations, currently the biggest channel for Australian aid, spending about 40% of it. It’s another sign that, as a group, the multilaterals are out of favour with the Coalition.

6. Is the effectiveness agenda dead?

No. The “aid effectiveness” sheet on the AusAID (now DFAT) website was one of the first to go. But Ms Bishop was reassuring on this front:

We’ll be strengthening performance measures and introducing rigorous benchmarking, which I see is the next logical step in the progression of the aid program. I want to see a strong performance culture and we’ll look to adjust our investment decisions based on effectiveness.

I (Stephen) also asked her about this during the Q&A. She said (as I wrote it down) that she wanted “as much openness, and embrace of a performance culture as possible”:

And there was more. We’ll have to leave further analysis for later, but for noting now:

Stephen Howes is Director of the Development Policy Centre. Ashlee Betteridge is a Research Officer at the Centre.