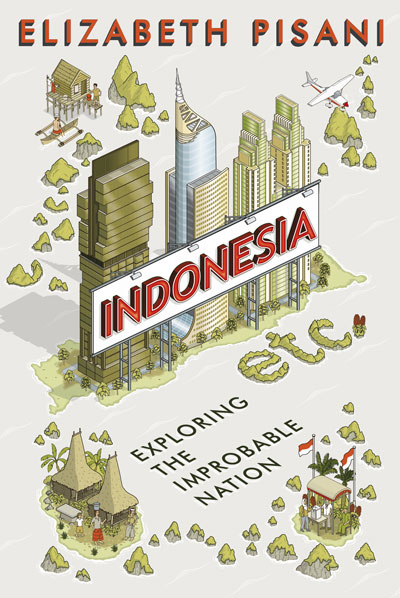 Elizabeth Pisani, a former newswire journalist who was based in Jakarta during the Suharto era before making a career change into epidemiology, has previously brought us The Wisdom of Whores: Bureaucrats, Brothels, and the Business of AIDS. Her latest offering, Indonesia Etc.: Exploring the Improbable Nation, takes a ‘random sample’ epidemiological approach to Indonesia’s 17,000ish islands to try to figure out just what holds the country together, against all odds.

The ‘etc.’ in the title refers to the somewhat vague 1945 declaration of independence from Dutch colonialists: ‘We, the people of Indonesia, hereby declare the independence of Indonesia. Matters relating to the transfer of power etc. will be executed carefully and as soon as possible.’ Pisani argues that Indonesia has been trying to figure out the ‘etc.’ ever since.

Part adventurous travelogue, part investigation into nationbuilding, Indonesia Etc. is easy and entertaining to read. For those who have spent some time in the country, you will likely find yourself nodding along with the author’s observations and experiences. For those who know little of our neighbour, it’s a worthy and engaging overview.

Pisani’s career has meant she has a long-running and deep engagement with Indonesia. Through her travels in the book (occurring during 2011-12), she returns to old friends and villages she visited some 10 or 20 years earlier, giving us a view of the rapid change that has swept through many communities, as well as the things that have stayed the same. She takes the time to stay in rural villages on far-flung islands, relying on the hospitality of locals, and to ride some of the most uncomfortable transport options available. It is through her travel encounters that the book achieves one of its great strengths – giving voice to local people, their concerns and perspectives, especially those of women.

Though perhaps not the target audience, development wonks will find plenty to chew on. There’s the challenges facing tuna fishers near the border with the Philippines, where Indonesia’s crippled infrastructure is damaging livelihoods (Indonesia’s poor infrastructure is a running theme throughout). There’s an examination of the huge quality issues pervading Indonesia’s basic education system. There’s a look at the attitudes surrounding work in the country’s public service. We see examples of policy changes that have worked, and many that haven’t. We get some insight into adat (local custom and culture) and how it at times conflicts with goals of economic development, yet provides other benefits. Pisani also visits Aceh, to look at the legacy of post-tsunami aid and peace. We see the pervasive nature of money politics at the local level, and there is discussion of religious tolerance, conflict and extremism. And there’s some scathing village-level perspectives of the perils of the decentralisation policy and the problems plaguing sound public financial management in new districts.

(And for those who attended Mari Pangestu’s recent address at our centre, if you are seeking anecdotes to back up her points on the need to engage local actors and recruit local champions to drive policy reform, this book has plenty.)

As an ex-journalist myself whose own interest in development was in part sparked by seeing the contrast between life in Jakarta and the other parts of Indonesia I saw in my travels, I very much enjoyed Pisani’s take.

While the book doesn’t provide firm answers or grand conclusions, it does give us insight into what makes this improbable nation tick—both the good kind of etceteras and the more problematic.