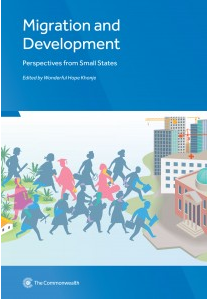 Migration and Development: Perspectives from Small States contains a compilation of chapters discussing the dynamics of migration and development in small states, including case studies from southern Africa, the Caribbean and the Pacific (see Note 1). The book was edited by Wonderful Hope Khonje and published this year by the Commonwealth Secretariat. The chapters are based on an experts’ meeting held in Jamaica in 2012 on the development costs and benefits of migration to small states. The book is intended for policymakers, experts and academics, and aims particularly at helping policymakers to embrace migration as an inevitable phenomenon and devise policies to maximise the benefits from and minimize the costs of migration to small states. The book fills a gap in the migration literature in that previous studies on the migration and development nexus have predominantly focused on developing countries in general rather than on small states, with their special characteristics and particular development challenges.

The book is 11 chapters, written by nine authors. After a brief introduction, Khonje’s background chapter on the characteristics of small states sets the framework for the following chapters. Two chapters summarise the existing temporary labour migration programs in the Caribbean and Pacific respectively, three chapters deal with migration and remittances (Jamaica, Guyana, and Tonga and Samoa), two chapters with the Pacific and southern African diaspora respectively, one focuses on migration and development in Lesotho, and the final chapter investigates the international recruitment of skilled workers. Some chapters include specific policy recommendations while others do not.

While the range of topics and geographical areas covered in this publication make for an interesting read of individual chapters, they also lead to a lack of cohesiveness. There are few cross-references between the individual chapters and, importantly, there is no concluding chapter to bring together the various contributions, identify similarities and differences, and draw some general policy recommendations. The lack of a concluding chapter is the greatest shortcoming of the book.

Khonje’s chapter provides a useful overview of the geographic, demographic, environmental and economic characteristics of developing small states and the key issues in migration and development facing them. He shows that small states lose more people to migration than larger countries as a percentage of their population and provides a table that shows that in 2012 the net migration figure as a percentage of the population was –3.1 per cent for Pacific Island small states, which is higher than in any other country group (although the table contains a mistake in that the total population of the Pacific Islands is given as 2.3 million, which has to exclude Papua New Guinea with its more than 7 million people, although PNG has explicitly been included in the category of small states by the Commonwealth). According to Khonje, remittances potentially play a larger role in the economic development of small states compared to larger states.

In the next chapter, Headley and Henry explore temporary work programs in the Caribbean, concluding that the three existing programs (the US farm workers program and the US hospitality program, both recruiting from Jamaica, and the Commonwealth Caribbean Seasonal Agricultural Worker Programme, recruiting workers from Jamaica, and Trinidad and Tobago to Canada) have been operating well and have been beneficial for people in the source countries. Partly modeled on these earlier programs, Australia and New Zealand have introduced agricultural seasonal work programs for workers from the Pacific. While providing some interesting historical background to temporary migration in the Pacific, Connell’s analysis of the current schemes is outdated, especially as New Zealand’s Recognised Seasonal Employer (RSE) scheme and Australia’s Seasonal Work Program (SWP) have undergone considerable changes since they were first introduced in 2007 and 2008 respectively. For instance, he discusses the Australian pilot scheme without even referring to the scheme itself, which has been operational for several years. Similarly, the numbers and data presented are outdated, possibly reflecting the data that was presented at the 2012 meeting in Jamaica. The chapter also includes a section on the regional trade agreements PICTA and PACER Plus, and some claims in this section are not only outdated but outright erroneous (such as the claims that PACER Plus does not contain substantive trade liberalisation provisions, which it sets out to do, and that it is an umbrella agreement under which the first step of liberalisation is PICTA, when in reality these two agreements are parallel to each other and are not part of an integrated process). Connell concludes that the existing schemes are a triple win, for the workers, the countries of origin and the countries of destination.

Like the previous chapters on labour migration schemes, the following three chapters on remittances in Guyana, Tonga and Samoa, and Jamaica respectively would have benefited from including more up-to-date statistics. They potentially make for interesting comparisons in the level and development impact of remittances. Unfortunately, readers have to move back and forth between the chapters to draw out the comparisons themselves. In the chapter on Samoa and Tonga, attention is drawn to the loss of skilled workers and the issue of high financial transaction costs that have started to be addressed at the political level. There is considerable overlap with Connell’s previous chapter on temporary work schemes and a repetition of some factually wrong information, such as on regional trade agreements. Jamaica faces similar challenges to the Pacific countries in that it loses valuable skills, in particular in the health sector, while remittances are widely regarded as having beneficial consequences both for households and the wider economy.

Connell’s third chapter in the volume discusses the Pacific diaspora, providing an historic overview and region-wide information on skilled migration, remittances, and return migration. He draws together some interesting, albeit outdated, information and explores both negative and positive consequences of these migration flows for sending countries. The other chapter on diasporas focuses on migration within southern Africa, discussing Namibia and Botswana as migrant-receiving and Lesotho and Swaziland as migrant-sending countries. This approach adds a new dimension to the book overall, namely that of south-south migration, which does not feature in the other chapters. Migration analysis in southern Africa, just as in the Pacific, is hampered by a lack of reliable data. The following chapter focuses on Lesotho, exploring in more detail the costs and benefits of migration for the country.

The final and somewhat disconnected chapter of the book explores international recruitment of skilled workers with an emphasis on the impact on small states, some of which have lost a high proportion of their skilled workforce, resulting in brain drain and substantial financial loss. The author observes that there has been a striking increase in the number of skilled women moving internationally. As such, this final chapter is the only one that takes gender into account. The author also argues that the definitional difference between sending and receiving countries is increasingly breaking down as many countries, including small states, are simultaneously sending and receiving countries – an observation that could stimulate an interesting discussion.

Overall, all chapters focus on the economic impact of migration from a largely macroeconomic perspective. There is little reference to the individual perspective, including on issues such as the right of migrant workers to decent employment overseas, or of individuals to make decisions on moving or staying (within the parameters of visa and residence requirements). Apart from the two chapters providing some conceptual background (on migration and development in small states, and on international recruitment of skilled workers), the book would have benefitted from additional theoretical chapters. A chapter on forced migration, including a discussion of the link between climate change and migration would have been valuable, given its relevance for small island states in particular. With the exception of the discussion on southern Africa, the book also overlooks the fact that there is substantial south-south migration and that some developing countries attract large numbers of foreign workers from developing and developed countries. For instance, in the Pacific, PNG and Vanuatu are predominantly immigration rather than emigration countries. These flows of migrants into small states have strong development implications that would merit a discussion.

In sum, the book includes some interesting case studies and provides insights into the important phenomena of remittances, diaspora networks, temporary work schemes and skilled migration in small states. The major strength of the book is the inclusion of case studies from three geographical regions and the fact that two of these are island regions (the Caribbean and the Pacific) while one is not (southern Africa). This in itself is interesting because, more often than not, island regions are compared with each other rather than with non-island small states. Having said that, a comparative analysis is lacking. The potential value of the book would have been increased tremendously by including a concluding chapter that explicitly draws these comparisons and makes policy recommendations. Without these, the book does not, as it sets out to do, provide much guidance to policymakers.