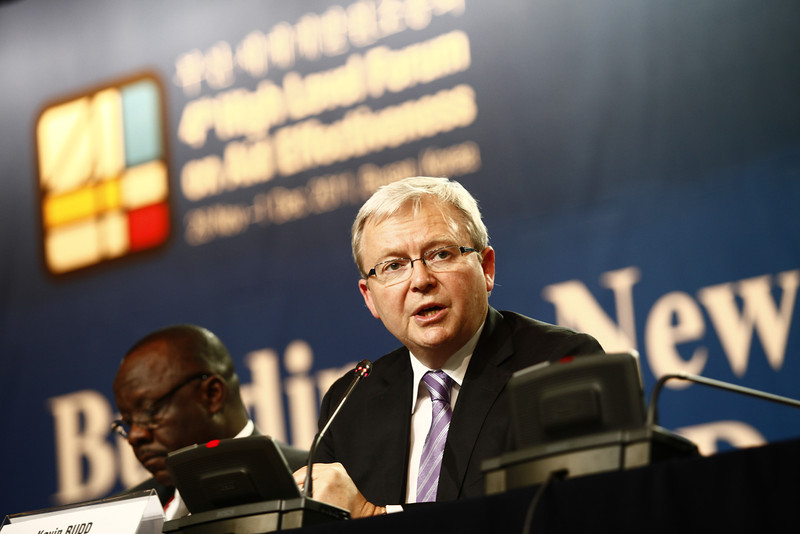 More than 3000 people from donor and recipient governments, UN and other development agencies, Civil Society Organisations (CSOs) and the private sector signed off on the Busan Declaration on Aid at the High Level Forum on Aid Effectiveness in Busan, South Korea, yesterday.

The Forum revealed a lot about the emerging geopolitics of aid, including a new form of ‘South-South cooperation’. Australian NGO representatives Marc Purcell, Ian Wishart and Glen Bond attended the Forum (as did Kevin Rudd, Hillary Clinton and UN Secretary General Ban Ki-moon). Here they attempt to make sense of the trends and tensions revealed in Busan, as well as examining what the Forum means for NGOs working in international development. They also give their take on the good, bad and ugly of the Busan Declaration itself.

A new geopolitics of aid?

After three days of at times heated negotiations, the international aid community came to an agreement on a new international architecture for aid that will take the world up to 2015 – the year the Millennium Development Goals are meant to be achieved.

The agreement reveals a tenuous deal between the traditional donors of the OECD, including Australia, and the ascendant new donor economies of China and India.

New ‘southern’ donors including China, India and others – most of whom are not OECD members – will have the option of ‘voluntarily’ working towards the commitments in the Busan Declaration which are a ‘reference’ for them.

The ‘donors club’ of the OECD appeared divided on their approach to China at times. The UK Secretary of State Andrew Mitchell, fresh from Beijing, urged that China should not have to adhere to mandatory commitments. Kevin Rudd and Hillary Clinton differed from this view, urging that there should be no watering down of commitments and arguing for greater aid transparency for all.

The final outcome, allowing nations such as China to voluntarily adhere to their commitments, recognises the geopolitical reality of a two track approach between OECD DAC members, with their rules-based approach, and the ascendant economies of ‘donor/recipients’ like China. These nations appear to have one foot in both camps, with no requirement to make firm commitments. Time will tell whether they take any concrete steps towards untying aid, introducing transparency on aid flows and working through developing country systems.

The traditional OECD donors want greater transparency, untying of aid, and country led plans for poverty alleviation as well as mutual responsibility for results. They achieved modest advances in these areas under a ‘new deal’ that builds on previous aid agreements at Global Forums in Accra in 2008 and Paris in 2003.

A new language of ‘South-South’ cooperation was championed at Busan, reflecting a growing form of economic cooperation between middle income countries and poorer states. Some argue this trend is down to the drive of the new cashed-up superpowers, who engage as aid donors at the same time as they secure markets and resources for themselves in developing countries. Their use of aid and soft loans with few overt strings attached, as a lubricant to this commercial end, has been controversial in some developing countries, including Zambia.

It was clear too at Busan that many developing countries have embraced this modality and rhetoric, seemingly keen to compete for the investment and aid of these emerging powers (including India and China) and welcoming their focus on building infrastructure projects.

The aid provided by these new economies is significant. China’s aid alone is estimated to be $30 billion per annum and is focused on mining and infrastructure, while India is taking its IT know-how to Africa.

The ‘South-South’ rhetoric pushed by some at Busan both describes the reality of a certain type of economic development cooperation and is also reminiscent in tone of the ‘Asian values’ bullishness spruiked by Lee Kuan Yew in the 1990s.

The significance of the Busan Declaration

Despite all the drama of geopolitics and a clearly shifting aid landscape, the Busan Declaration includes some solid achievements. Some of these (with relevant paragraph numbers) are noted below.

This paragraph about the catalytic role of development cooperation mentions human rights and significantly introduces the language of ‘beneficiaries and citizens’. It elevates people as recipients of aid. Previous aid conference statements have focused on donors and recipient governments only.

Historically the focus has been on governments in this area also, but this paragraph has a wider notion of ownership — implying that people or their parliaments control development.

Busan recognised the need to redouble efforts on gender inequality and this issue is put forward as an end in its own right. The need to have disaggregated data in government budgets and targets and to address inequality in all aid efforts, including peacebuilding, is new in DAC.

This acknowledgment of the significant role of Civil Society Organisations (CSOs) is more prominent since the last conference in Accra in 2008. Our key role as development actors is recognised. Acknowledged too is that donors have a responsibility to promote what CSOs have called an ‘enabling environment’ in the CSO Istanbul principles. It acknowledges that CSOs help people claim their rights.

Time bound requirements are included for transparency and the International Aid Transparency Initiative (IATI). Hillary Clinton committed the US to signing on also, which represents a large proportion of global ODA.

Busan poses a number of challenges for non-governmental actors such as aid and development NGOs and academics in this new global aid environment.

Hillary Clinton called on NGOs to work more clearly through country systems and country development plans. What do we think about this? Should we align with governments? Or is our first allegiance to the people? Or do we innovate at the edges?

The time bound commitments of OECD DAC donors for greater transparency by 2015 are also a point where NGOs need to reflect. NGOs need to look at how they can become more transparent, because government encouragement and public expectations will grow in this area.

The Declaration focuses clearly on aid achieving results and perennial ‘value for money’ language re-appears, indicating that this is a global political push by governments. This will give weight to AusAID’s new emphasis on this area. Value for money still appears to be primarily shaped by a narrow desire to get quantitative results, i.e. the number of KMs of road built, or the numbers of beneficiaries receiving bed nets. Using economics to obtain a broader understanding of medium to long-term developmental outcomes does not seem apparent. NGO- and university-based developmental efforts will increasingly be seen through this lens and the qualitative areas we prioritise, for example, participation and reduction in gender inequalities, do not lend themselves on first glance to easy economic analysis. Some collective work will need to be done on defining the outcomes we want to see from our programs and applying an economic analysis so as to have clear information on the economic value of our approaches to development.

It was also clear that while the private sector was thin on the ground at Busan, governments from all countries prioritised the primacy of economic growth, the importance of foreign direct investment and the private sector as engines of growth. A lot of store was placed in new forms of collaborations between business, governments and CSOs. For example, the developmental power of the spread of mobile phone technology was highlighted by AusAID’s Peter Baxter, the head of a US mobile company, and the head of USAID in a new joint venture.