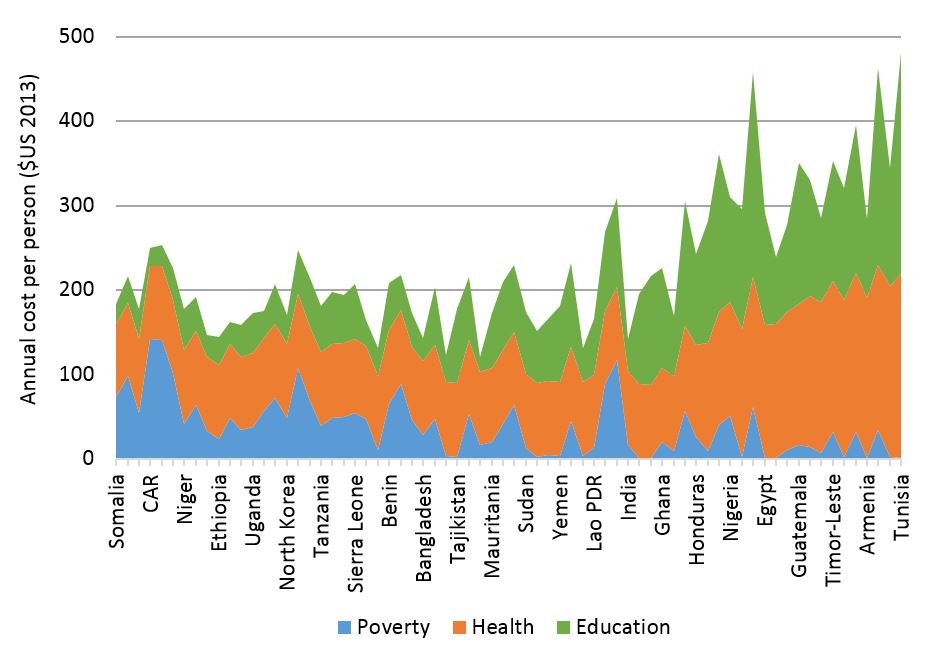 Can developing countries afford the SDGs?

2016 marks the beginning of the Sustainable Development Goals (SDGs) and national governments are grappling with how to implement them. Aid donors are also considering how they can best partner with national governments to see the goals achieved by 2030. This raises a number of important and largely unanswered questions, chief among them: how much will the ambitious SDG agenda cost, and can countries afford it?

This post addresses these questions by summarising the findings of a recent Overseas Development Institute (ODI) report that calculates the cost and affordability of achieving three key SDG targets – ending extreme poverty, attaining universal primary health care, and attaining universal secondary school completion by 2030 – on a country by country basis.

How much will the SDGs cost?

In August 2014, an UN Intergovernmental Committee of Experts estimated the total cost of the SDGs to be “trillions of dollars a year”. While this provides an indicative global estimate, it does not directly translate into how much the SDGs will cost in each country or whether they are affordable.

The ODI report sheds light on this by focusing on three key SDG targets that will rely heavily on public expenditure. The report examines developing countries that have populations over one million people and at least one per cent of their populations living in extreme poverty.

The total cost for the SDG targets related to poverty, health and education is estimated to be US$148 billion a year in low income countries alone. This is based upon the total poverty gap in each country, which is the amount of money required to bring all poor people above the extreme poverty line, as well as health and education costing data sourced from Chatham House and UNESCO respectively.

The chart below shows the annual per person costs on a country by country basis for low and lower middle income countries. Unsurprisingly, the cost of ending poverty is highest in poorer countries (blue area). Education and health costs (green and orange areas respectively) tend to rise as countries get richer.

Cost of poverty, health and education SDG targets in LICs and LMICs

Countries ranked by GNI per person (Atlas Method) from left to right. The underlying data for the figures included in this post is available for download here [xlsx].

To place these figures in context, in some countries, such as the Democratic Republic of Congo, the cost of reaching these SDG targets is almost as much as their GDP. This draws into question the affordability of these goals for the poorest countries in the world.

Can developing countries afford them?

To determine the affordability of the targets, the costs outlined above are compared to the amount of public finance (both government revenue and aid) available. In our analysis it is assumed that only public finance will be drawn on, as this is typically the case for providing cash transfers to those in extreme poverty, as well as health and education services to those currently missing out.

A key assumption is that only half of potential government revenue and aid would be directed to achieving these three SDG targets. This is based on the fact that public finance is spent on a range of other sectors such as infrastructure and security.

This costing exercise produces three key findings. First, almost all lower middle income countries (LMICs) can meet the costs of these three SDGs. If potential government revenue is attained, aid would not be needed in most LMICs to finance these SDG targets, as can be seen in the chart below. 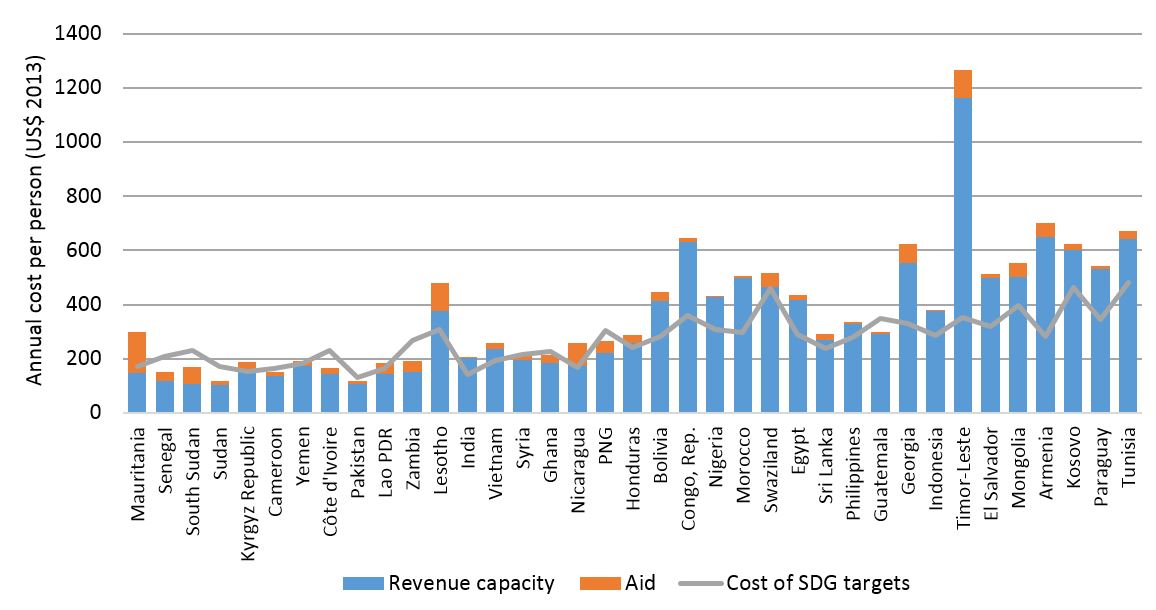 Second, effectively all low income countries (LICs) can’t afford these three SDG targets. Relying on mobilising greater government revenue alongside existing levels of aid to LICs will not be enough. This can be seen in the chart below. Collectively the total financing gap in low income countries is over US$70 billion annually. 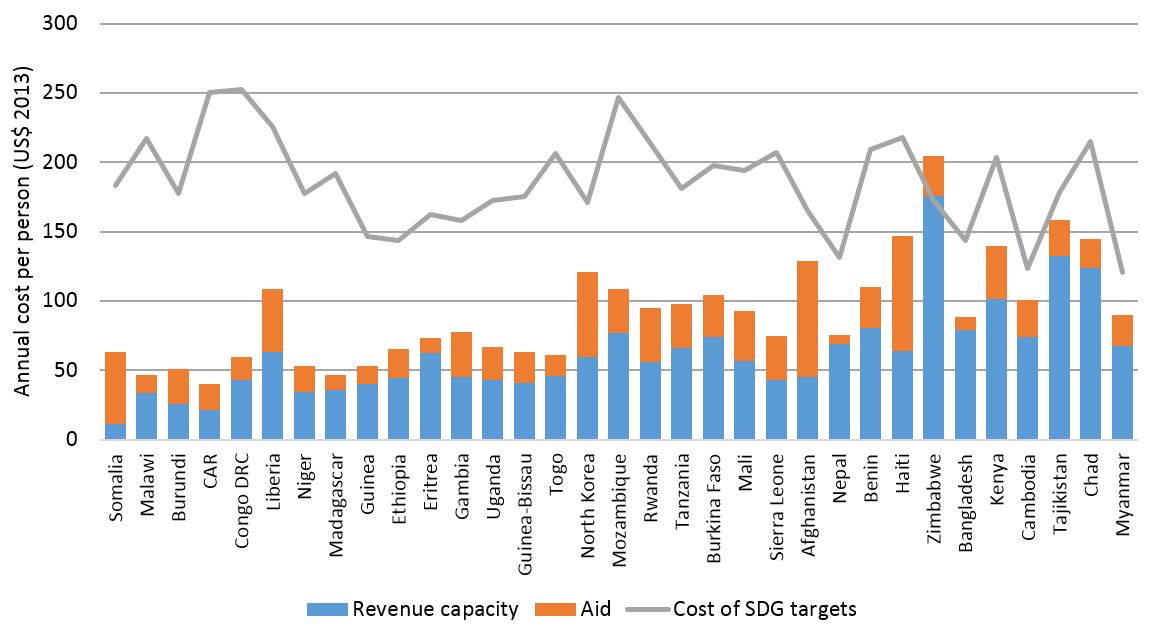 Finally, there is enough ‘surplus’ aid in LMICs to close half the financing gap in countries that can’t afford these SDGs (largely LICs). In other words, if donors redistributed aid from LMICs to LICs, theoretically there would be enough public finance available for most countries to afford these SDG targets.

These findings clearly illustrate that greater efforts are needed to assist low income countries to achieve these key SDG targets by 2030. Given that public finance will carry the burden of the costs for these targets, additional aid will have an important role to play in filling the financing gap. A key recommendation that emerges from the analysis is that donors should commit to providing at least 50 per cent of their aid budgets to least developed countries (LDCs). Currently donors only provide, on average, around 30 per cent of their aid budgets to LDCs. According to the latest OECD data, Australia gave less than a quarter of its aid budget to LDCs, ranking 24th out of 29th among DAC donors on this measure.

The Overseas Development Institute will be presenting on this topic at the 2016 Australasian Aid Conference; find out more about the conference here.