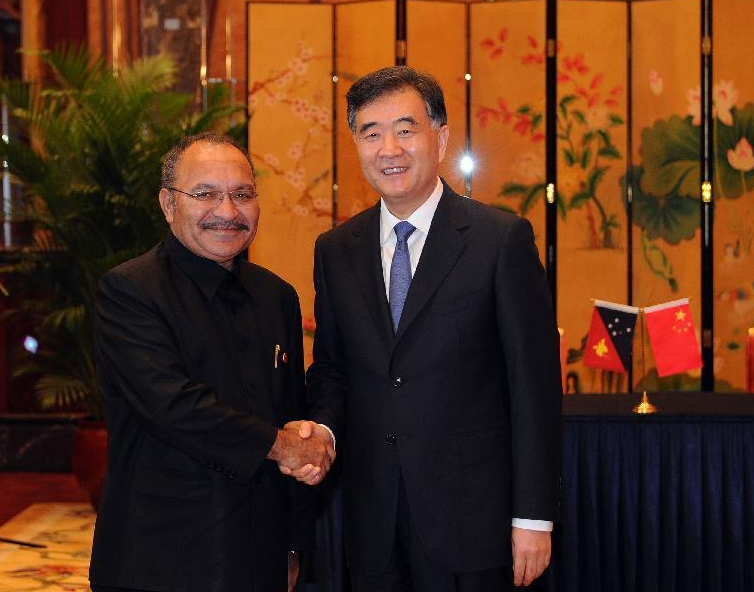 Earlier this week, Chinese Vice Premier Wang Yang pledged increased assistance to eight Pacific island countries at the 2nd China-Pacific Islands Countries Economic Development and Cooperation Forum in Guangzhou. There were similarities with the first such forum held seven years ago in Nadi, Fiji. Both forums were attended by leaders from China and the Pacific. Both saw a commitment by China to increase trade and share expertise in areas such as healthcare, education, tourism and disaster relief. And both meetings saw a substantial commitment to concessional loans for infrastructure development.

What was new in the latest meeting?

The majority of these announcements are to be welcomed. The commitment to grant 95% of commodities from least developed Pacific island countries tariff-free entry into China builds on a vague promise in 2006 to abolish tariffs on the majority of exports from these countries. The pledge to boost Chinese tourism to the Pacific through promotion and bilateral aviation agreements is exciting, as it has the potential to diversify and expand the tourism base of Pacific island countries. Most countries in the region are overly reliant on Australia and New Zealand as source countries for tourism.

Concessional finance forms the most important announcement at the forum, as in 2006. The Chinese Government has stated that these new loans will be used to “fund big productive, infrastructure and public welfare projects”. This is a broad ambit, to say the least, and raises questions about what exactly such loans will be used for. The lack of detail about these loans is consistent with previous Chinese assistance to the region. In the past, even loan contracts between Pacific island countries and China EXIM Bank have been vague, stating that disputes are to be settled in “a friendly manner” without providing details about arbitration that would normally be included in a loan agreement.

We can probably expect much the same approach to lending for these new loans. EXIM Bank loans to the Pacific have been used to fund both productive as well as less productive infrastructure, ranging from investment in roads, government communication systems, and ports, to government buildings. There has typically been limited economic analysis of such projects. Funding of ongoing costs related to operation and maintenance of infrastructure has also not been considered. This has resulted in the rapid deterioration of infrastructure – a topic discussed previously on this webpage.

The controversial nature of some past loans in the Pacific highlights a key challenge for China. The Chinese aid program is avowedly apolitical, and is often said to reflect the wishes of Pacific island governments. However government priorities are by their very nature political. Loans can become controversial as a result. This was evident recently in Vanuatu, when a new government sought to modify the previous government’s request for a grant for the Pacific’s largest convention centre. Similarly in Tonga, the use of an EXIM Bank loan to fund an extension of the Royal Palace resulted in considerable criticism. The loan had been approved by parliament for reconstruction work in Nuku’alofa.

Debt: The elephant in the room

Also significant at the China-Pacific Forum is what was not announced. A number of Pacific island delegates attended with an expectation that debt forgiveness would be on the table. It was not. In fact, debt was the elephant in the room at the forum. Several Pacific island governments are struggling with record debt, and have established “no new loans policies” to deal with the issue (see budget statements for Tonga and Samoa). For these countries, there is unlikely to be any benefit from the new loans announced by China. Whether the full amount of $1 billion is actually lent by China is also uncertain, given limited absorptive capacity in the region.

Even the ability of some countries to repay existing loans is questionable. In Tonga, government debt is currently 43 percent of GDP, the majority of which is external debt (39% of GDP). Loans from EXIM Bank account for 64% of this debt stock. The denomination of such loans in Chinese RMB creates considerable foreign exchange risk for the Tongan Government. The IMF had until recently labelled Tonga as being at high risk [pdf] of external debt distress. This has now changed due to a slight improvement in Tonga’s CPIA scores (which is another story, worth greater attention)[2]. But debt remains a significant burden for the Tongan economy.

The failure to discuss debt at the China-Pacific Forum represents a missed opportunity. It makes planning difficult for Pacific island governments with high debt levels. Looking again at Tonga, repayments of its EXIM Bank loans were to have begun this financial year, and would have risen to over 17 percent of government revenue in 2014-15. China agreed to defer repayments at the last minute, although there was lack of clarity among both the public and Tongan Government regarding exactly for how long repayments had been deferred. Sources close to the discussions have informed us that repayments have been deferred for 5 years, but that the maturity of the loan does not change. This would mean that repayments will be larger still when they start in 2018. The future fiscal position of government therefore remains uncertain.

In other countries, the issue of debt is likely to become increasingly important as up to $1 billion US dollars in concessional finance is made available (together with up to $1 billion US dollars in commercial loans). There are likely to be more and more calls for debt relief, mirroring what has occurred recently in Tonga (and as raised by this paper [pdf] from the Pacific Institute of Public Policy). Like it or not, the Chinese Government will be forced to address such issues in the coming years. It could make a start now by being more pro-active in ensuring that agents such as EXIM Bank lend responsibly, and operate transparently. For their part, Pacific island governments will need to be cautious when taking on new debt.

[1] The Chinese Government outcome statement is available here (in Chinese). The English press release can be found here. Media reports are available here, here, and here.

[2] Tragically, and somewhat perversely, the improvement in governance (measured by CPIA) means that Tonga is no longer eligible for 100% grant-based budget support from the World Bank. Future budget support will come in the form of loans and grants, placing additional fiscal strain on the Tongan Government.

Philippa Brant is a former Research Associate at the Lowy Institute for International Policy. Her research interests include Chinese aid, development in the Asia-Pacific region, and China as a global actor. She wrote her Ph.D. at The University of Melbourne investigating China’s foreign aid program and its implications for the global development system, including a focus on the South Pacific region. As an inaugural Prime Minister’s Australia Asia Endeavour Award holder (2010-2011), Philippa worked in Beijing as a Visiting Scholar at the International Poverty Reduction Centre in China (IPRCC) and an intern in the Health and Nutrition Division at UNICEF China.