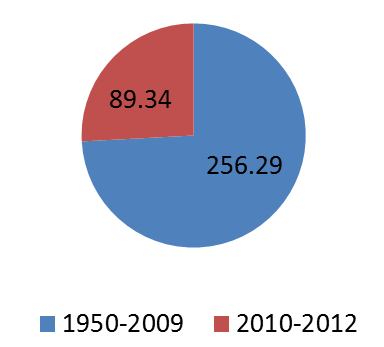 On 10 July, China’s Information Office of the State Council released its second White Paper on Foreign Aid [in Mandarin], which has been long-expected since last year (see initial analysis from Devpolicy here). The document comes at the right time. As the rapid growth of Chinese foreign aid has attracted increasing international attention, this new white paper, together with the first white paper [in English] released in April 2011, provide much needed information about Chinese foreign aid.

What is this white paper about?

I need to caution here that, while the second white paper focuses on a three-year period, the first white paper covers a much longer time frame without disaggregating data into shorter periods, making exact comparison difficult. Some analysts argue that the official figures on Chinese aid in 2010–2012 are surprisingly low. But even if the official figures are low compared to these recent estimates and speculations, they are still high compared to Chinese aid in 1950–2009. And what is certain, as articulated by the white papers, is that Chinese foreign aid has maintained a growing momentum in recent years. For instance, in 2004–2009, the annual increase of Chinese foreign aid averaged 29.4%.

In 2010–2012, there was a big increase in concessional loans, which accounted for over half of Chinese aid in total, and a big fall in interest-free loans, which accounted for less than 10% (Figure 2). Grants focus on building medium and small projects for social welfare, human resources development, technical cooperation, assistance in kind and humanitarian aid. Interest-free loans are used to construct public facilities and conduct livelihood-related projects. Concessional loans are mainly used to conduct productive projects, large and medium-sized infrastructure, or provide complete plants, mechanical and electrical products. 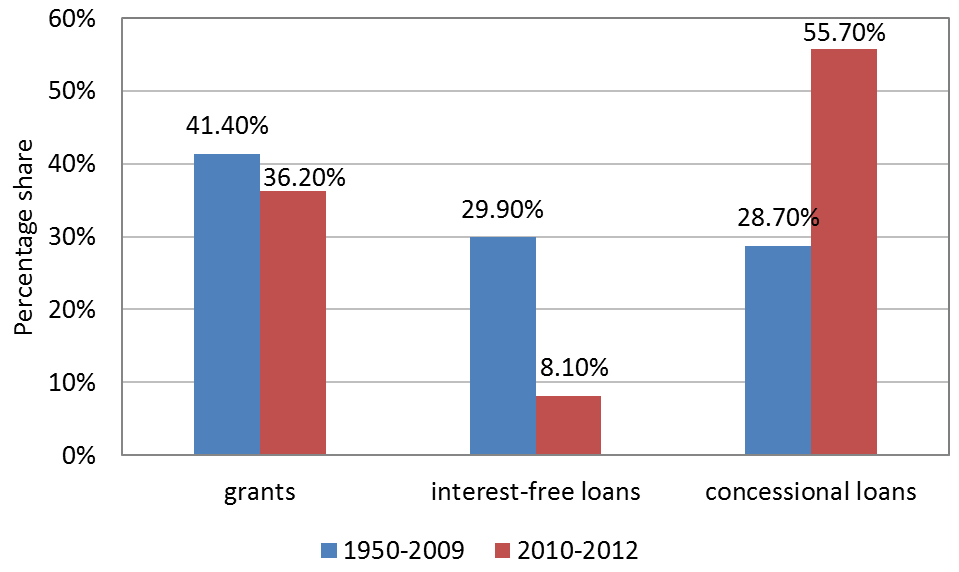 Africa and Asia as the main focus

In 2010–2012, China provided aid to 121 countries, including 30 in Asia, 51 in Africa, 9 in Oceania, 19 in Latin America and the Caribbean, and 12 in Europe. Africa and Asia continued to be the two largest recipients of Chinese foreign aid. Aid to Africa accounted for over half of Chinese aid in the period. Aid to Asia accounted for nearly one third of the total. The consistency of Africa and Asia as top priorities in Chinese foreign aid highlights the growing significance of these regions to China from both political and economic perspectives. Africa has provided China with a great deal of support in the international arena and is regarded as a reliable strategic partner. Africa also has rich natural resources and a huge market, which is much needed by China. During his African trip in May 2014, Chinese Premier Li Keqiang pledged more aid to Africa by increasing Chinese concessional loans to Africa from US$20 billion to US$30 billion. Similarly, besides promoting local economic development, China’s aid to Asian countries facilitates its economic activities in the region and serves Chinese diplomatic interests in the neighbourhood. Compared with Chinese aid in 1950–2009, the proportion of Chinese aid to other regions, including Latin America and the Caribbean, Oceania and Europe, remain small in percentage. 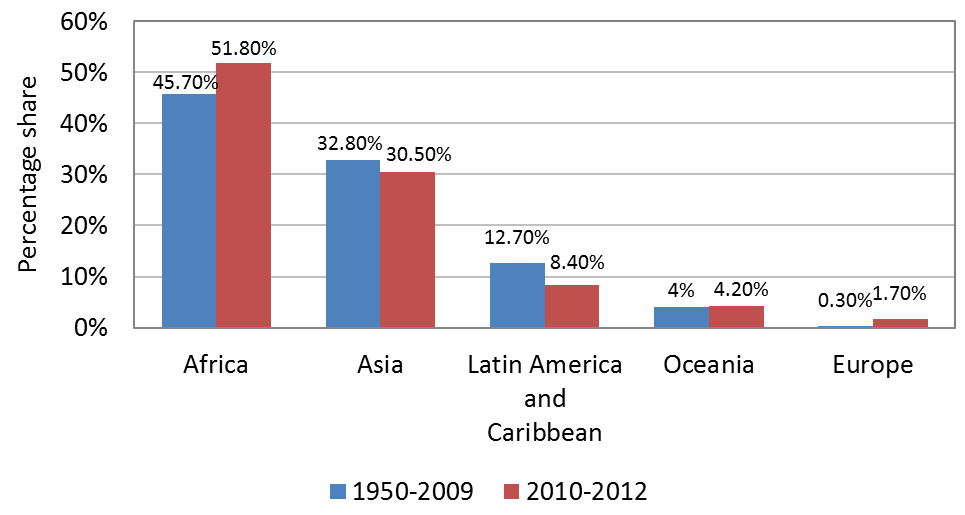 Compared with Chinese aid in 1950–2009, in 2010–2012 China offered foreign aid in quite similar forms, including complete projects, goods and materials, technical cooperation, human resources development cooperation, dispatch of medical teams, volunteer programs, emergency humanitarian aid and debt relief. However, the numbers of aid projects in most of these forms experienced a considerable increase. 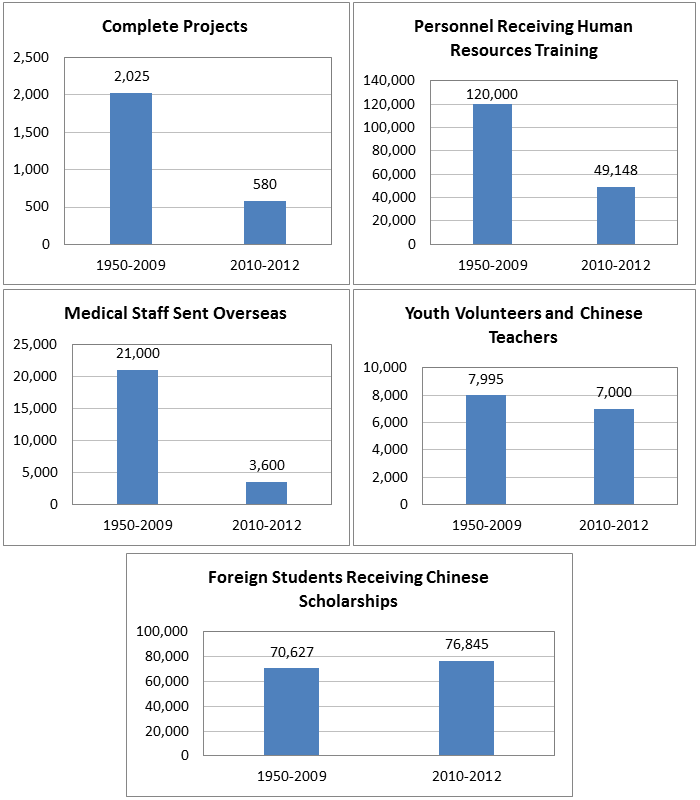 China has actively provided support to multilateral development organisations. In 2010–2012, China donated about 1.76 billion yuan to organisations such as the United Nations Development Program, the United Nations Industrial Development Organisation, and the United Nations Population Fund to promote development in the areas of poverty reduction, food security and trade in other developing countries. China has also strengthened its dialogues on aid policies and practices with traditional donors, such as the United Kingdom, Australia and Switzerland. In addition, China has been conducting a growing number of trilateral aid cooperation programs on a pilot basis. For instance, China and the UNDP successfully conducted a trilateral aid cooperation on cassava cultivation in Cambodia and is currently working on the promotion of cassava export in Cambodia. In March 2012, China signed a Funds-in-Trust Agreement with UNESCO to support educational infrastructure in Africa. In August 2012, China and New Zealand reached an agreement on conducting their first trilateral project on the improvement of water supply in the Cook Islands.

Message between the lines

There is much improvement in this second white paper compared with that released in 2011. More detail is provided on each category of Chinese aid, including agriculture, education and public health. The release of this second paper itself indicates more openness from China in foreign aid in recent years. Moreover, China has signalled a reater willingness to conduct international development cooperation through trilateral cooperation. In addition to Chinese trilateral cooperation in Cambodia and the Cook Islands, China is conducting trilateral cooperation projects with traditional donors such as the United Kingdom and the United States. In April 2013, China and Australia signed a memorandum of understanding on development cooperation. The two countries are conducting their first trilateral project on malaria research and prevention in Papua New Guinea. China’s increasing engagement in trilateral cooperation is encouraging news at a time when the international aid regime is facing growing uncertainty with the rise of (re)emerging donors. Trilateral cooperation has the potential to bridge South-South and North-South cooperation, which serves the interests of traditional, (re)emerging donors and recipient countries.

On the other hand, what remains missing in the new white paper is information on Chinese aid to individual recipient countries, disaggregated data in short periods and a forward looking strategy. More information in this regard will produce a better understanding of Chinese foreign aid and reduce suspicions. Based on the trend indicated in the white papers, we can expect that in the future, or the near future at least, Chinese foreign aid will continue to grow quickly, along with the Chinese economy. China will continue to frame its aid within South-South cooperation. Africa and Asia will continue to dominate the Chinese foreign aid landscape, and China will demonstrate more enthusiasm for cooperation with traditional donors on a gradual basis: ‘cross the river by feeling the stones’ is always a popular philosophy in China. What we need is more patience.

Denghua Zhang is a PhD Candidate in the College of Asia and the Pacific, ANU.