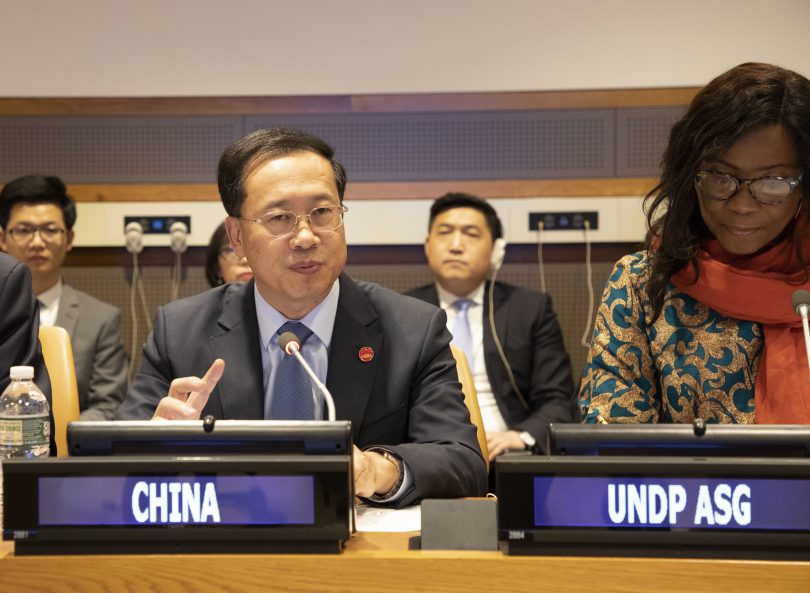 China at UNDP headquarters in New York in 2018 (UNDP/Flickr)

The main dataset used in the paper is AidData’s Global Chinese Development Finance Dataset. It tracks all known overseas official Chinese finance from 2000 to 2014, including aid and non-concessional official financing. The authors undertook a heroic effort to bring together and standardise data from: Chinese ministries, embassies, and economic and commercial counsellor offices; aid and debt management systems of finance and planning ministries in recipient countries; English, Chinese and local language news reports; and case studies from researchers and NGOs. The dataset covers 4,303 projects worth around US$354 billion, and distinguishes between different types of Chinese official financing – for example, ODA-like, or other official financing which is not concessional enough to qualify as ODA or is geared towards trade.

The question of whether foreign aid helps or hinders economic growth in recipient countries is one with a rich history of debate in the popular press and research community. It is not an easy question to answer. We actually don’t know much about what causes growth in general, let alone the effects of some other factor like foreign aid – at best a minor contributor in the grand scheme of things. Much of the empirical research on national-level economic growth, in particular cross-country growth regressions, has for good reason fallen out of favour in the research community. Convincingly measuring the causal effect of anything, including aid and at the country level, is also hard.

Making the task even more difficult, aid comes in different forms, meaning it will be challenging to figure out the overall effect on average because different types of aid likely have different effects over different time horizons. Aid is also not given randomly, meaning it flows to countries more or less likely to grow regardless of the aid.

For the interested reader, my two favourite papers which convincingly address these problems are the one by Michael Clemens, Steven Radelet, Rikhil Bhavnani and Samuel Bazzi (2011), which focuses on the timing and type of aid; and the one by Sebastian Galiani, Stephen Knack, Lixin Colin Xu and Ben Zou (2017), which compares the effects of aid around eligibility cut-offs. There you will see just how far good researchers go to address these important concerns.

In the new paper, to get around the problem that faster growing countries might attract more aid, the authors use China’s steel production as an instrument (or proxy) for total aid (the argument being that China gives more aid when it has a surplus of domestic production); multiply it by the probability of being a Chinese aid recipient, which is determined historically; and look at whether the product of the two affects Chinese development finance commitments, economic growth, and economic growth through Chinese development finance commitments. All are arguably needed for such a strategy to be convincing. China’s foreign exchange reserves (multiplied by the probability of being a Chinese aid recipient) is used as a second instrument, based on similar logic.

The main finding is that Chinese aid (but not non-concessional official finance) boosts short-run economic growth. An additional project – specifically, an average, representative project – increases growth by between 0.41 and 1.49 percentage points two years after commitment.

The authors also look at Western aid, using total aid and the probability of receiving it as the instrument. Similarly positive results are found with OECD aid as a whole, and for US aid, but not for World Bank loans.

Interestingly, whether looking at China or the West, the positive results are only found for aid (ODA), and not for non-concessional official financing. The authors find that the growth effects do not depend on recipient country institutions, and that the main channel appears to be investment and, to a lesser extent, consumption – two very traditional economic mechanisms. The study finds no evidence that Western aid is less effective in countries receiving lots of Chinese aid.

The study doesn’t answer all the questions it raises. It isn’t clear why non-concessional financing is less effective than concessional. Or what about World Bank projects makes them non-growth promoting. As the authors themselves note in the paper, their exclusive focus is on short-term growth, and there remain plenty of other concerns that could prevent Chinese aid, or Western aid for that matter, converting into higher long-term growth.

That said, however, this is another study joining the handful of those which convincingly suggest that aid can promote short-term economic growth at the national level. As one of the first serious looks at Chinese aid, this study suggests there is no reason we should think the effects of Chinese aid on economic growth are much different to any other aid.

The team responsible for the paper discussed here have also just released, through Cambridge University Press, Banking on Beijing: the Aims and Impacts of China’s Overseas Development Program, which I suspect is likely to be the authoritative reference on Chinese aid.