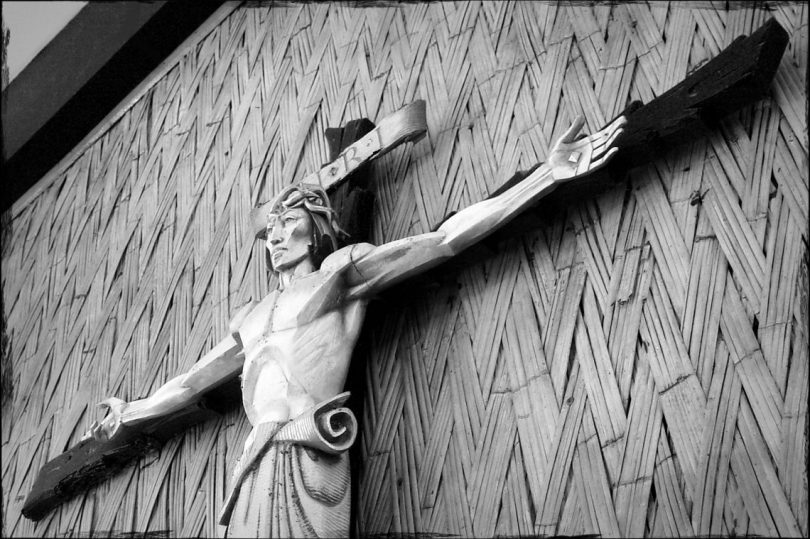 This blog reports on 14 interviews with market vendors at the main town market in Madang Province, which is located at the northern coast of the Papua New Guinea mainland. Madang Province is culturally, linguistically and environmentally diverse, extending from the central mountain ranges to the offshore islands. Participants came to the market from a range of locations within Madang Province, as well as from the Western and Eastern Highlands Provinces. Highlanders travel to Madang in search of higher prices for produce grown in cooler climates, especially broccoli, cauliflower, potatoes and sweet potatoes. Two main categories of sellers participated in this research: producers and re-sellers. Re-sellers buy produce from locations outside of Madang and/or purchase from bulk sellers at the market gate.

Interview participants were randomly selected and there was no intention to focus specifically on their religious views. Despite the small sample size, more than half of the participants referenced Christian beliefs. As this emphasis emerged inductively from the data, the authors then reflected on existing literature related to faith-based approaches to sustainability in the Pacific to inform the analysis.

The interviews reveal an acute awareness of environmental change among market sellers, such as rising temperatures, changes in rainfall patterns and unpredictable seasons. These changes are perceived to affect the quality of fruit and vegetable produce. As two market sellers said:

…market vendors talk about it together. The quality of the food has changed, and we discuss this. It’s really hot.

…the continuous rain makes it so we don’t harvest properly. It affects how we make gardens… [There is] not enough sunlight. Continuous rain and then [a] period of no rain.

The interviews also uncover unique interpretations of the cause of these changes. In contrast to anthropogenic greenhouse gas emissions emphasised in international climate change discourse, many interviewees associated environmental change with spirituality or Christian beliefs. This was primarily interpreted with reference to the “Last Days” or “End Times”, and the second coming of Christ. Here are some representative responses:

… I’m thinking it is the end of the world and God will come. Big man ba come [big man [God or Jesus] will return]. The world is ending – that is why the climate is changing. The only person with control of this is God.

…it’s the Creator himself that brings these changes. I can try my best to change it but I can’t. Everything happens according to God’s will.

While more research is needed to see how widespread these views are, we know that this is a perception shared among other Pacific island countries, such as Tuvalu, Fiji, and in Tonga, where it appears to be widely believed that only God can reverse the impacts of climate change and natural hazards because He created this universe.

The primary responses to the changes observed by the participants in this study are to attend church and reflect upon their personal relationship with God. If they have a good relationship with God, it is thought that their garden will be blessed and result in a good and healthy harvest.

…food is growing well because God blesses the garden. If you have a good relationship with God, it will grow well. (Participant 6)

…to avoid it, we should continue to go to church and worship God – if we do that we will go to heaven. (Participants 12 & 13)

…media people talk about it. I don’t think anyone on earth can change this. We try to create awareness, but the decision has been made. We can talk about it, but we are getting to the end of the world. (Participant 4)

This appears to give rise to a fatalistic view of climate change, as “God alone” is seen to be in control. Yet in apparent contradiction to this, most participants expressed interest in increasing their knowledge about climate change and potential adaptation strategies.

A clear implication of this research is that climate science needs to be delivered in PNG in ways that are respectful to Christian (and other) belief systems. Such activities could see a collaboration between Christian churches, community leaders and climate science experts. They would need to be centred on notions of stewardship and creation care in Church communities, and improving and increasing dialogue between climate scientists and religious communities through participatory and collaborative research processes. They would need to incorporate not only climate science knowledge, but also Christianity and local, indigenous knowledge.

In summary, sustainability practitioners working in PNG need to integrate environmental information with Christian beliefs. This integration could increase local participation in discussions on climate change, increase understanding on climate change and its effects, and help discover sustainable ways to address climate change issues with respect to indigenous people’s beliefs.

This blog is based on a forthcoming book chapter.

Lorelle Tekopiri Yakam is a Graduate Researcher in the Centre for Social Research at Divine Word University.