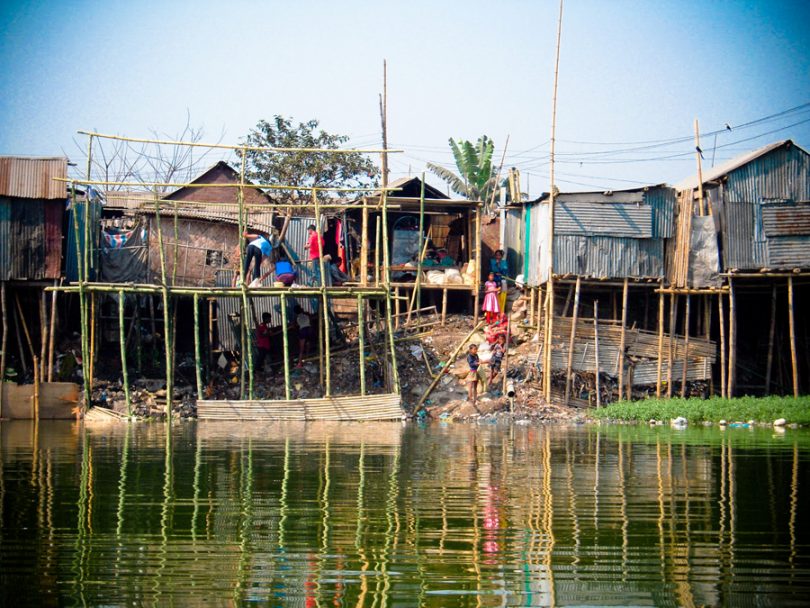 A recent visit to Bangladesh offered the perfect vantage point from which to observe the climate debates underway elsewhere, Davos featuring most prominently among them. I spent a week in this populous south Asian nation, leading a delegation of Australian federal parliamentarians to see firsthand the positive impact of Australian aid.

To hear United States President Donald Trump dismissing as unnecessarily pessimistic, “prophets of doom”, those agitating for urgent, meaningful action to mitigate the effects of global climate change – including children – in his Davos speech, was simultaneously jarring and informative.

From a man many would view as the embodiment of entitled privilege, these comments underscored the chasm separating the group of elites, some have labelled the “Davoisie”, and those, generally in poorer, developing nations, but increasingly in rich countries like Australia too, who each day, have to grapple with the very real impacts of climate change.

While definitely a headline item at gatherings like Davos, the discussions around climate change were centred on the direct threats it posed to those in the room – primarily big business and government.

For these ‘haves’ or “MarketWorlders” to use a term coined by TIME Magazine Editor-at-large Anand Giridharadas in his book Winners Take All, the debate remains largely economic, primarily framed around questions of how to act on climate change while ensuring minimal adverse effects on profit; or among the more optimistic, questions of how to boost profit by identifying new revenue streams in a carbon-constrained operating environment. Seen in this light, ethical investment and sustainable business practice are exercises in financial and reputational risk management first and foremost.

At Davos, the increasing trend to ethical investment and the taxation of the planet’s wealthiest individuals and corporations were prominent points of discussion. These are issues of the utmost importance to be sure. Any effective long-term global response to climate change will require a significant economic underpinning along with a genuine commitment to meaningful action from the richest and most powerful.

Sadly, however, the people of Bangladesh do not enjoy the time and luxury of such high-powered hand-wringing. The doomsday scenario so blithely dismissed a world away is staring them squarely in the face.

A country of 165 million people with a land mass two-thirds the size of Victoria – of which 80 per cent is effectively a floodplain – it bears the unwelcome distinction of being one of those nations at the existential pointy end of the climate emergency.

As sea levels rise and more water flows down the country’s many rivers due to ice melts in the Himalayas; and as cyclones in the Bay of Bengal become more severe, flooding in this already very flood-prone part of the world will only increase.

For just as long the people who have lived in the fertile Ganges Delta have accepted the dangers and destruction from floods and cyclones that occur in this region as the quid pro quo of benefitting from the rich agricultural lands and access to coastal trade routes. The damage wrought by these events now, however, is permanent.

The social and economic effects of climate change are already significant and highly visible and will be devastating not only to Bangladesh but the broader region if allowed to continue.

Displacement is a major issue and becoming more so. Many Bangladeshis impacted by these environmental changes in other parts of the country are moving to the capital, Dhaka, already one of the most densely populated megacities in the world.

This teeming city struggles to cope with the current influx and the slums are already home to 40 per cent of the population. According to the International Organization for Migration, up to 70 per cent of the slums’ residents are effectively environmental refugees. Basic public services like education and health care are stretched. Sewage runs freely and diseases spread quickly in impossibly cramped conditions.

Amidst all this, Australian aid is delivering valuable education, health and nutrition programs in these areas that are making a real difference in the lives of some of the most disadvantaged children and families on earth. However, what was also very clear was that, unchecked, the impacts of climate change will render these small but significant changes irrelevant.

In the wake of this summer’s devastating bushfires, there were suggestions in the international press that climate change could make Australia unliveable.

Without detracting from the significance of the long-term challenges that Australia faces, this is an unlikely scenario. As a wealthy country and with the necessary political will, it has the resources at its disposal to invest in significant action to reduce impacts and build resilience.

This, unfortunately, is not the case for a country like Bangladesh, already grappling with a major crisis and facing dire predictions. World Bank forecasts show that without drastic and far-reaching action, its rate of climate-driven internal displacement will increase to the tens of millions by 2050. The climate emergency is a global challenge. Bangladesh can do a lot, with our support, to build the resilience of its citizens, but it cannot prevent drastic impacts alone. For that, the global community must band together to accelerate the shift to a low-carbon future.

To those who see such gatherings as further evidence of the self-serving, navel-gazing tendencies of the world’s elite, the denizens of Davos can at times appear easy targets. However, the recent tendency to unilateralism and populist national self-interest – approaches shown to further marginalise those already disadvantaged – underlines the importance of such forums and contributions from the elites including Jeff Bezos.

As an organisation which works to protect the safety and interests of children the world over, including in conflict and disaster, we see the awful toll wrought by such events, compounded by the effects of climate change. This is why we’re committed to integrating climate action into all our endeavours, thus doing our part to ensure the life-saving work we do in places like Bangladesh and elsewhere is not derailed by climate change.

Collective and meaningful action from government, business and yes, the international non-government organisation – or aid – sector, remains the best way forward. We owe it to those in places like Bangladesh not to surrender to narrow self-interest.

What they’re experiencing may appear distant and alien to some, but sooner or later, it’s a reality we’ll all have to face.