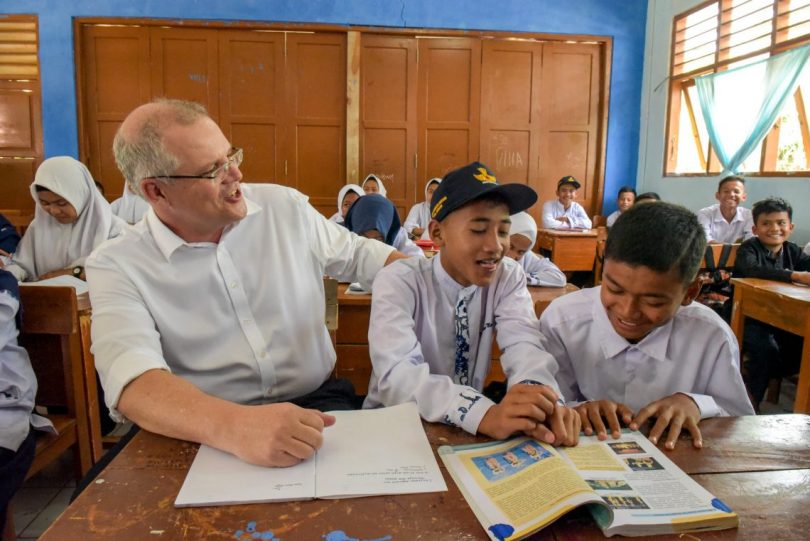 During the first term of the current Coalition government, aid was slashed. Adjusting for inflation, and expressed in today’s prices, aid in 2012-13, the last fiscal year before the Coalition came to power, was $5.5 billion. By 2015-16, it was $4.5 billion. In the second term, there were further smaller cuts, and by 2019-20, aid was budgeted at $4.1 billion in current prices. It was scheduled to fall further in 2020-21 to around $4 billion.

There is obviously a long way to go before the Coalition returns aid to the $5 billion plus level it enjoyed under Labor, and there is no guarantee that it will do so. Certainly, the government seems to be hosing down expectations, referring to the new aid initiatives as “temporary and targeted”. Indeed, the government, perhaps worried about attacks from the likes of One Nation that charity should begin and end at home, seems to be hoping that no one will notice the aid increases. Hence the lack of any estimate of what the aid spend will actually be this year.

The government’s nothing-happening-here stance notwithstanding, the aid increase is in fact very significant, for three reasons.

First, whatever happens in future years, there is no getting away from the fact that the government has markedly increased the aid spend this year. Moreover, for all the “temporary and targeted” talk, it is very difficult to believe that the government will want to endure the international reputational damage of cutting aid in the next few years, which will undoubtedly be ones of global hardship. If so, then the government seems to have locked in some additional $400 million of aid funding annually.

Second, the government has at last started increasing aid to Southeast Asia. For years, it has tried to reconcile its commitment to cut aid and step up in the Pacific by slashing aid outside of the Pacific: first to Africa, and then to Asia. The Prime Minister’s 14 November announcement of an additional four-year $485 million for Southeast Asia (of which we are estimating that $360 million will be counted as aid) is the first recognition of the validity of the criticism many have made, including myself, that this is a self-defeating path. At last, the government seems to be taking aid to Southeast Asia seriously, rather than as an optional extra.

Third, it is quite possible that we will see further increases in the years to come. The global and regional economic pain associated with COVID-19 is set to rise not fall, as will strategic competition with China – not only in the Pacific, but also in Southeast Asia.

One generalisation that can be made about Australian aid is that incoming governments tend to initially cut it, and then a few years later start increasing it. It would seem that, when elected, governments are focused on the fiscal deficit and economic performance, but that, in later years, the regional and global stage looms larger. This pattern of cutting and then increasing aid was true of the Hawke/Keating, Fraser and Howard governments. And now it may be true of the Abbott/Turnbull/Morrison government.

The table below shows how the estimate of a $4.4 billion aid spend for the current year is arrived at. First, there is what the government refers to as a core budget of $4 billion. The October aid budget also included an additional $211.3 million in COVID-related aid funding, mainly for the Pacific and Timor-Leste. Then shortly after the budget, two more announcements of additional aid  were made. As per its press release of 31 October, the government will spend $500 million in support of COVID-19 vaccine access in the Pacific and Southeast Asia. All of this will be aid. The 2020-21 MYEFO, released on 17 December, indicates how much will be spent in 2020-21. Finally, as mentioned earlier, on 14 November, the Prime Minister announced a four-year $485 million package of support for Southeast Asia. It is not clear how much of this will be counted as aid (or ODA – Official Development Assistance, to use the proper terminology). The content of the initiative suggests that most of it is ODA: support for economic integration and development; infrastructure assistance; and so on. $361 million of the $485 million will be spent by DFAT. We assume that this is the ODA share of the total package, and apply it to the annual estimates provided for spending under the total package in the 2020-21 MYEFO.

Note: Items 2 and 3 include the small departmental amounts allocated to these aid announcements.

While there is some uncertainty about the final element (relating to the 14 November package), it only amounts to $40 million in the current year. More serious uncertainties relate to the whether the government can get the larger additional amounts announced for this year (the $202 and $175 million) out the door before the end of the fiscal year. If not, that will lead to further aid increases next year.