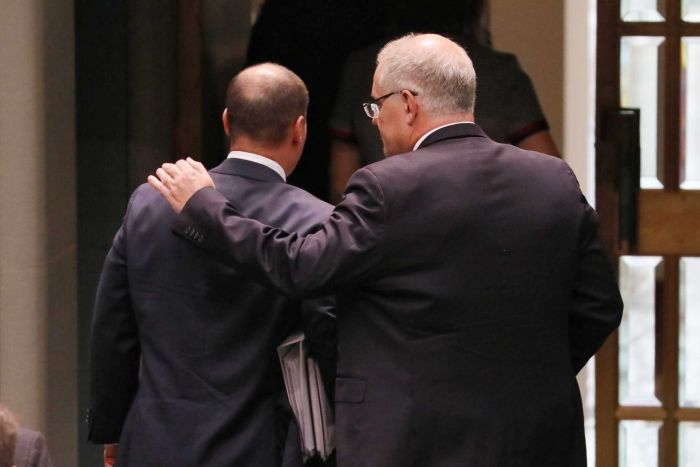 In March 2013, former Liberal Finance Minister Nick Minchin “re-entered the political fray” as The Australian reported it, sympathetically of course, and made the fiscal case for aid cuts, arguing: “At the moment, because the government is in deficit, we are borrowing money overseas… [W]e’re going to be sending that money back overseas to other countries – it is quite a silly position to be in.”

Ever since, the Coalition has used the deficit as an argument, first, to avoid growth in foreign aid, and then to cut it. At today’s prices, the aid program was at $5.5 billion when the Coalition came to power, but now languishes at, and is soon to fall below, $4 billion. After inflation, aid has been slashed by 27% from the last Labor budget of 2012-13 to the latest budget handed down last night. 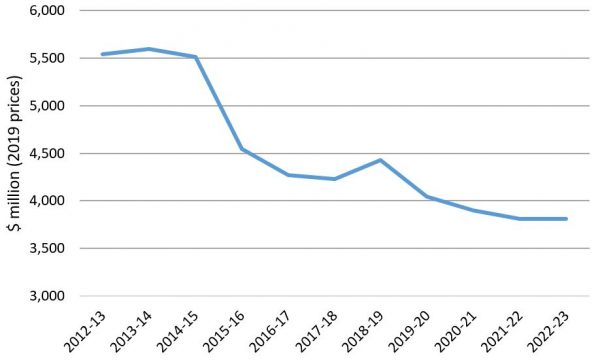 If the deficit meant that aid should be cut, then the surplus achieved in the 2019 budget should allow it to grow. There is also the new PM, who in his maiden parliamentary speech characterised global poverty as “a true moral crisis that eclipses all others.” More recently in 2017, Scott Morrison spoke of Australia as a “compassionate nation” and said that he “look[ed] forward to the day when we can be more generous” with our aid.

That day, evidently, is 2022-23, and even then, not really, since the paltry increase of 2.5% budgeted in the last year of the forward estimates will only keep pace with inflation. But at least it was an increase. At least an end, however far off, to the aid cuts was signalled. So committed has this government become to cutting aid that the aid lobby, although it has complained since the budget was handed down, put very little pressure on the government to increase aid in the run up to budget day.

The ratio of aid to GNI – which was at 0.33% in pre-Coalition days, with a bipartisan agreement to increase it to 0.5% – is now set to fall below 0.2% next year. We will then join the “0.2 club”: a group of stingy/new/crisis-prone donors, which includes, apart from the US, only European countries in or emerging from fiscal crisis – Greece, Spain and Portugal – and new donors such as Korea and Slovenia.

That will damage Australia’s standing, and in any case should lead to some national soul-searching. The more pressing problem for the government though is how, given its unwillingness to increase overall aid, it can meet its “step-up” objective of spending more aid in the Pacific. Pacific aid goes up in this budget from $1.31 billion to $1.38 billion, an increase which is offset almost exactly by reductions to East and South Asia. The cuts are spread over several countries. Aid to Pakistan is projected to fall by 35%, Nepal by 26%, Cambodia by 17%, and Indonesia by 10%.

These cuts are sizeable enough, but one needs to take a longer-term view to see the geographical transformation in Australian aid in recent years. Since 2012-13, aid to the Pacific has increased by $125 million after inflation; aid to Asia has been slashed by $690 million over the same period. Then the Indonesia program was bigger than the PNG one; now it is less than half the size. Aid to Africa and the Middle East has been even more sharply cut.

It is a sign of how the times have changed that the geographical aid allocation judgements of the 2011 Independent Review of Aid Effectiveness on which I worked now seem so archaic. Tasked with the job of recommending how to spend a massively scaled-up aid program, we recommended only a “low expansion” for most of the Pacific, due to poor performance, but a “high expansion” for both East and South Asia.

That moment in history has well and truly passed, but does it make sense to keep robbing Asian aid programs to expand Pacific ones? Asia has a bright future, but it also still has a lot of need, and instability. Aid works better in Asia – DFAT’s own data shows that. And whatever the strategic arguments for providing aid to the Pacific, they are equally strong for aid to Asia.

In fact, when discussing the need for more aid to the Pacific, the Prime Minister suggested late last year that it would come at the expense of multilaterals (“useless international club joining exercises”). There don’t in fact seem to be any cuts to multilateral organisations in this budget. Perhaps the PM didn’t want to explain why cuts to Asia would be used to fund increased aid to the Pacific.

Also embarrassing for the government is the Foreign Minister’s budget press release. It devotes six paragraphs to the Pacific and only one to Southeast Asia, in which it refers to the countries of that region as “transition[ing] from developing countries”. Not the ones that we give aid to. Take Indonesia – it will be a developing country for at least the next two decades. As I said of the country back in 2012 (and it would still be true today), “By Australian standards, just about everyone in Indonesia is poor. By Indonesian standards, almost no one in Australia is poor. Half of all Indonesians live in a house without a proper toilet. Half cook on wood or dung. Two-thirds get by without access to clean water.”

More recently, Penny Wong in her March UQ speech had some very good statistics and arguments in support of “the importance of the aid to middle income countries.” As she said, “Supporting and building the Pacific region to the detriment of other nations will not serve our relationships, our influence, and our long-term prosperity and security.”

Perhaps now it is the arguments of Pauline Hanson rather than Nick Minchin that worry the Coalition and prevent any consideration of an increase in aid, however modest. Whatever the reason, the result is incoherence. It cannot be the case that aid to the Pacific is so important that it has to keep being increased, and aid to Asia so unimportant that we should continue cutting it.

See our latest aid figures in this spreadsheet.