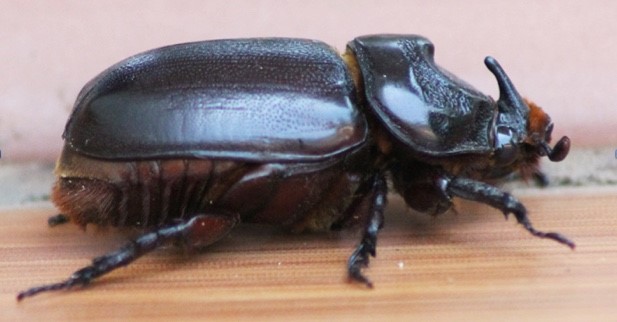 A new invasive strain of the coconut rhinoceros beetle (CRB), Oryctes rhinoceros, is present in Solomon Islands and is spreading rapidly. CRB is the most serious insect pest of coconuts, essential for food security and cash income, resulting in significant yield losses and tree mortality. It also impacts oil palm, which is significant as the Guadalcanal Plains Palm Oil Company (GPPOL) employs around 1,500 people and contributes around 12% of national GDP. CRB also damages sago palm (important for housing), and the areca palm (the producer of betel nut, problematic from a health perspective, but also important for informal sector livelihoods in Solomon Islands). The CRB strain in Solomon Islands and elsewhere in the Pacific (CRB-G) is resistant to the virus that was used to control a different strain of CRB in Fiji, Samoa and Tonga in the 1960s and 1970s (this strain, CRB-S, is also present in Western Solomon Islands).

Symptoms of CRB-G attack were first reported in Honiara in January 2015. Subsequently, CRB-G has spread along the north coast of Guadalcanal, to the nearby small island of Savo, the Ngella (Florida) grouping, and to North Malaita in perhaps the most serious outbreak beyond Guadalcanal. More recently, CRB-G has been recorded in the Russell Islands group, which is home to the largest coconut plantation in the Southern Hemisphere, South Malaita, and on Ulawa Island. It is likely that CRB-G will soon reach other islands.

Contrary to the livelihoods threat from other invasive species such as the giant African snail, the Solomon Islands Government (SIG) is aware of the scale of the threat – probably given the potential for huge economic and social impact from reduced yields of palm oil, copra, and coconut oil. GPPOL, for example, estimate that CRB will cost their business SB$40 million (AU$6.7 million) by the end of next year, or around 15–30% of turnover. GPPOL and some coconut processors have been particularly vocal around the scale of the threat to their operations and proactive in trialling management responses. SIG declared a national CRB state of emergency through 2017 that remains in place. 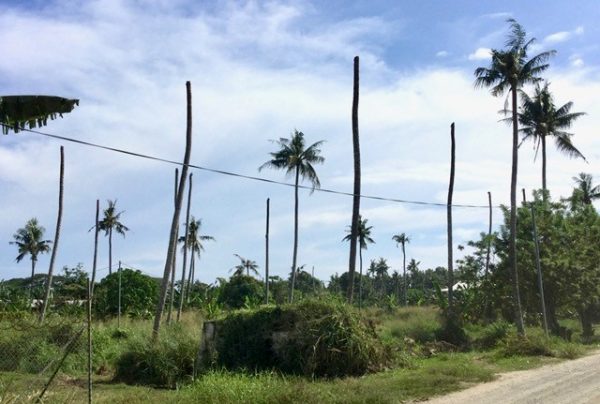 Eradication is now impossible, so the focus of efforts by Biosecurity Solomon Islands is on management. Immediate responses were hindered by the slow release of funds and a lack of coordination with the private sector. More recently, the response has improved through coordination by the Australian and New Zealand-funded Pacific Horticultural and Agricultural Market Access program (PHAMA), the establishment of a joint public and private sector CRB Taskforce, and support from various development partners. Current and planned support from Australia (PHAMA, the Strongim Bisnis program, the Solomon Islands Biosecurity Development Program and ACIAR), New Zealand (some through AgResearch and some facilitated by SPC), FAO, the EU, and the Philippines focuses on CRB surveillance and clean-up (including the destruction and removal of breeding sites like decaying logs to kill all life stages), disease studies, and awareness. SIG, through the Ministry of Agriculture and Livestock, has developed a CRB Operational Plan that provides a framework for coordination of response efforts. Communication and awareness are critical. A Facebook site – Solomon’s Farmer’s Corner – has been useful for dissemination of information and awareness. GPPOL has been particularly active in the clean-up, hiring additional workers to search out and destroy larvae while destroying breeding sites. Coconut processing businesses have provided equipment and in-kind support to the clean up effort.

What are the prospects? Certainly, CRB-G presents a very significant livelihood and economic threat to Solomon Islands. Fortunately, SIG and development partners acknowledge the issue and have now responded with support. The initial focus of management is on reducing the beetle population by destruction of breeding sites and containment. Behavioural change on the part of farmers and villagers is necessary – for example, it is now important for farmers to destroy dead/rotting palm logs wherever they are found, and manage green waste and compost. Greater inspection and controls around inter-island movement are also necessary (it is thought that the infestation in North Malaita is linked to the freight of chicken manure as organic fertiliser). Ongoing coordination by Biosecurity Solomon Islands of all of these activities is essential.

CRB-G is also present in Palau, Guam, Hawaii, PNG (Port Moresby, Central and Gulf Provinces), the Northern Mariana Islands, and Japan (Okinawa). Halting or minimising the spread of CRB-G to other parts of the Pacific, especially the atoll countries, is vital. In PNG, New Britain Palm Oil Limited is fully aware of the threat to their business – recently sending their full management team to Honiara to learn from Solomon Islands’ experience with CRB.

But more is needed. Destruction of breeding sites will reduce the population, but with previous CRB-S infestations, true long-term management was only possible following the introduction of two insect pathogens: green muscardine fungus, Metarhyzum anisopliae, and in particular the virus Oryctes nudivirus. But CRB-G is not susceptible to Oryctes nudivirus. Identifying new biocontrol agents is vital. Extensive activities are underway in Solomon Islands, PNG, Guam, Palau and Japan to identify, test, bulk-up and release a new virus. The private sector (Sime Derby from Malaysia; the parent company of GPPOL and New Britain Palm Oil Limited) has invested significantly in the discovery of a new virus in Asia and, ultimately, its bulking-up and release in PNG and Solomon Islands.

Overall, the prospect for CRB control in Solomon Islands is now improving, but considerable work is required over the coming months if even more severe consequences are to be averted. In a region where coconuts are so important to economies and communities, the CRB response in Solomon Islands has become a pilot for the region. Solomon Islands’ neighbours are watching with interest.

Andrew Piper is the Solomon Islands Country Manager for the Pacific Horticultural and Agricultural Market Access Program (PHAMA). PHAMA is an Australian and New Zealand-funded program that works with the public and private sectors to promote Pacific exports of primary and value added produce by helping exporters to meet trading partners’ regulatory requirements and quality standards. It works in Fiji, Papua New Guinea, Samoa, Solomon Islands, Tonga and Vanuatu.

Bob Macfarlane is a retired entomologist with 40+ years plant protection and biosecurity experience in the Pacific and Asian regions. In the first half of 2018 he was the first coordinator for the Solomon Islands response to the coconut rhinoceros beetle for bedding by PHAMA. He now lives in Gizo, Western Solomons.