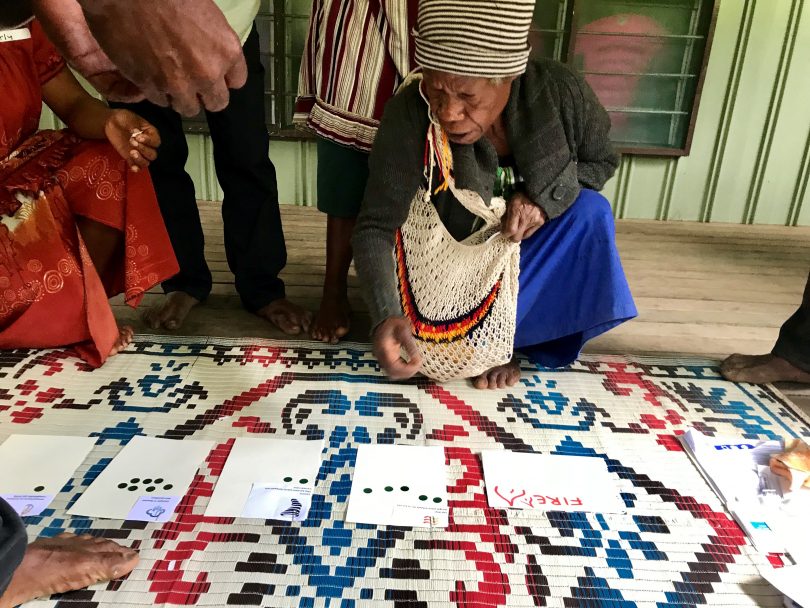 Indigenous peoples have always adapted to environmental change and there are differences in the ways that climate change is interpreted locally. This blog reports on a series of workshops conducted as part of the Engaging Communities and Government in Biodiversity Conservation and Climate Change Adaptation project. Over 190 community members and government representatives participated in the project, drawn from four communities in Madang and Eastern Highlands Provinces: Riwo, Ohu, Bundi and Hogave. The workshop process revealed the ways in which these communities are experiencing threats to biodiversity that they, in part, associate with a changing climate.

Changes in rainfall and rising temperatures were considered to be the most important climate variables. For example, residents of Ohu and Bundi reported experiencing changes in the frequency and intensity of rainfall, which have damaged the road to Madang town. An increasing number of hot days is also limiting the number of hours that women reported working in the garden. Residents of Hogave were overwhelmingly concerned about the potential for wildfires resulting from changed rainfall patterns and higher temperatures, particularly in the community forest conservation area. These changes have flow on effects to food security, human health and ecosystem health and function (Table 1). 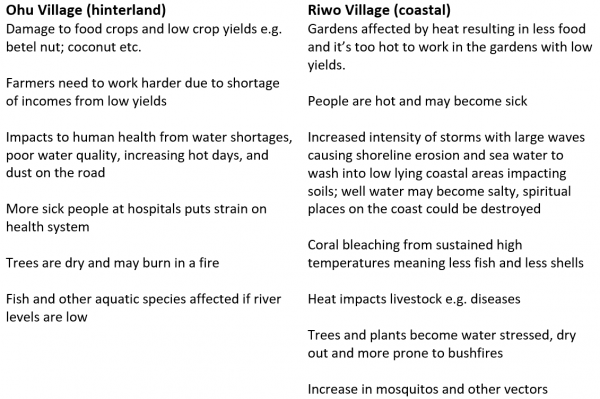 It was clear throughout the workshops that women and children are most disadvantaged by local environmental change. Female workshop participants were often most vocal about dimensions of vulnerability (e.g. population growth) and their links to social issues (e.g. alcoholism, domestic violence and petty crime) that they viewed as likely to be heightened through ecosystem decline. Currently, the migration of highlanders to coastal centres seeking employment is viewed as contributing to the loss of local ecosystem services. For example, in the coastal village of Riwo, participants attributed land use conflict and a lack of bush materials for construction of houses to local population change. When coupled with sea level rise, which erodes the community’s land, a vicious cycle might result which heightens demand for unsustainable economic development and over-extraction of natural resources.

To address impacts of concern from climate change, workshop participants were asked to develop project plans, using a simple template that called for them to consider collective action, at the scale of the village ( Table 2). These projects addressed typically place-based, direct environmental impacts, but also impacts of issues such as population growth and migration indirectly linked to ecosystem change through the need for economic development. 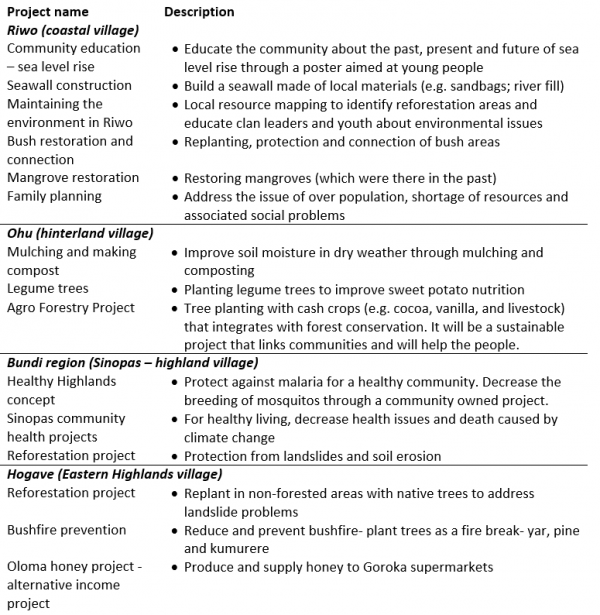 While members of the community expressed considerable enthusiasm to promote collective action, they nevertheless voiced concerns about a lack of resources (financial, knowledge and equipment) to implement these plans that, if not addressed, would likely result in little progress.

As a final phase to our project, we brought together, in a workshop setting, members of each of the communities with representatives of their respective governments, at provincial, district and ward levels. The aim of these workshops was to establish connections between government and communities for exchange of information on the community’s need for assistance with adaptation, and any resources that might be available through existing government programs.

Although we were able to match some projects to provincial government programs in agriculture and reforestation, an important limitation noted by government representatives was the absence of a functioning provincial office of climate change. In Madang Province the government has established a Provincial Climate Change Committee however it has no resources and currently is actively supported only by the agriculture agency. Biodiversity conservation and climate change adaptation are seen as cross-cutting policy issues that require cross-division policy and planning. Issues of governance, such as a lack of funding or funding delays, leadership and administrative instability, and communication weaknesses to other layers of government, were identified by government staff as obstacles to effective action and must be resolved for successful adaptation to climate change and biodiversity conservation in PNG.

Louise Boronyak is Senior Research Consultant for the Institute for Sustainable Futures, University of Technology, Sydney.

Francesca Dem is Deputy Director of the New Guinea Binatang Research Centre. She is an entomologist and insect taxonomist.