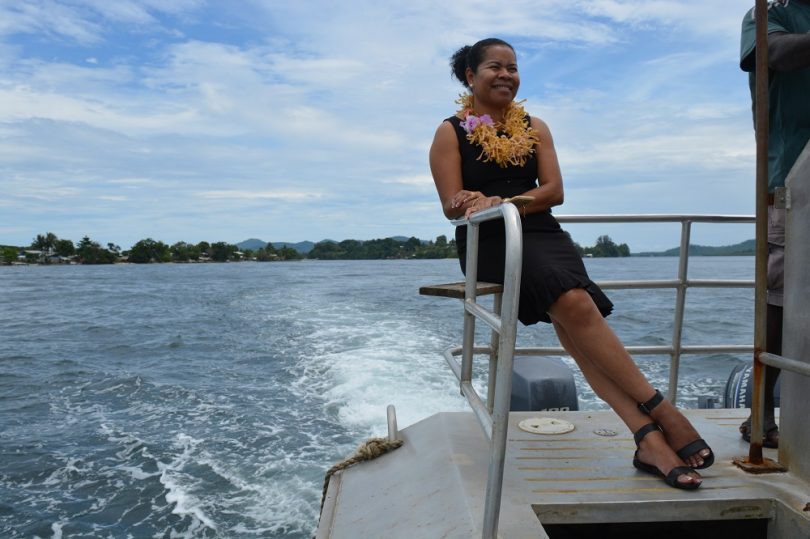 Ms Beatrice Mahuru is head of the Digicel Foundation in Papua New Guinea (PNG). As part of the Pacific Conversations series, she spoke to Dr Amanda Watson about the organisation’s areas of focus, its relationship to the Digicel business and her heart-warming experiences in the role.

Amanda: You were previously in corporate roles. Was it an adjustment to join the Digicel Foundation?

Beatrice: Moving into the development space was very new, but one of the things I brought was a corporate approach, so a ‘no-nonsense, get your business done, report on the outcome’ approach.

What do you do on a day-to-day basis in your role?

We have 34 projects at present, plus eight in collaboration with the Australian Department of Foreign Affairs and Trade (DFAT). My role is to watch over the foundation’s operations to ensure that our finances are managed well against our targets. I’m very hands-on, making sure program impacts are documented and that projects are progressing to the agreed timelines, because we have PNG Board and Global Board meetings every month and they are kept across our investments. I have a small team and sometimes development work can be overwhelming so I want to be there for them, to motivate them and keep them committed to the cause. I continue to build and foster relations with Digicel every day and grow goodwill with our marginalised communities. And every other day, I’m connecting with members of parliament or corporate organisations to seek possibilities for public-private partnerships.

You mentioned building goodwill … is that the main aim of the Digicel Foundation?

Prior to last year (FY14/15), we responded to community applications and we operated very separately to the business. We’re still a separate entity but our strategy is to work more collaboratively with Digicel. Although Digicel has invested in many towers across PNG, the business still receives negative feedback, especially through social media, on the cost of service. We grow goodwill through our development impact projects and lay the foundation on which business can follow. Last year, we probably put 40% of our investment into promoting goodwill and the rest was responding to applications received.

Although we’re funded by Digicel, we’re a separate entity because we’re set up that way and we have a separate board. But to ensure due diligence and sound financial management, our finances go through the business.

In the United Nations Human Development Index, we’re 156th out of 188 countries. That’s quite low, despite being a resource-rich nation. The Digicel Group Chairman Denis O’Brien believes that as Digicel grows, its communities must too. And when Digicel successfully entered the PNG market, Mr O’Brien felt it was necessary to invest back into the community, and that’s what we’ve been doing since.

The Digicel Foundation has spent over US$25 million in PNG. Does all your funding come from Digicel?

We are funded wholly by Digicel. This is the first year in which we received grant funding from DFAT to implement education projects for them in the Autonomous Region of Bougainville. 15% of my budget goes on administration, such as staffing and travel.

The foundation initially focused on health and education. Do they remain important areas?

They remain core areas of focus. 60% of the foundation budget is spent on school infrastructure – classrooms with desks, plus office space, toilets, water tanks and solar lighting. The DFAT project in Bougainville will include Wi-Fi and an intranet containing educational materials. When a school requests infrastructure, they have to demonstrate good governance and community ownership. In fact, all potential partners are assessed using such criteria. We also have mobile health clinics that do their rounds and treat patients. 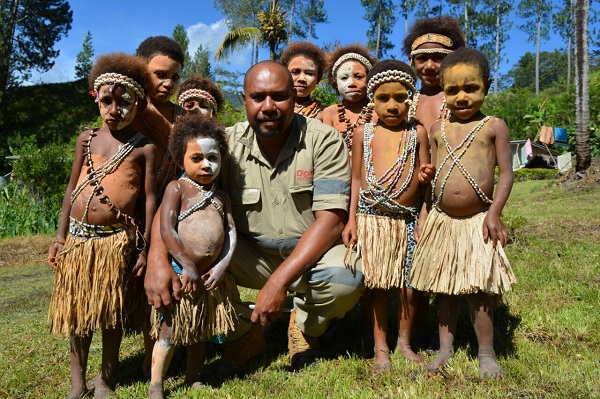 You have now added three other key focus areas: the elimination of violence, special needs, and community building. Why was violence a concern for the foundation?

As a Papua New Guinean, I’m very passionate about advocating against violence. It’s a social scourge. When they say that all men are violent, it gets me very upset because my father wasn’t. He believed in me before I realised my potential. I believe every PNG woman who holds a good role has had an amazing father behind her. So it’s in acknowledging those good men that we decided to start the Men of Honour awards. There are honourable men out there – let’s bring the stories forward.

What is the foundation doing in relation to special needs?

We work in close collaboration with Cheshire. We fund their community-based rehabilitation program in communities, settlements and villages. So many amazing stories have come out of that. I met a little girl who had her disability as a result of meningitis, so she wasn’t able to feed herself, talk or walk without aid. Six months after the program, the girl was walking without aid, and 18 months after the program, she’s able to read and has started school.

Did you know that 60% of any urban population is made up of youth, aged between 16 and 25? We developed a program in partnership with Ginigoada called the Life & Business Skills Program to address this age group and the problems associated with unemployment. It’s a community conversation in the first week around violence, personal health and wellbeing, and a basic business skills training in the second week. Though poorly educated, our people are very entrepreneurial. We’ve completed the program here in Port Moresby and we are fortunate to have a ‘Men of Honour’ finalist run the program in Lae.

What has been heart-warming for you at the foundation?

I think the calibre of stories that come through the ‘Men of Honour’ awards is pretty heart-warming. But what really pulls at my heartstrings is the smile on the face of our communities, and especially our little children, when we lay down education or health infrastructure. You see so much hope in their eyes and feel deep appreciation in their embrace.

Amanda H A Watson is a Lecturer with Australian National University, based in Port Moresby at UPNG under the UPNG-ANU partnership. Beatrice Mahuru is Chief Executive Officer of the Digicel Foundation.

Beatrice Mahuru has been Chief Executive Officer of the Digicel Foundation since December 2012. Before that, she was the Senior Program Manager. Prior to joining the foundation, Ms Mahuru had a regional communications role with ANZ. She has also worked for Kina Security, SP Brewery and Coca Cola.