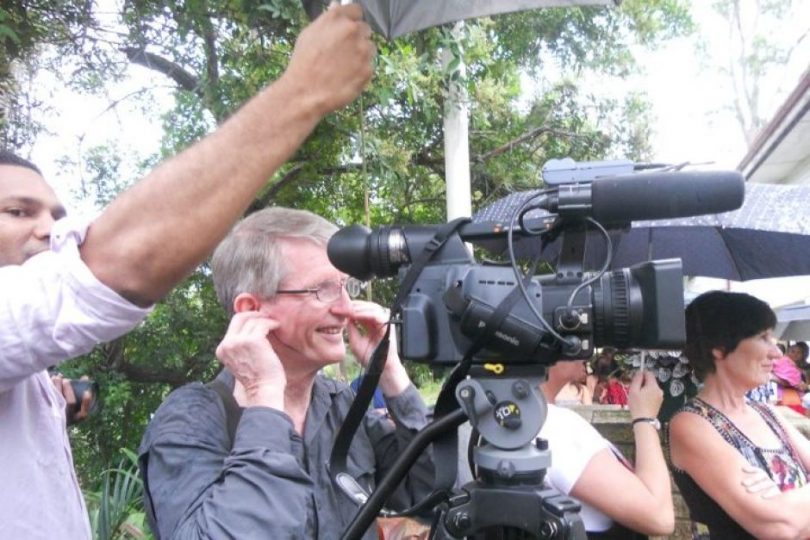 Recently in Brisbane, Tess Newton Cain caught up with Sean Dorney, veteran PNG and Pacific affairs reporter for the ABC. You can listen to a podcast of their conversation here and or read the transcript here. For the highlights of what they discussed, read on… (spoiler alert – they didn’t talk much about PNG).

I began by asking Sean which of the stories he covered in the Pacific (outside of PNG) were the ones that had the most impact on him. It’s not an easy question to answer; there have been so many. And, as Sean noted, the region is hard to pin down:

“Look, one of the things about the Pacific is all the countries are so very, very different. The Polynesian countries are different from the Melanesian countries. They’re both different to the Micronesian countries. And I’ve been fortunate enough to have been to almost every one of them. And what I find fascinating is that no matter where you go, every country has its own… individual issues and problems. So, that’s what I’d start with, is that there’s a huge variety of interesting things going on in all these different countries.”

Understandably, the coups in Fiji are stand out moments in Sean’s memory. Not least because some of his reporting led to his being deported from that country. But he did identify one issue that he has covered over many years, which he sees as being one that resonates in almost all of the countries of the region – regional and sub-regional management of tuna fisheries:

“I was at the very, very first meeting, where the Forum Fisheries — the PNA, Parties to the Nauru Agreement, they met in Nauru of course. And it was… almost a ground-breaking getting-together of these different Pacific countries who all realised that they had to get their hands together and grasp this issue.”

Next, I asked Sean what had been the most significant changes he had seen in the region, both positive and negative. Starting with the positive:

“Confidence, I think, is one of the interesting things. The greater confidence that Pacific islanders have developed in themselves and in their negotiations with the outside world, that’s one thing that I would put down as a positive.”

Sean referred back to the management of fisheries as an example of this confidence he had witnessed, noting that we have seen it again more recently in the realm of climate diplomacy:

“Well, there’s certainly been a cohesive effort in the Pacific, and they’ve actually made their voices heard of those international fora. So, that is one issue on which I think there is sort of unanimity in the Pacific.”

In terms of negative shifts, Sean went back to the coups in Fiji to explain why he thought they were detrimental to the region as a whole:

“Well Fiji for so long was such a leader in the Pacific. And now, you’ve got a leader in Fiji who came to power initially through the barrel of a gun, basically. And I don’t think it’s a good thing for the Pacific… because despite Papua New Guinea being the most populous country, for so, so long Fiji has been almost the de facto sort of principal country.”

We turned our attention to the media and I asked Sean what he thought were the opportunities and risks that were significant for the media in Pacific island countries. He identified attempts to limit media freedom as one of the biggest challenges we face in the region:

“So, there are people in the Pacific who don’t like journalists inquiring into anything. That’s one of the problems. I’ve got enormous faith in the quality of some of the journalists in the region, but… things aren’t, I think, getting a lot better in a lot of places. I think that the restrictions and freedom of the media are issues that really need to be… fought for, and there are groups of Pacific islands journalists who are… fighting that fight.”

When asked about the way in which the Pacific and Pacific issues are covered in the Australian media, Sean pointed out to me that the two key factors are interest and cost, in that order of priority:

“…there doesn’t seem to have been a belief in any of the managements of the major news organisations in Australia that the Pacific is in any way important. So, the bosses’ attention to the region has just not been there. And then the cost issue, of course — it is quite expensive to travel.”

Sean noted that more recently there does seem to have been an increased focus on what is happening in the Pacific by the Australian media, but only as a reaction towards concerns about growing Chinese influence in the region. He is quite clear that this is too narrow a focus but sees that it may have some limited benefit:

“…it may have the positive effect of making some of the bosses realise that this China story is going to be an important one. Therefore, we need people to get on the beat, get out there, and find out what’s going on. So, that may be… a positive. And I sincerely hope that some of those… news executives who make these decisions are looking at this issue and thinking “Gee, we don’t know much about it. How has China picked up this ball that we seem to have dropped? Let’s go and find out a bit more about this.” So, one of my hopes is that that will happen.”

Finally, I asked Sean what he thought should be done to engender a sense of the Pacific island region and its importance in Australia and among Australians more generally:

“I think it’s time that we actually had, in the Australian schools’ curriculum, some elements that… teach our kids that we actually have a responsibility… to where we live in the world, and to the prosperity and good health of these Pacific island countries, which have looked to Australia in the past for help and assistance. I think New Zealand pays far more attention to the Pacific generally than Australia does. But I think that this is… our part of the world. This is where we live. This is where we have and can have such a great impact.”

For more on Sean’s work and involvement with the Pacific, particularly PNG, watch The Village on Foreign Correspondent.

Sean Dorney was a Foreign Correspondent with the ABC for four decades, concentrating on Papua New Guinea and the island nations of the Pacific. He is now a Nonresident Fellow with the Lowy Institute for International Policy.