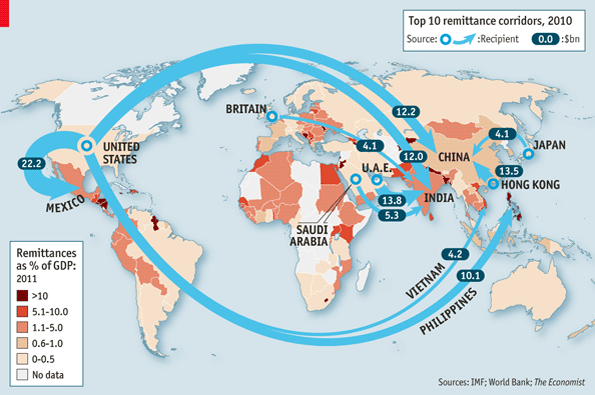 Okeny Secondo is a disability support worker in his early 30s who lives in Redbank Plains, a suburb of Ipswich. Born in Sudan, he fled to Uganda as a child, then migrated to Australia. Mr Secondo and his wife, who works as a meat industry processor, send almost one-third of their income back to help friends and families in Africa.

“I know what it’s like to live with uncertainty in a war-torn country”, he says. “I’m very happy to be able to support my family and friends to make them more secure. Sometimes we get urgent requests for emergencies and it’s great to be able to get money to them immediately.”

Mr Secondo is among thousands who send remittances to help people in developing nations. With international migration projected to account for a growing share of the population in the future, remittances will only grow in importance. When a grandparent falls ill, or a child needs to pay school fees, families in developing countries often turn to generous relatives in countries like Australia to send over some cash.

Globally, remittance flows are almost a trillion Australian dollars. For many developing nations, remittances are worth more than foreign aid. Some economies would collapse without remittances. In Tonga, remittances account for more than one-third of national income. Behind that statistic are thousands of hard-working Tongans, putting in a few extra hours at work so they can give some of their pay check to less fortunate family members.

Unfortunately, the remittance market is a confusopoly, with providers routinely pulling the wool over their customers’ eyes. The problem arises because international money transfers have two costs – a flat fee, and an exchange rate mark-up. Plenty of providers are telling their clients about the flat fee, but not disclosing the mark-up. As a result, Australians pay among the highest transfer fees in the advanced world. According to the World Bank, an Australian who wants to send $1,000 to a developing country will see $77 eaten up in fees and charges.

Thankfully, there’s an easy solution to crack the confusopoly: full fee transparency. That means requiring remittance providers to tell customers the total cost of their services. By using the benchmark exchange rate – which is the rate you see if you use Google Finance or Yahoo Finance – providers can quickly calculate their total fees. Under a Shorten government, that will be mandatory.

As the Shadow Minister for Competition, I’m always keen to get markets working better for consumers. But for me, this one is particularly personal. As a child, I lived for three years in Indonesia. I know how much it matters to the world’s poorest people to miss out on even a few dollars. As a local member of parliament, I’ve spoken with constituents who are working extra shifts to send money overseas. These people – manicurists, restaurant workers, gardeners – are among the hardest-working and most generous people I know. Justice Hayne’s Royal Commission report has revealed too much misconduct in our financial sector. It makes me angry to think that banks are also ripping off migrants through confusing pricing schemes.

There’s another thing too. Since coming to office, the Coalition has savagely cut Australia’s foreign aid budget. As a share of national income, Australian aid is now at its lowest level in more than a generation. Those cuts have often come at the expense of people living on a couple of dollars a day. This makes it even more urgent that we fix remittances, so more of the money goes to the vulnerable families that it’s intended to help.

We shouldn’t for a moment think that this will jeopardise national security. Just as with other aspects of banking, there’s no contradiction between stringent controls to catch wrongdoers and transparent pricing to ensure that institutions don’t gouge their clients. Australia shouldn’t have to choose between strong banks and ethical banks. We should have both.

Every dollar in fees that we can save Okeny Secondo is another dollar that can help his family and friends in war-ravaged central Africa. That’s why Labor is committed to making remittances fairer, simpler and more transparent.