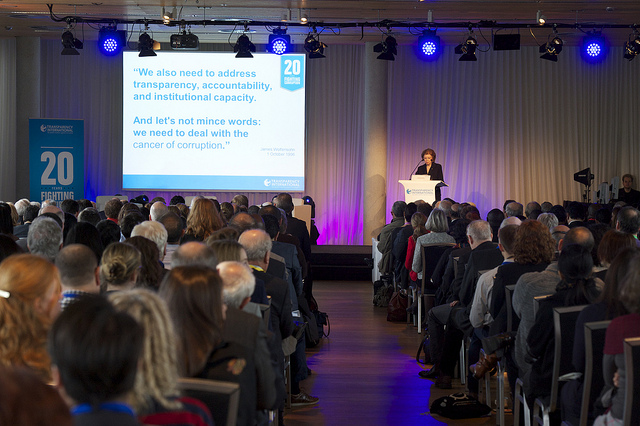 Last year I wrote about the rather embarrassing situation facing organisers of the 16th International Anti-Corruption Conference (IACC) – which was held in Malaysia. The IACC invited Malaysian Prime Minister Najib Razak to headline the event while he was, ironically, being investigated for his role in a then US$700 million corruption scandal. The IACC eventually dropped the PM from the program, replacing him with his integrity minister, Paul Low. The organisers, Transparency International, opened the conference by declaring that the Malaysian government must explain the scandal and would have no credibility until it did so.

However, as others noted at the time, inviting a politician involved in a huge corruption scandal to head the world’s largest anti-corruption conference was not a good look. Particularly as the scandal has only grown. The US recently stated its intention to seize more than US$1 billion in assets connected to the Malaysian PM – the largest ever seizure by the Justice Department’s anti-corruption unit.

Aside from not inviting a keynote speaker under investigation for corruption, in my previous blog I outlined a few things that conference organisers could do to better support ordinary anti-corruption champions, rather than compromised elites. One suggestion was to reduce the extortionate fees charged, particularly for NGOs and community groups. So I’m chuffed to find out that the organisers of the 17th IACC (to be held in December 2016 in Panama City) have done just that. They recently announced that registration fees for NGOs, academic institutions and students would be reduced by 50 Euros – the early-bird price is now 300 Euros (AU$436). 300 Euros is still too pricey, but it’s good to see they are moving in the right direction.

On the very remote chance that organisers read my post, and the even remoter chance that they were influenced by it, I’m taking this opportunity to make some additional suggestions — particularly for the organisers of the upcoming 17th IACC, but also, more broadly, for those seeking to create meaningful spaces to engage with the problem of corruption.

This time I’ll draw on some of the rather critical (and in his own words ‘slightly sarcastic’) suggestions of anti-corruption blogger Professor Matthew Stephenson who, after attending the IACC and other anti-corruption conferences, felt some ground rules were needed.

First, Stephenson suggests that conference organisers get all of the meaningless motherhood statements about corruption out of the way in the opening session. This includes noting that corruption is bad, not a victimless crime, contributes to lots of problems, requires a coalition of people from all sectors of society to fight it, and it costs a lot. In Stephenson’s view, speakers would also do well to cease referencing the numerous dodgy statistics on corruption (see examples here, here and here). After a brief mention at the opening ceremony, none of these points – including the made up stats – should be mentioned again for the remainder of the conference (unless to critique them).

I also suggest that Transparency International’s ubiquitous Corruption Perceptions Index (CPI) face similar treatment. Presenters should, at the very least, be encouraged to refer to statistics from this index with great care. In fact, it would be good to see presentations on what the CPI cannot do, given its frequent misuse. Based on what Stephenson has written about this index in the past (see here and here), I’m pretty sure he’d agree.

Second, in a similar vein to my previous blog, Stephenson argues that organisers should stop inviting senior politicians. Or at least stop sucking up to them and “cut back on the pomp and veneration”. This includes reducing their involvement in often overblown and time-consuming welcoming addresses.

Finally, Stephenson urges presenters to examine a new idea, report, or data, rather than simply tell “war stories” about fighting corruption or describe what their organisations do. He’d like to see commentators attached to each panel who are not afraid to provide critical reactions to presentations (an approach taken by some American academic political science conferences).

I agree wholeheartedly with the first two points, but suggest caution with the third. A critical discussant is certainly a good idea for panels including government officials, academics and international NGOers. However, getting more grassroots anti-corruption activists involved will, in some circumstances, require providing less combative spaces for discussion.

Stephenson also rallies against the bugbears of many conference goers: poor time-keeping, scheduling, and limited interaction between presenters and audience. However, it is his rallying cry for better, more critical discussion about corruption which is particularly important for those wanting to meaningfully tackle it.

Now more than ever, anti-corruption advocates and practitioners need to be armed with a critical understanding of this complex, contested and multi-faceted issue. It’s time to stop referring to populist narratives and dodgy statistics, and change the conversation about corruption. The upcoming IACC is a good place to start, but efforts must be ongoing.