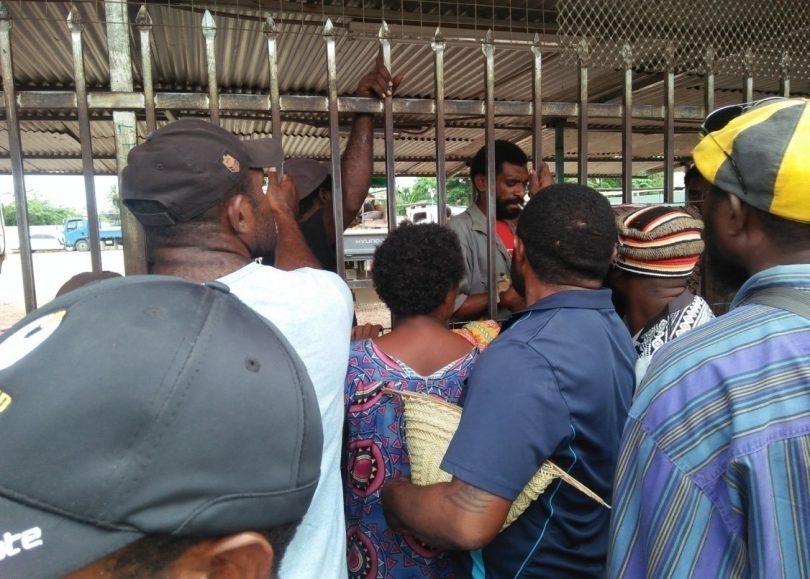 Buai seller Joshua, in the blue shirt with basket, trying to push his way towards the buai bag seller inside the fence at Waikele open market (5.30pm, Feb 13, 2020)

Trying to purchase a 10kg bag of betel nuts (buai) from Gerehu’s Waikele buai warehouse is like baiting an elusive fish, thirty-something Joshua reflects with the usual smile on his sweaty face. “We are like fishing!”. Patience, skill, alertness, wit, and assertiveness – with unbudgeted costs for favour-solicitation – count with the wholesale fresh buai suppliers. Even being known or ‘save pes’ is of no reprieve. Joshua is from Kudjip, Jiwaka province, and has been living in Port Moresby for the last five years with his wife Angeline and two children. He is proudly self-employed, sustained by the sales of buai at Tokarara market in Port Moresby.

Joshua’s day begins with alternating runs to and from the only buai warehouse, at Waikele in the capital. It is owned and managed by Khaimo (an alias), a short and stout Engan, former school teacher, and later a trash bottle collector. He has been in buai business for decades since and is now a typical hevi baia. He is well known among the rural buai suppliers from Mekeo and Gulf villages along the western coastline of Port Moresby. So well, that Khaimo himself enjoys and exploits the rare privilege of mutually dealing open-ended buai business with them (dealing in credit).

Khaimo ferries buai from the furthest parts of Gulf both by sea and road, including by air from Oro province. Buai suppliers from Oro hire truck loads to Girua airport, where a phone call is made to Khaimo for his assistance. Khaimo authorises the charter plane by paying half of the cost, including the buai bags. As he is licensed, the buai arrives at Jacksons airport and is immediately dispatched to Waikele warehouse.

Khaimo is said to have paid for his warehouse operating licence at a price of some K300,000, targeting a retailing monopoly on the bulk supply of buai to the city. He is also rumoured to be a staunch supporter of the Port Moresby governor, whose election bids have been partially covered by Khaimo’s buai enterprise. They were old friends living alongside each other in Gerehu suburb. Khaimo strategically had a huge hand in the governor’s very first election victory in the National Capital District. He has been anecdotally recalled as saying, “I need no other city business contract, just give me the licence to trade as the bulk supplier of buai to the city!” This was in response to the victorious governor’s nudge to Khaimo to see if he had anything in mind. 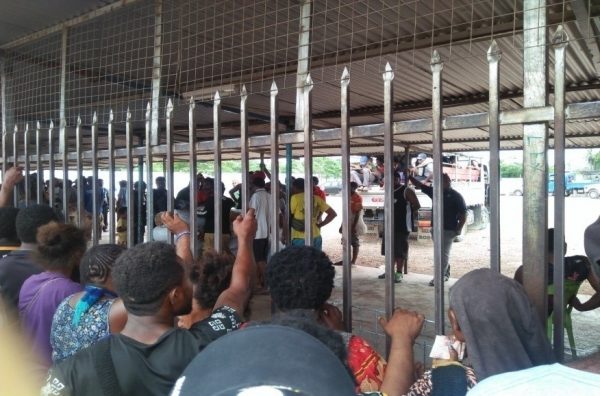 Jostling for space and attention at the Waikele warehouse. City market vendors in the foreground, rural buai bag sellers crowding around the bags inside the fence, and a PMV truck that brought in the supplies parked inside Khaimo’s rented premises (5.30pm, Feb 13, 2020)

Khaimo earns his cash at night, morning, during the day, and evening – 24/7. The warehouse opens to city buai vendors to haggle twice a day, from 6am-10am and 3pm-10pm in the evenings. The takings get deposited daily in his Bank of South Pacific (BSP) account during the week. This quickly became irksome for the bank tellers, and with approval from their superiors a separate room was created for Khaimo’s daily supply of cash. He is the boss of his business, policeman, and judge and jury over disagreements arising among the vendors. Informants claim that he pays off his K15,000 monthly rent within a day, as he generates between K30,000-70,000 daily. Revenue is made from the gate charges and the various bag sizes, from 10kg to 20kg farm set bags. Mustards (daka/vaga)– that come in the form of leaf-wrapped parcels and 10kg bags – have separate charges. The state’s income tax seems to be out of the equation!

Khaimo carries a pistol too and had used it before without hesitation, including during occasional hold-ups by rascals. Even then, he is usually fair in dealing with the opposing groups: the city retailers, who are mostly from the highlands region and tend to be upfront (Sharp 2019 aptly refers to them as the “haggling highlanders”); and the rural buai suppliers from Mekeo, Gulf and Rigo. The latter display a laid back, yet cold character described as indifferent, lukewarm, and even audacious in this business context. This is where the city vendors dig deep in order to attract, entice and snare the rural fresh buai suppliers.

Between fifty to a hundred men and women line up each time the Waikele warehouse is open, crowded sweaty bodies all vying for the attention of the rural buai sellers. Bundles of PNG Kina notes are held aloft over their heads, as they yell for attention. Occasionally these bundles are swung at the bag sellers, who in turn ignore them and walk away. If they pick the cash up, this would be read as consenting to business engagement. A neutral security staffer or opp-sider of a PMV truck might pick up the wad of cash and return it to the owner.

Often enough, a Coca-Cola can is offered as a thirst quencher. The additional costs for solicitation with Coca-Cola range between K50-80 per trip. If one were to show up with a tidy budget of say K500-700 for a bag, less the Coca-Cola expense, one wouldn’t succeed.

The rural buai bag seller always wears a hard face for the city retailers. If the former makes eye contact, perhaps smiles, and then accepts the offer of a Coca-Cola, then one is in for a chance of purchasing a coveted bag of fresh buai nuts. However it would be foolhardy to think that you have snared your prey, and therefore could haggle over prices on offer or even plainly make enquiries. Many disappointed city market retailers had their Coca-Cola returned politely with the buai bag seller walking away nonchalantly to the next customer. Business gone!

If your cash was not taken at all, let alone eye contact made, you could be left behind waiting for hours and head home empty handed. One must exercise patience, beg, use persuasive language like those of a lover’s suitor, become assertive — but it is all up to the buai bag seller.

In the meantime queues of taxis are lined up along the roadside opposite the Waikele open market. Taxi drivers are acutely aware that buai vending is a lucrative business, and ferrying them is a more reliable business than that in other locations in the city. The same queue of taxis can be observed at the Tokarara roadside buai market. These ferry the vendors to and from the Waikele buai warehouse every day – morning to evening. Even a policeman has established clientele relations and regularly uses his old white Toyota ute to ferry city buai vendors for a fee.

This is a snapshot into the prolific buai trade in Port Moresby, where an official ban on sales has been in place since 2013. The kinds of dynamics we describe here resonate with Tim Sharp’s (2013, 2019) observations about the relations and negotiated spaces between the buai vendors/baias and the strategies employed in various socio-economic contexts. As he observes, throughout PNG buai is exchanged in varied ways. It is a commodity, and at the same time the way it is handled, managed, and how its values are redefined in various social and economic contexts in PNG, makes buai a phenomenon bigger than just a commodity or a health issue. Despite the ban, buai remains an important indigenous product that is exchanged at many levels and is an important source of income, and therefore employment, for many people.

Our thanks to Michelle N. Rooney and David B. Kombako, who read the very first drafts with many helpful comments, while Martin and Aiwa of Tokarara buai market provided additional fresh information.

This article was written before COVID-19. The buai trade, like much life in PNG, has been temporarily disrupted, but remains active and will further recover as the lockdown is lifted.

Linus digim'Rima is the Head of Anthropology, Sociology and Archaeology at the University of Papua New Guinea.

Joshua Apa is a buai vendor at Tokarara market in Port Moresby.