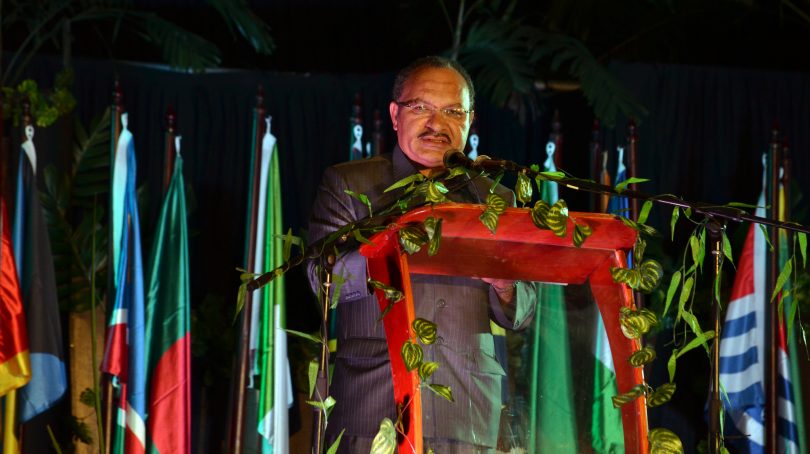 Papua New Guinea enters its 2017 national election at the back of one of the most contentious periods of its democracy. Prime Minister Peter O’Neill’s reign began unexpectedly in August 2011 after the then Prime Minister Sir Michael Somare was ousted by the PNG parliament following his long absence from the country due to illness.

The Supreme Court later reinstated Somare on 12 December 2011 only to be rejected by the O’Neill led parliament a few hours later, commencing a dark period of PNG’s democracy where the country appeared to have ‘two’ prime ministers for nearly seven months – O’Neill operated from the Parliament House and Somare from the Ela Beach Hotel. It was a period marked by a decline in public confidence in the judiciary, a divided police and armed forces and a perplexed public service.

The 2012 national election provided the ultimate showdown for the two warring factions. However, with an assurance to deliver the country from the misfortunes of Somare’s National Alliance government, O’Neill and his coalition partners found favour with the people. The 2011 constitutional impasse appeared to represent a change of the ‘old guard’ in PNG politics and an undesirable initiation for the new crop of leadership with Peter O’Neill hoisted to symbolise this transition.

Prime Minister O’Neill appeared at that time to represent the long awaited hope for the country. His government immediately appealed to the people through its flagship policies for free health and education services, and infrastructural development backed by a strong anti-corruption focus in the form of the Investigative Task Force Sweep (ITFS).

Projected revenues from the billion-dollar liquefied natural gas (LNG) project and other resource developments in the country provided the assurances that his welfare policies would be sustained and effectively delivered. On the anti-corruption front, O’Neill pledged to support the ITFS to systematically ‘weed out corruption’ in PNG.

What has happened since?

Five years later, the people are called upon to judge the performance of the O’Neill government. For many, the results over the years appear unconvincing. The high hopes of sustained payouts from the LNG project and the resource industry were soon dashed, and led the government to borrow huge sum of loans from overseas to supplement the national budget and sustain its welfare policies.

As loan repayments took preference, and many resource revenues were depleted, the result was a period of continued budget deficit. The government repeatedly attributed its economic woes to unstable global commodity prices. However, such excuses do not absolve its responsibility. The lack of prudent fiscal management, many have argued, draw into question the government’s ability to lead the country’s economy in an increasingly unstable global environment.

How has the delivery of free health and education services fared? Free schooling has raised access to education for students but also means overcrowding in classrooms. Overcrowding, lack of teaching materials and teacher shortages continue to affect the quality of learning output. Whether the policy has had a measurable impact on the quality of education in PNG, as opposed to quantity is doubtful.

Increasing media reports of schools and hospitals in the country running out of funds to sustain their operations further indicate the extent of the government’s fiscal woes. A request early this year for Australian aid for funding indicates the projected challenges ahead.

Despite the government’s shortfalls in economic management, there remain some successes and benefits most notably in the infrastructure and construction sector, especially in Port Moresby. For instance, the airport bypass bridge, the improved road conditions and the upgrade of the Sir John Guise stadium (although not fully completed) are evidence of overseas loans. These are important developments in the city.

These developments have enabled Port Moresby to host significant international and regional events, undoubtedly raising the profile of PNG. But the end does not always justify the means, as amidst these developments are also allegations of discrepancies in the procurement and tender processes and inflated cost estimates of these projects.

While Port Moresby thrives, the majority of the towns and districts across the country remained under-developed and seemingly forgotten. Their allocated Provincial Support Improvement Program (PSIP) Funds and District Support Improvement Program (DSIP) Funds are often politicised, inadequate or misused by their political leaders. The enactment of the District Development Authority (DDA) Act 2014 gave MPs unprecedented political influence over the public service machinery in the districts.

The outskirts of PNG present a stark contrast to the glowing cities – a troubling outlook given more than three-quarters of the population still lives in rural areas. Foreign investments in resource industries remain stable yet the benefits are unequally distributed to many parts of the country.

Like his predecessors, O’Neill’s government is challenged with serious allegations of corruption and mismanagement. O’Neill inherited a system already plagued with corruption but it appeared to escalate during his reign. His promise to ‘weed out corruption’ took a firm foothold with the early successes of ITFS’ investigations including the successful prosecution of Paul Tiensten, a sitting MP and former senior government minister, who is currently serving his nine year prison term. To his credit, the successes of ITFS alarmed the PNG political and bureaucratic establishment.

However, praises for O’Neill quickly turned to distrust, as he became the subject of serious allegations of corruption. The O’Neill government repelled the charges and condemned the fraud investigators, the courts and the attorney-general as ‘politically motivated.’ The extent of his responses to prevent arrest would make the case one of the most highly convoluted corruption investigations in the Pacific.

Sacked, under-funded and embroiled in a craftily drawn out court proceedings for more than two years, the exhausted ITFS team recently decided to discontinue the case against the Prime Minister. The ITFS’ decision was partly influenced by a National Court judgment that refused to grant ITFS’ request for reinstatement after being disbanded by the National Executive Council (NEC), which is chaired by Prime Minister O’Neill, himself the subject of ITFS’ investigation. The Court advised that the matter be left to the voters in the coming election if they are concerned with the actions of O’Neill’s government, as ITFS is only a creature of a NEC policy decision and does not have separate legal entitlement to carry on its functions once disbanded.

To resign to the voters not only relieves the court of an issue it should have legitimate interests in as the guardian of the justice system, but importantly raises the most critical question – will voters in PNG be able to make the ‘right’ decision in all fairness? What is the ‘right’ decision? Maybe Papua New Guinean voters might put an end to this debacle if they decide to disarm O’Neill’s political power, but is it possible amidst concerns for electoral fraud and bribery?

If history is anything to go by, governments in PNG that have been embroiled in allegations of serious corruption always struggle to return to power after an election. The case of National Alliance after the 2012 election is an example. There have been reports of MPs under O’Neill government being rejected in some electorates by the people. Prime Minister O’Neill may have administered an admirably ambitious regime but its controversies stand to overshadow its daring achievements.

The O’Neill Government is projecting itself as reliable and deserving of a second term. How will the people respond? The second post in this two-part series will explore some of the questions raised here, the possible election outcomes and the potential consequences for O’Neill’s legacy.