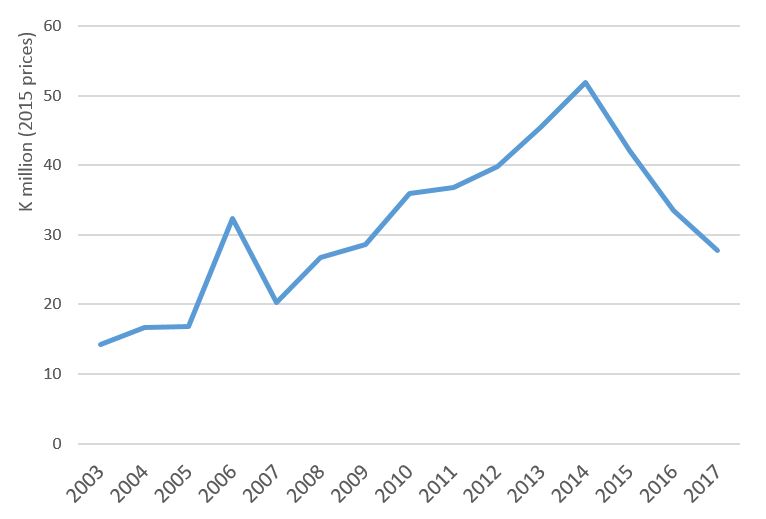 Papua New Guinea’s 2017 budget, brought down last week, has some pretty simple maths behind it. With revenue projected to be slightly up, and borrowing slightly down, total expenditure is virtually unchanged – all compared to the supplementary 2016 budget, which scaled back both revenue and expenditure from their original 2016 budget levels. Salaries and interest are also unchanged (which seems optimistic given a mounting debt stock and threats of strikes). So are funds for MPs. An extra K550 million had to be found to pay for elections and APEC. Something had to give. 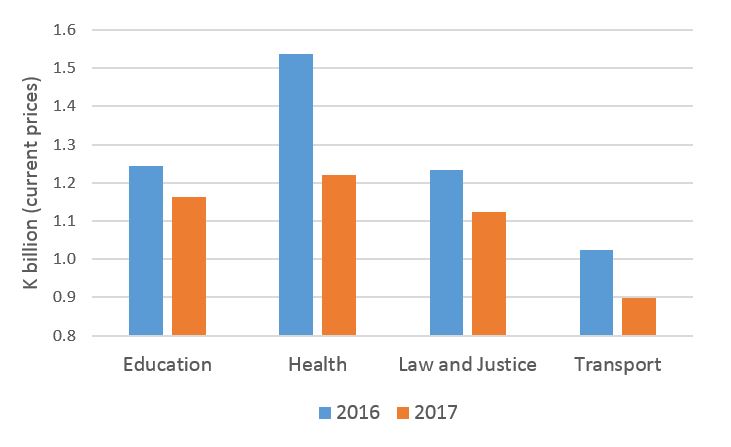 These cuts come on top of significant sectoral reductions in both 2015 and 2016. The Central Bank (see Governor’s speech 16 May 2016) shows cuts between 2014 and 2015 in health of more than 30%. Matthew Dornan estimates road rehabilitation and maintenance reductions of 50% since 2012.

Education, health and so on are abstract categories. More concrete examples are useful. Take the Angau Memorial Hospital, PNG’s second biggest, in Lae. It received a nominal cut of 11% in the 2017 budget (relative to the original 2016 budget), on top of two successive annual 15% cuts. Adjusting for inflation, as one needs to do for comparisons over longer periods of time, Angau’s budget for 2017 will be just over half of what it was in 2014: see Figure 2. No wonder there are reports of staff being laid off. As the figure below shows, Angau did well during the boom years, but has suffered since: its 2017 budget is below 2009 levels. Just think about how much Lae has grown over that period.

How could have these cuts to core services have been avoided? It might be argued that the government should have borrowed more . Yet the government seems to be borrowing about as much as it can (as it should, given the drop in revenue); and debt/revenue ratios are approaching historic highs, as Figure 3 below shows. The International Monetary Fund, World Bank and Asian Development Bank could be tapped for further budgetary support lending, but that would require a reform program. 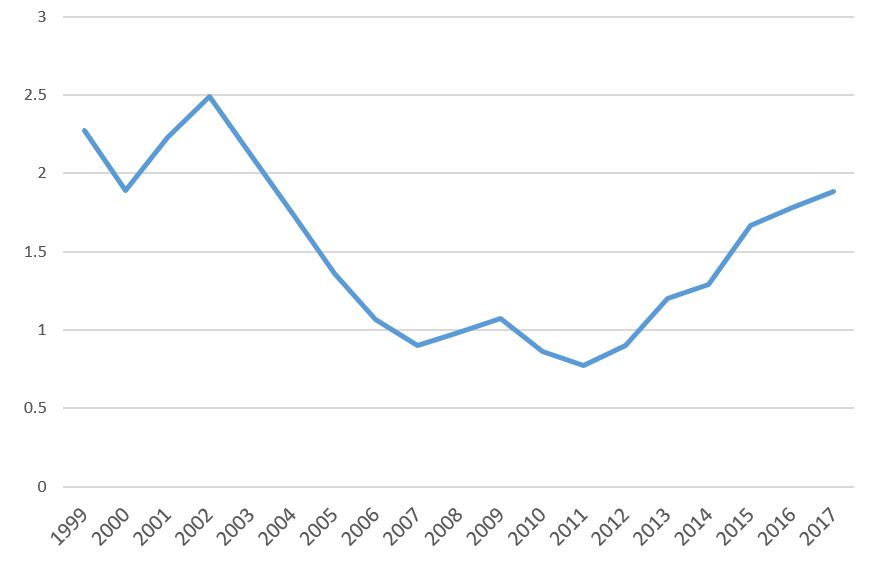 Core services could have been better protected if MP funds had been reduced. These funds are spent at the district, provincial and sub-district level, through programs such as the District Services Improvement Program (DSIP), mainly under the control of PNG’s members of parliament (MPs).

As the figure below shows, MP funds were much smaller in the past, but they have been ratcheting up, first in 2006 and 2007, and then in 2012. There have been subsequent declines in both cases, but not back to their earlier levels. PNG makes more reliance on spending through MPs than any other country in the world. It spends as much on MP funds as it does on health, and more than it does on law and justice, or on transport. 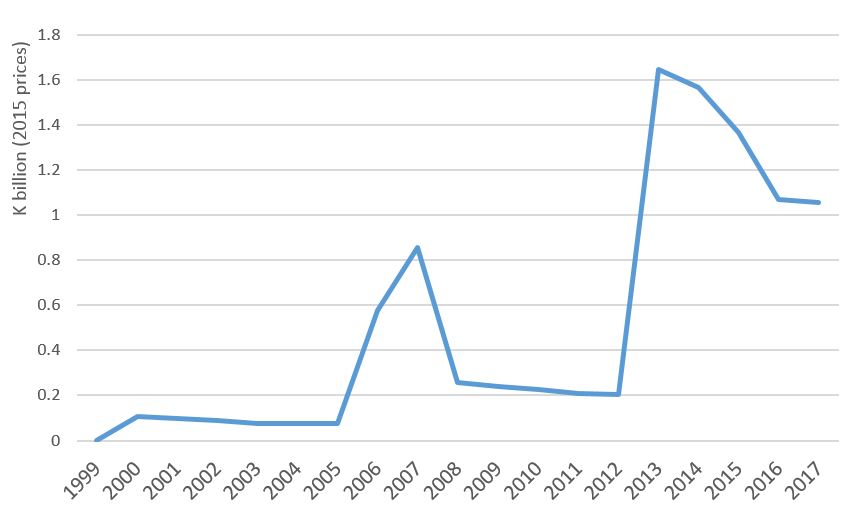 Whereas hospital funding as a whole in PNG is 16% below the 2012 level, MP funding is at five times its 2012 level. Perhaps it is unrealistic to think that MP funding might be cut before the election. But the increased share of MP funding in total expenditure from just 2% in 2012 to 9% now is a major fiscal shock squeezing out funding for core services.

Falling or stagnant revenue is an underlying problem. While the budget does contain some tax reforms, the trajectory for revenue is negative. Adjusted for inflation, revenue falls over the forward estimates. Adjusted for population growth, revenue is already back at 2004 levels. By 2021, it will be at the lowest level seen this century. PNG Treasury is renowned for its conservative revenue forecasts. But clearly, this is not a basis on which core services can be adequately resourced. 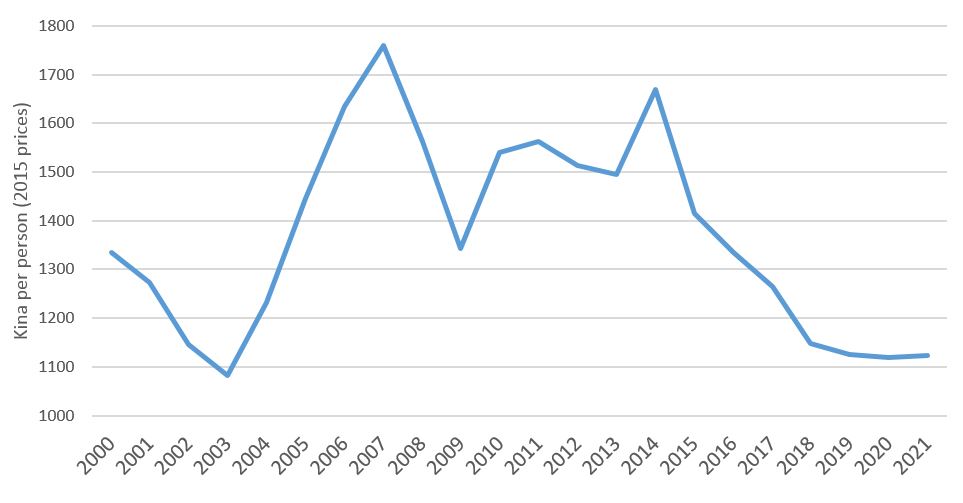 While tax compliance can be improved, the underlying problem is slow economic growth, which is projected to be just above population growth for the next five years. This is too pessimistic. Even without any further resource projects, PNG ought to be able to grow its GDP by 5% per year or more. Exchange rate depreciation and a range of economic reforms would rebuild economic confidence and allow growth and revenue to accelerate without having to wait for the next resource project.

But all of this seems to have been put in the too-hard basket. The exchange rate has been fixed since May, and the regulation of foreign exchange is increasingly intrusive. PNG may have to wait until after the 2017 elections for reforms to revive growth and prioritise core services.

Notes: Figures are actuals up to 2015. Other figures are budget and projection numbers, taken from the 2017 budget (except for the figure for 2016 MP funding which is from the 2016 budget). Supplementary budget figures used for 2016 in Figures 1 and 4; original budget in the other two. CPI from BPNG and the budget; population figures from the World Bank.