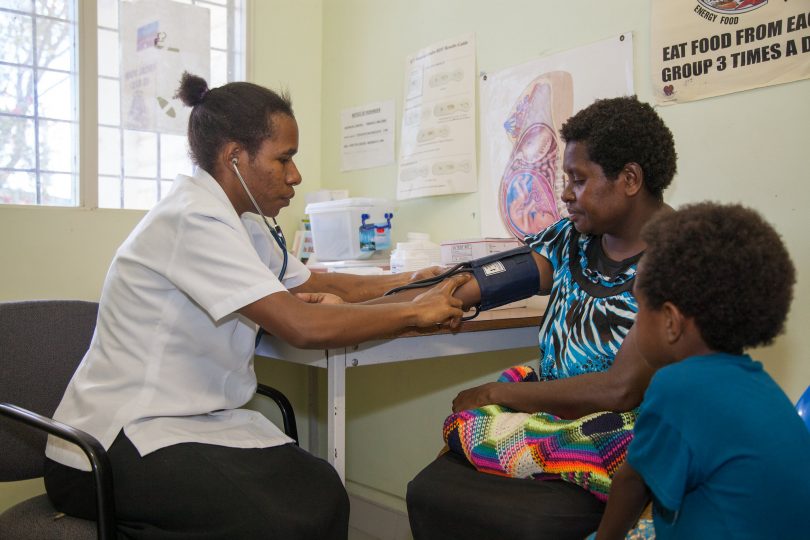 The Papua New Guinea government’s 2022 budget announcement (made in November 2021) that it intends to significantly increase health spending this year was widely welcomed. The 2022 budget allocated K2.5 billion to the health sector, a massive 39% increase in real terms on 2021 budgeted expenditure.

Increased spending on health is surely a positive, but there has been very little analysis on how the extra money will be spent. We focus on two key changes. The first is a major funding boost for church health services. The other, more questionable development is a large rise in capital expenditure.

Expenditure on church health services is set to jump by just over 70% between 2021 and 2022, even after controlling for inflation. This is a step change from the stagnation, if not decline in funding the sector has faced in recent years. With church health services administering close to half of health facilities in rural areas, and research showing that they deliver better services on average than their government counterparts, the sharp increase is long overdue. 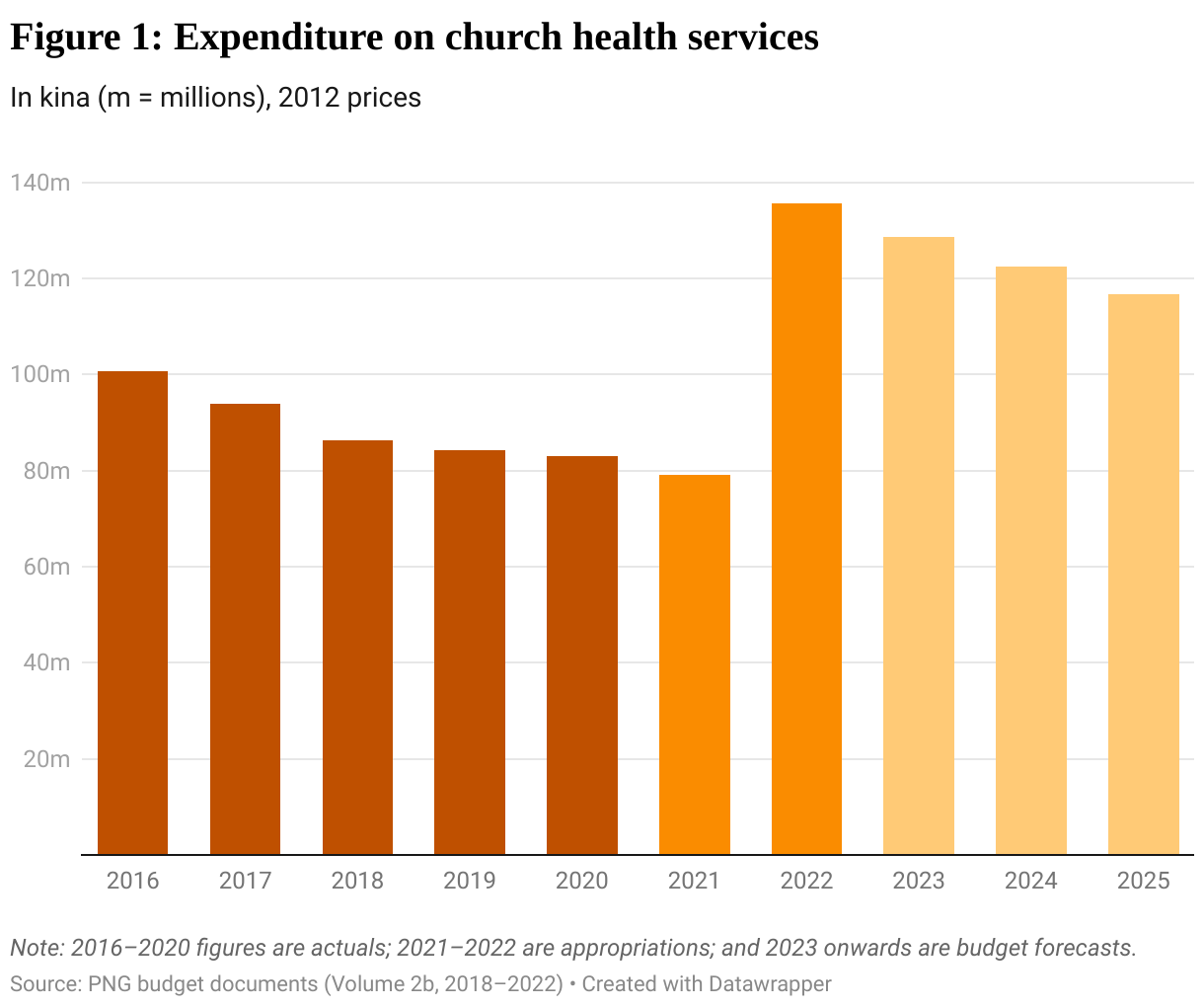 This increase is also a major win for Australian aid. Australia provided about $100 million in grant budget support to PNG (with more in loans) as part of its COVID-19 response. Some $21.5 million of this was earmarked for church health services. That’s about K50 million, half of the nominal increase of roughly K100 million from 2021 to 2022.

Moreover, the $21.5 million grant was a one-off, whereas the budgeted increase seems to be permanent. What is actually driving the increase, and making it permanent, is that according to budget documents about 6,000 church health nurses will now be paid the same as government ones. This will not in itself increase health capacity, but it has long been a grievance of these workers that they are paid less than their government counterparts, and it was something that needed to be done sooner or later.

Traditionally, Australia has shied away from supporting core PNG budget expenditure priorities because of the risk of fungibility – that any increase in funding by Australia would be offset by defunding by the PNG government. This much more positive experience may pave the way for more direct support for service delivery, which is surely more effective than the alternative of funding advisers.

The second key development in this year’s health budget is that real capital expenditure on health will increase by close to 60% in 2022 compared to the 2021 budget.

As Figure 2 shows, most of this new budgeted capex – around 85% of the difference between 2022 and 2021 – is being funded by the PNG government itself. PNG government-funded capital expenditure is set to triple in real terms in just one year. 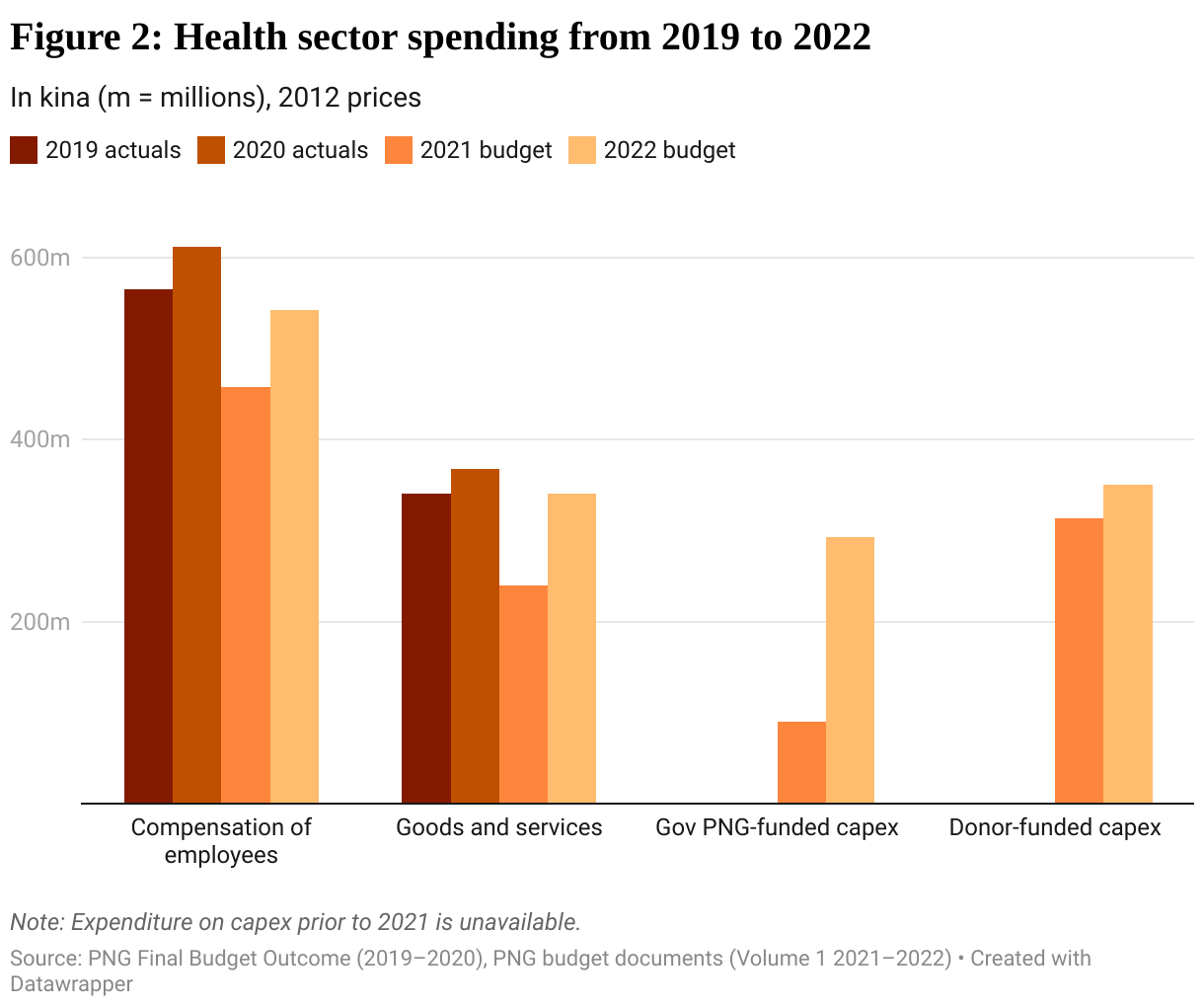 Much of this new capital expenditure seems to be going towards hospitals. Under the K285 million ‘19 Provincial Hospitals Development’ program, 19 hospitals are each set to receive K15 million in 2022. Around a fifth of this is slated for feasibility studies and project preparation, while the remainder is split roughly in half between construction and renovation, and equipment and machinery. Interestingly, capital expenditure is set to remain elevated in the medium term – each hospital is set to receive K13-20 million per year out to 2025.

Greater capital spending on health is undoubtedly important to improve the provision of health services and deepen capacity. But the urgent need is to increase spending on salaries, and goods and services (such as drugs, basic equipment, fuel for outreach and so on). Spending on these operational expenses does go up in the budget – salaries by 19% and goods and services by 42% – but fails to meaningfully improve on spending in 2019 or 2020 after accounting for inflation. (Note that the health sector salary bill has exceeded the budgeted amount by an astonishing 29% on average between 2016 and 2020).

Taken as a whole, this year’s boost to the health budget is a welcome change from the status quo. The expanded funding for churches is excellent, and the increase to operational funding welcome though modest. However, whether now is the time to greatly expand hospital capital spending, or whether there should instead have been a greater focus on expanding operational funding for critical supplies like drugs and basic medical equipment, can be debated.