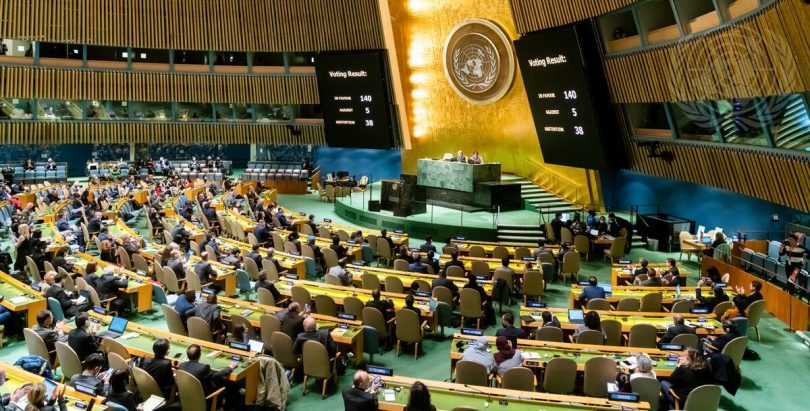 On the day of the Russian invasion of Ukraine, 24 February, the South African government had a clear message: Russia should immediately withdraw its armed forces from Ukraine in accordance with the UN Charter. Ten days later, however, in the vote in the UN General Assembly on 2 March, South Africa could not bring itself to agree to a resolution condemning Moscow’s aggression. Even more striking was the statement that Pretoria published for explanation: “all sides” were asked to abide by international law and the principles of the UN Charter.

South Africa has rightly been heavily criticised for its voting behaviour and the justification provided in its own country and on the international stage. However, this does not make it superfluous to deal with the reasons for the vote because it says a lot about what is sometimes thought and occasionally said in emerging and developing countries about the instrumentalisation of developing countries for Western interests.

Russian aggression against Ukraine is an issue that is not uniformly assessed in Latin America, Asia and the Middle East, however, different perspectives are demonstrated particularly strongly on the African continent. There is no consistently clear pan-African voice, which would speak out unequivocally against aggression, occupation and expulsion.

Overall, a clear majority of 141 of the 193 member states supported the UN General Assembly resolution condemning Russian aggression. Among the African countries, however, there were 16 abstentions, 28 supporting votes, and nine states did not even appear for the vote. Eritrea was one of the few countries, along with North Korea, to vote ‘no’.

Why Russia’s aggression in emerging and developing countries is not unanimously condemned can, in part, be explained by historical relationships: for example, the Soviet Union’s support for African liberation movements such as the African National Congress (ANC) in South Africa or SWAPO (South West Africa People’s Organisation) in Namibia. In addition, there is criticism of Western ‘double standards’, such as military interventions by the ‘West’ (primarily the US), which have taken place without a UN mandate in Africa and elsewhere: the ‘coalition of the willing’, which joined the US attack on Iraq in 2003 on the basis of manipulated ‘evidence’, is particularly badly remembered.

It can also be explained by massive human rights violations during which the international community looked the other way or played other inglorious roles: the genocide in Rwanda in 1994 is a particularly sad example of this.

An anti-Western reflex observed in a number of governments in Africa, Asia and Latin America that abstained at the General Assembly on 2 March was justified by reference to ‘non-alignment’. This idea goes back to the first Asian-African conference, which took place in 1955 in the Indonesian city of Bandung. At the time, numerous emerging and developing countries had expressed the desire to establish themselves as an independent force between East and West.

However, the first two points of the so-called ‘Bandung Principles’ adopted in Indonesia should be remembered: compliance with the UN Charter; and the sovereignty and territorial integrity of all nations. The Kenyan UN Ambassador Martin Kimani made it clear in his speech on 24 February at the UN Security Council that the colonial past is a central argument against a new colonial dominance and oppression.

I have heard some of my colleagues say, when I was speaking on the phone around the world in the last days: “You are calling on us to show solidarity for Europe. But where have you been for us in the past?” And frankly speaking, I am telling you: I hear you. We hear you. And I truly believe we should always be willing to critically question our own actions, our past engagements in the world. I am willing to do so.

This admission can be a first, important step towards making international relations more self-critical. It can be an important starting point for a new approach to international cooperation that moves away from a uniform thinking as a block and leads to a new rule-based approach. The ‘West’ should see the value in more honest international relations. And it bodes well that the number of countries with a clear position on the brutality of Russian imperialism far exceeds any perceived or real group of ‘Western countries’.

Stephan Klingebiel is Chair of ‘International and Transnational Cooperation’ research program at the German Development Institute (Deutsches Institut für Entwicklungspolitik/DIE), a senior lecturer at the University of Marburg, and an honorary distinguished fellow at the Centre for Sustainability at Jindal School of Government and Public Policy in India.