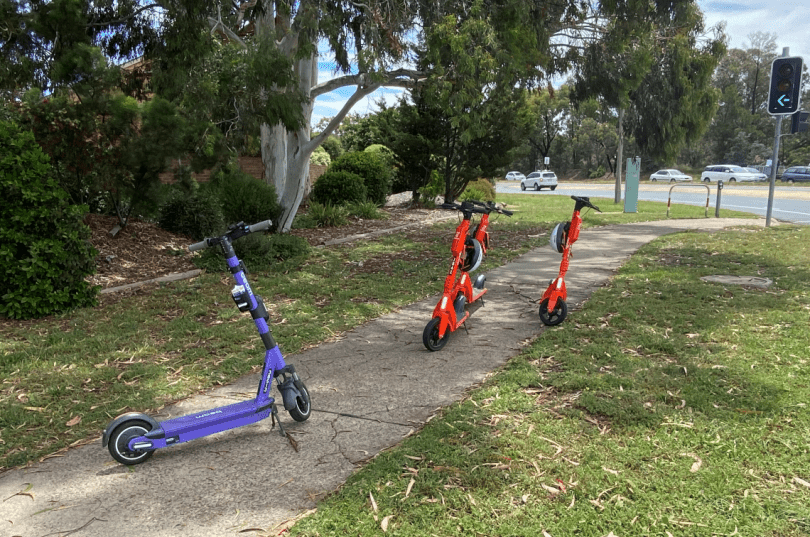 It was when I saw the young man with a Salvador Dali moustache sitting on a milk crate on a hired electric scooter, cigarette dangling from his mouth and waving his helmet around like a starter’s flag that I began to wonder about the degree to which development planning can account for the complexities of human nature.

Pay-as-you-ride scooters seem everywhere in Australian cities these days, part of a wider shift towards urban mobility solutions and reducing reliance on the car. They’re the whizzier siblings of the shared bicycles rolled out a few years ago, a few of which now look like they’ve seen better days.

I live in Canberra and all around the capital one can see people careering around in the distinctive orange and purple painted liveries of the two companies that operate the services. They are simple to use and fun to ride. My kids think I look swashbuckling as I reach speeds of 15 km per hour up and down our street.

They also seem well-designed in a sensible, presuming all people are rational sort of way. A safety helmet comes with each scooter. As per the set-up, the rider is required to ‘un-click’ the helmet from its holster before the ride can commence. No one under the age of 18 can ride and the rules state that drinking and scooting is not on.

The fellow on the milk crate wasn’t the only one giving the middle finger to the preconceptions of how riders should behave. There are people comfortably under the age limit journeying around on them, much to my own kids’ consternation. I haven’t done a pub test, but one could imagine a scoot home after a few thirst quenchers is a tempting prospect. The police are perturbed.

Now, what’s all this got to do with the carefully-written and frequently lengthy designs for international development programs, a bunch of which I’ve been perusing over the last month or so? I believe it has a lot. Because if something as relatively simple as forecasting how a human is going to use a scooter can’t be predicted readily, good luck trying to predict with certainty how a program taking place in a complex ecosystem of people, personalities and politics is going to unfold.

Some of my readings of these design documents have been retrospective. As part of evaluations, I’ve been comparing what was intended to be achieved with what has transpired. Others have been prospective – looking at documents specifying what is to happen over extended time horizons.

For the ‘compare and contrast’ reviews, implementation never turned out as foreseen in the design. This is hardly surprising. Life rarely happens according to plan. Unexpected events happen, people in positions of authority change, political positions shift, enthusiasms wane, pandemics happen.

What is surprising, however, is that the same prescriptive approach of trying to specify goals years in advance and the pathways to achieve them is tried again and again.

I’ve read a number of such documents recently. Irrespective of funder, they share common mechanical characteristics. Although aid has metabolised the language of innovation, adaption and iteration, documents which specify what is to happen have not. Problems are pre-identified, outcomes are pre-specified. Positions are pre-ordained such as program manager, political economy guru, GEDSI (Gender Equality, Disability and Social Inclusion) maven and a few M&E hands. A risk matrix is presented as a table in a far-off annex which one has to tilt one’s head at a 90-degree angle to take in. A partner government is always itching to get started.

What design documents rarely do is acknowledge that the most difficult thing to predict is the future, and the multiple dimensions of uncertainty in decision-making and implementation that will inevitably occur. Some designs have time frames of more than a decade. It is hard to see that far into the future. How this year unfolded would have been impossible to foresee from the foothills of January. Ten years ago, Barack Obama was in the middle of his first term; no one could have foreseen how US government policy would zig and zag in the years since.

I’m increasingly enamoured by the idea of looking at life through a complexity lens, something I’ve written about on the blog before in a review of a book on the subject.

Together with my ANU RegNet colleagues Miranda Forsyth and Anthea Roberts, we’ve been trying to figure out how to apply complexity theory to real-world governance challenges, most of which are like international development.

We’ve found great utility in the Cynefin framework, which puts the situations we face in four domains: simple, complicated, complex and chaotic.

A critical concept in complexity theory is emergence: the behaviour of systems emerges and evolves over time from the interaction of its parts and thus cannot be readily predicted. In systems of complexity, ideas emerge and interact in dynamic and unpredictable ways, so there are clear limits to what can be known and understood in advance. This could be anything from a shift in personnel, to the Chinese flag being raised in a country which had previously recognised Taiwan, to interest levels from ‘partner governments’ waxing and waning.

The implication is the need to move away from thinking in terms of a perfect design and instead about how programs can intervene in a complex environment, adapting and changing in response to cues, feedback loops and events.

The scooters are a simple problem: it is a minority of riders who don’t use them as intended and I’m sure there’s thought going on now as to how to address the problems of helmet and kiddie use.

International development, as this strange year has amply reminded us, tends towards the chaotic far more than a scooter. Working across decades, languages, borders, pandemics and multiple manifestations of the unforeseen is inevitable.

Clearer thinking about how we can incorporate the reality of complexity into designing development programs is long overdue. Do we need to rethink the concept of the long and windy design document itself? Might it be better to put in place parameters and principles, accepting complexity?