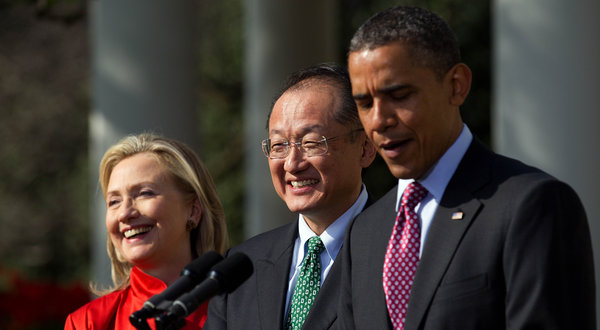 On Friday, March 23, the World Bank announced three nominees that would be considered for the position of President:

Jim Yong Kim (see bio here): a South Korean born US citizen, infectious disease specialist, former Director of the WHO department of HIV/AIDS and current President of Dartmouth College. Dr Kim is Barack Obama’sofficial nomination, and consequently the frontrunner for the position. The nomination has received praise both at home and abroad.  In particular renowned economist Jeffery Sachs stated Dr Kim is an “excellent choice” and withdrew his candidacy in response (see here),

However not all experts are so happy.  In particular Lant Pritchett, a Harvard Professor and 17 year World Bank veteran, argues nominating Kim is a “terrible idea” (see here) and his appointment is “an embarrassment to the U.S. You cannot with a straight face say this person is the most qualified to lead the World Bank.” He explains further that “development is about countries becoming prosperous, democratic and capable, like being able to deliver the mail, having police forces that work and kids who get educated” and not related to the “charity work” undertaken by Dr. Kim.  He adds “there’s no question that Kim has done terrific things, but I wouldn’t nominate Mother Teresa to head the World Bank if she were still alive.”

José Antonio Ocampo (see bio here): former Columbian Finance Minister, UN executive and currently a Professor at Columbia University. Dr Ocampo was nominated by Brazil for the position. A detailed justification of his candidacy can be found here. Columbia, however, had already dismissed his candidacy as not being viable as another Columbian already heads the Inter-American development bank.

Ngozi Okonjo-Iweala (see bio here), a former World Bank Managing Director and Nigeria’s current Coordinating Minister of the Economy and Minister of Finance. Probably the most discussed candidate from outside of the US to this point, Dr Okonji-Iweala was nominated by South Africa, Angola and Nigeria. Lant Pritchett justifies her candidacy here.

Missing is any candidate nominated by Asia. China was quick to welcome the US nomination. For those thinking that this century is going to belong to Asia, this comes as a surprise. If Africa could manage to defy the assumption that the Bank Presidency belongs to the U.S, why couldn’t Asia? Either Asian countries can’t find it in them to co-operate on such endeavours, or the World Bank presidency just isn’t that much of an incentive.

The World Bank’s Executive Directors will now conduct formal interviews of the three in Washington D.C. in the coming weeks, with the expectation of selecting the new President by consensus by the 2012 Spring Meetings slated for April 21-23.

Earlier this month the Bank announced that the number of people living in extreme poverty and the poverty rate declined in every region of the developing world during 2005-2008, and probably again in 2010. This is the first time this has ever happened over a three-year monitoring cycle in the Bank’s history of tracking extreme poverty. This is good news for global development, but also shows that there is still much to be done. The economist also reports on the findings here.

Not everyone is convinced these figures are such good news, with Robin Broad and John Cavanagh reporting here that the figures don’t actually say anything about the impact of the recession due to a lack of up-to-date data and arguing that number have been skewed by the rapid decline of poverty in China.

What started last Wednesday as a mutiny of low-ranking officers and rank-and-file soldiers under the leadership of Amadou Sanogo turned into a full-blown coup d’etat in Mali, with Captain Sanogo now claiming to be in control of the country. Rebels in the north of the country seeking to create a separate state have taken advantage of the coup and increased violence in the country. In response to the suspension of democracy and the deteriorating security conditions in the country, the EU (see here), the World Bank and the African Development Bank (see here) have suspended all developmental operations and project financing, beyond emergency assistance, to Mali. With major bilateral agencies likely to follow suit (see Canada here and the US here), this could mean the loss of hundreds of millions in developmental assistance to one of the poorest countries in the world.

The UK’s Independent Commission for Aid Impact released three new reports last week. Of particular note was one of the reports outlining the extent that fraud in Afghanistan poses a threat for aid impact, detailed here.

The UK has announced that it will be stopping its aid programme to India after 2015, as predicted in a recent Devpolicy post discussing the scandal.

Nancy Birdsall, President of the CGD, reflects on her “thrilling and discouraging” experiences of finally visiting a Millennium Village in Ethiopia.

Secretary Clinton faced Congressional committee hearings on the international affairs budget (similar to Australia’s Senate Estimates, covered on the blog here), summarised by Will McKitterick from the CGD here.

A new CGD working paper asks the question “How Much Does Natural Resource Extraction Really Diminish National Wealth?” coming to the conclusion that environmental constraints are far more likely than the actual exhaustion of deposits to limit resource-based development.

A new briefing paper, put together by nine development NGOs, shares the lessons learned based on their experience of promoting gender equality and working with women smallholders and rural women over many decades.