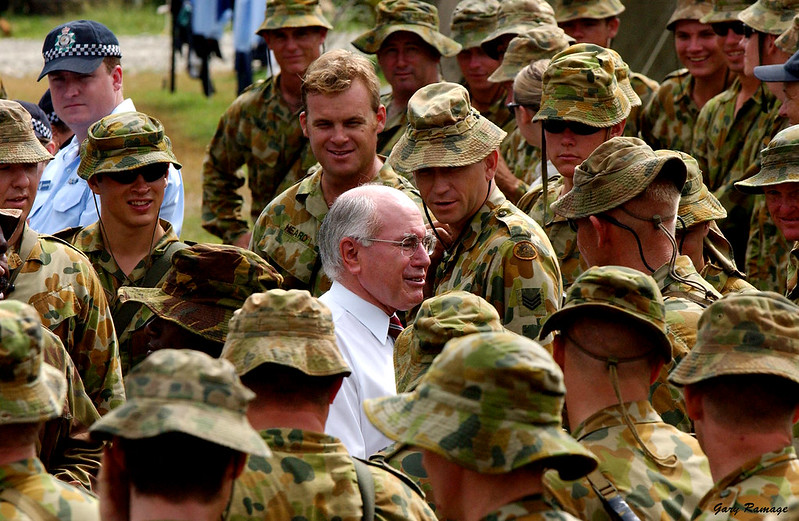 One of the noticeable features of Australia’s response to the Solomon Islands government’s request for security assistance on 25 November was Scott Morrison’s instinctive desire to broaden the response to a regional level. Solomon Islands Prime Minister Sogavare reached out separately to Papua New Guinea – something welcomed by Australia – but Australia acted quickly to encourage at first Fiji, and then New Zealand, to contribute personnel.

Unexpectedly, the deployments have given a fresh lease of life to a persistent and curious claim about the origins of the Regional Assistance Mission to Solomon Islands (RAMSI) in 2003: that, but for the intervention of then New Zealand Prime Minister Helen Clark, RAMSI would have been an Australian-only operation.

The claim emerged in a chapter by Nicola Baker in The New Pacific Diplomacy (2016), co-edited by Greg Fry and Sandra Tarte. In his own definitive history of Pacific regionalism, Framing the Islands (2019), Fry endorsed Baker’s judgement, writing that she had argued “persuasively” on this point. But what is the evidence for the claim?

Baker cites two New Zealand Herald stories as evidence. The first, by Audrey Young, was written in the wake of the 2006 riots in Honiara. Although not quoting anyone directly, Young wrote that “[Clark] negotiated hard with Howard on the ground rules for Ramsi [sic] and both have a strong sense of investment in it. New Zealand insisted on the approval of the Pacific Islands Forum and the involvement of as many island states as possible – not to mention the invitation of the host country.” (Note here the insinuation that Australia might have been contemplating an intervention in the absence of an invitation from Solomon Islands.)

The second story, by Claire Trevett, was written at the time of the 2008 Pacific Islands Forum leaders meeting in Niue. The story quotes Clark as saying “We had to work very hard to see that it actually had a Pacific flavour. It became a mission mounted really under the auspices of the forum, rather than just being an Australia/Solomons bilateral initiative.”

Clark was asked directly about this set of claims during a recent Twitter discussion. She did not repeat the view attributed to her by Young and (more emphatically) Trevett that it was she who was responsible for turning RAMSI into a regional exercise. She posted as follows: “Details are lost in the mists of time, unless detailed research is done on Cabinet papers & my press conferences at the time. I was concerned that RAMSI not be an Iraq-lookalike, that Solomons Govt had agency & that its capacity was built, & that PIF nations were involved.”

Well, one person who has done detailed research on Cabinet papers is Australian historian Bob Breen, author of The Good Neighbour, the fifth volume of the official history of Australian peacekeeping which focusses on the south-west Pacific. Breen’s work provides no evidence to support the claim that Australia was planning a unilateral intervention, let alone one that would be launched without an invitation from Solomon Islands. On the contrary, Breen quotes a May 2003 letter from then Foreign Minister Alexander Downer to Prime Minister John Howard stipulating that an intervention “had to be at the invitation of the Solomon Islands Government, receive the endorsement of the Pacific Islands Forum and be accompanied by Pacific Islands military and police contingents.” If, prior to this letter, there were high level communications between Prime Ministers Clark and Howard which influenced the latter’s thinking, they are not recorded in the voluminous papers canvassed by Breen, nor in the interviews he conducted as part of his research, including with Howard.

Quite apart from the documentary record, though, how plausible is it that the Australian Government would have planned a unilateral intervention in 2003? This was a time when the South Pacific Peacekeeping Force to Bougainville (1994), the Bougainville Truce and Peace Monitoring operations (from 1997 and still in place in 2003), INTERFET in East Timor (1999-2000), not to mention the International Peace Monitoring Team in Solomon Islands itself (2000-2002) were still fresh in everyone’s minds as models for regional security cooperation. Australia played a leading role in all of these operations, every one of which was organised along regional (and international in the case of INTERFET) lines. This would surely suggest that even back in 2003 – the mists of time if you like – Australia well understood the utility and legitimacy offered by collective rather than unilateral action in its immediate region. And it is beyond implausible that Australia would have launched an intervention in the absence of an invitation to do so from the government of Solomon Islands.

It is true that there were debates between Australia and New Zealand about the posture of the initial RAMSI deployment: to put it crudely, Australia argued for a ‘shock and awe’ approach as against New Zealand’s preference for a more ‘softly softly’ approach. Those debates (and the impacts of the decisions made) are more interesting and indeed more relevant to the current situation in Solomon Islands than any origin debate for which the evidence is scant – although that is a story for another time and place.

The idea that Australia might have been planning a unilateral intervention in Solomon Islands in 2003 serves a conventional (and rather lazy) narrative which contrasts Australia’s supposed insensitivity in the region to New Zealand’s cultural competence. But that doesn’t make it true. Breen’s book may not necessarily be the last word on this subject, but until better evidence comes along, we are surely entitled to exercise scepticism about the claims originally reported by Young and Trevett.

James Batley was RAMSI Special Coordinator from 2004-2006. This research was supported by the Pacific Research Program, with funding from the Department of Foreign Affairs and Trade. The views are those of the author only.