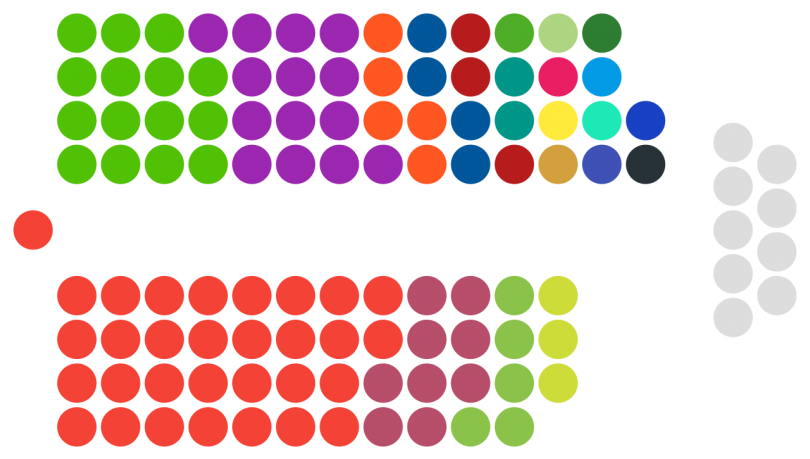 Seats held by each party in PNG's 10th Parliament as of December 2017 (Credit: Wikipedia)

Coalition governments are popular feature of parliamentary democracy. Since 1972, PNG has had coalition governments. As explained in this survey, one theory is that to minimise the bargaining cost of coalitions with different policies, parties with the smallest ideological differences tend to form a coalition. Another approach is the “office-oriented” theory, whereby parties seek to form a winning coalition with the goal of securing a majority of the portfolios. This group would restrict the number of political parties in an attempt to maximize their portfolio numbers. However, if MPs from a few parties are not sufficient to form government, numerous parties can combine, with the major party in the coalition negotiating and controlling the distribution of portfolios.

In general, PNG’s political parties lack political ideology, but parties do have some policies. For this blog, I look at each party’s education policies (whether they support free or subsidized schooling) and their position on regional autonomy to see what impact, if any, policy similarities and differences had on coalition formation. These two areas were chosen because they seem to be the only ones where parties have relatively clear policy positions. 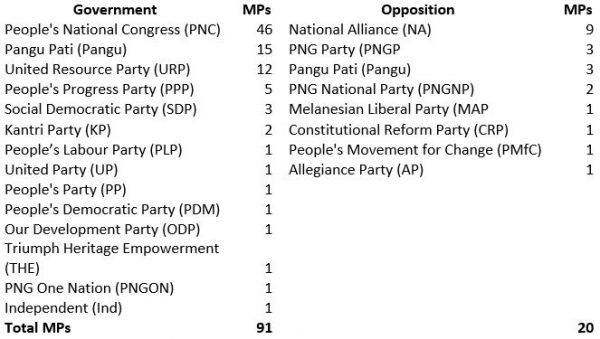 Based on analysis of their speeches and other material in the run up to the 2017 elections, four political parties – PNC, PPP, SDP and PNGP – support no tuition (school) fees, and two parties – Pangu and NA – advocate for subsidised tuition fees (Table 2). The other parties do not have a clear position on whether there should be tuition fees or not.

A coalition based on free education would have had PNC, PPP, SDP, and PNGP with 57 MPs on one side, and NA and Pangu on the other side with 27 MPs. Currently, as shown in Table 1, NA is in the opposition with only two Pangu MPs and PNGP, whilst the rest of the Pangu MPs are out of place in the government coalition with PNC, PPP, and SDP.

A coalition based on policies supporting regional autonomy would have had PNC, NA and PPP on the same side. PPP has advocated for autonomy as a policy since 2008. Leading up to the 2017 elections, Peter O’Neil stated that New Ireland East and East New Britain would be granted autonomy, and the Bougainville referendum would go ahead in 2019. This was captured in Alotau Accord II, a coalition agreement. It became a key element in attracting PPP to the coalition. Following the seminar on the Bougainville Referendum hosted by the National Research Institute (NRI) in June 2018, East Sepik Governor Allan Bird from the National Alliance party talked about his desire for Greater Sepik Autonomy on Facebook. The other parties do not have a clear position on autonomy. Table 3 shows what a coalition would look like if based on pro-autonomy policies. However, as Table 1 shows, NA is in fact in the opposition.

On education, Pangu’s policies are incompatible with the government coalition (PNC, PP and SDP), and yet it joined the government. PNGP is content to remain with the opposition despite having similar policies on education as PNC, PPP and SDP. PNC, SDP and PPP have a similar free education policy. However, senior PPP MPs (Ben Micah and Julias Chan) joined the opposition in an attempt to oust Peter O’Neil (PNC) as Prime Minister in 2016. The role of education policy in determining a coalition is therefore not clear. On autonomy, the only clear case is PPP’s decision to join the coalition, which was largely based on Peter O’Neil’s (PNC) promise of autonomy.

This analysis confirms that what best explains the decisions of political parties in PNG is not policy or ideology but the interest of MPs in attaining Cabinet portfolios and gaining access to financial resources (DSIP/PSIP). There are 31 ministries, 12 vice-ministries, and 31 permanent committee chairmen positions that the government distributes. The major party in the coalition, PNC, acts as the centripetal force, distributing these portfolios. PNC holds 20 of the 31 portfolios, URP has four, PPP three, Pangu two and SDP and UP have one each. The portfolios are roughly proportional to the number of MPs each party has except Pangu, which has two portfolios despite having the second largest MPs in the coalition. This is because Pangu joined the coalition late.

The opposition awaits the end of the grace period in order to to replace the government coalition via a vote of no confidence. Based on this analysis, their interest is in government portfolios rather than government policies.

Since this post was published, an error in Table 3 has been corrected to reflect the actual number of MPs in the National Alliance (NA) who support autonomy – nine.