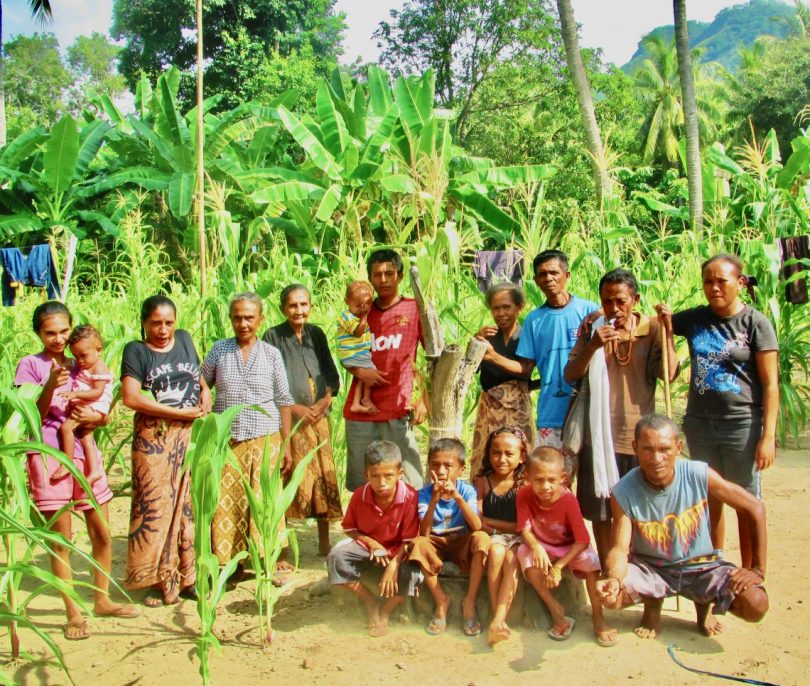 Family from Oecussi, Timor-Leste, gather around the altar they use to pay homage to their ancestors (hau mone) at the feast of the new corn (Michael Rose)

In little more than ten years Australia’s Seasonal Worker Programme (SWP) has gone from nothing to an essential element of how Australia feeds itself. Around 12,000 people from Timor-Leste and Pacific Island countries participated in 2018–2019, and across the region people are clamouring to join. Although the program, like everything else to do with international movement, now sits in a state of anxious stasis, there is every reason to believe that it will continue to grow.

Despite its popularity and obvious benefits for both employers and workers, among some academics and policymakers enthusiasm for the program has been qualified. Some have gone so far as to raise concerns that remittances might foster a state of ‘dependence’, encouraging people to give up their previous livelihood strategies in favour of waiting passively for money from abroad. Others argue that to avoid this and reach its full potential, the labour sending aspect of the SWP needs to be undertaken in parallel with efforts to ensure that funds earned through it are used on something ‘productive’.

Such perspectives are certainly worthy of consideration, but, at least in the case of Timor-Leste, miss an essential reality. There the SWP, like the other Timorese livelihood strategies that anthropologists have described extensively over the past half-century or so (see, for example, here, here, here, here and here), sits within the encompassing life system that is the Timorese extended family. Although this way of being in the world has, historically, been a politically and economically subaltern position, it has also evinced extraordinary resilience and adaptability, and continues to be central to how most Timorese think about work and wealth today. Admittedly, for a foreign observer thinking about labour mobility this may be somewhat difficult to perceive – you can’t Google it and it won’t show up in a survey alone – but it aligns with both the ethnographic literature and plainly observable reality of quotidian life in Timor’s villages. The socio-economic impact of the SWP in Timor is an essential field of research, but it must not ignore the primary mechanism that mediates it.

The continuing importance of the Timorese family/clan to contemporary governance and livelihood seeking in Timor is a study in itself but the basics are simple enough. Life for most in Timor is ordered by their position within a network of kin. The nature and extent of these networks vary from place to place but are generally characterised by ritual exchange between ‘bride taking’ and ‘bride giving’ families (fetosan and unmane), patronage relationships, the offering of tribute to common ancestors, and an encompassing ethic of intragroup mutual aid.

In terms of the SWP and its development impact, it is this last aspect of mutual aid that is most salient. Within their extended family Timorese are, in theory, assured of somewhere to be, something to eat, and something to do, and in return are expected to give back what they can.

The expression of this system has shifted along with Timor’s economic, ecological and political circumstances, but it remains important. Professor of Anthropology Andrew McWilliam has argued this explicitly, going so far as to describe people within the Timorese diaspora in the United Kingdom whose globe spanning work is integrated into local frameworks as ‘customary moderns’.

In thinking about what this might mean for the SWP’s impact on development in Timor the key point is that now, as in the past, the Timorese extended family is a system that seeks to advance the social status, productive capacity, and wellbeing of its members. Both my own observations over a year of speaking to returned SWP workers, and the published research (see here and here) suggest that this principle is indeed guiding how people use remitted funds.

Returned workers and their communities build healthier houses, buy new farming and transport equipment, send children to school and siblings to university (often in Indonesia), purchase phones to stay better connected with the world, expand household enterprises, and invest in ritual gifting and exchange. This is anything but passive consumption, and gestures to the utility of the SWP as an engine for economic diversification, not dependence.

In the past the ability of the Timorese extended family to build the capacity of its members to act in the outside world was limited by geographical isolation, lack of access to outside capital, and the concentration of risk in a single economic activity, specifically subsistence agriculture, that made innovation risky and kept people very poor. The rise of labour migration as a livelihood strategy loosens these constraints. While it is true that no country has ever become rich off labour mobility alone, an extended family hooked into income from abroad is likely better educated, better fed, less anxious about their subsistence, and more worldly. The proliferation of such households can only increase Timor’s prospects in decades to come.

The people of Timor-Leste, though best known to the outside world for their struggles with war and poverty, have a long history of acting collectively to advance their own interests using the resources at hand. The SWP represents a new sort of opportunity, but it is clear that the same collective frameworks that have served Timor well in the past are being adapted to take advantage of it. From an Australian perspective the best thing we can do is simply ensure that the SWP continues to grow and as many can benefit from it as possible.